Yellams: Seattle In A Day.

By sheer accident, our visit to Seattle happened during Navy Fleet Week. The good news is that we will get to see Blue Angel practice flights in a clear blue sky over Puget Sound. It doesn’t get much better than that.

The bad news is that we’re doing it with a great many other tourists and Washingtonians -- coming from all over the state.

The crowds are huge at the waterfront.

﻿
So what’s at Seattle? Well… besides the thrill of the waterfront area, how ’bout seeing Bill Gates’ home, the Space Needle, Jimi Hendrix’s grave and the original Starbucks.

A most famous Seattle attraction isn’t even in Seattle -- it’s Mount Rainier, some 50 miles away. It makes a beautiful backdrop in so many scenes.

I’m not a big fan of large cities and the Olympia,-Seattle-Tacoma area is no exception. Traffic is heavy and much like southeast Florida as I remember it from our years there -- long lines of automobiles stretch from one city to the next most of the day. 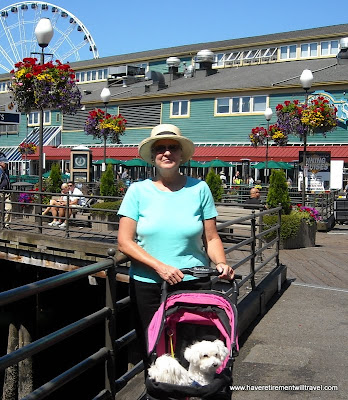 Nevertheless, the weather is nice, albeit a might on the warm side (high 80‘s today), but pleasant in the shade.


Lexie and Ozzie were loaded into their pink stroller and we toured Seattle’s waterside piers. We watched the Blue Angel flight practice, ate seafood, shopped and took in all the sights, sounds, including a wedding in progress on one of the docks.

We did not ride the huge Ferris wheel in the pictures and I will not elaborate as to my reasons but you can probably guess.... 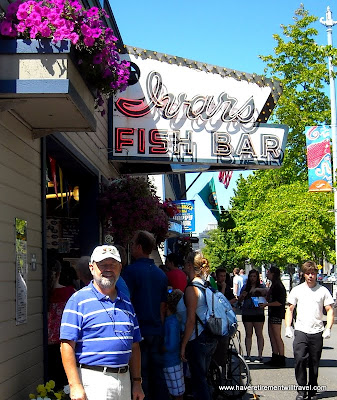 Lunch at Ivar’s Fish Bar here in Seattle was a delicious basket of fried clams, crab salad and seafood chowder.


We ate at a table in the outdoor pavilion that’s  nearly always full of people.  I think we were luck to get a table.


Really good food and pleasant conversation with some locals.


Once we were fully exhausted, we returned to the car to retrieve our bonus for visiting Seattle -- a $44 parking ticket.

﻿ A regular challenge for our day outings is finding a place to walk the dogs. Our choice is to find a park that has concrete sidewalks and a mix of sun and shade and not too many children.

Our dogs are psychotic. Probably because of their puppymill history, they don't like walking on grass and can't walk on gravel. Lexie doesn't like being in bright sunlight (maybe some pending vision problems) and both dogs are afraid of children.

In today's search for a good dog walking spot, we happened upon this interesting sign.


Next stop is the Seattle Space Needle -- completed in 1962 for the 1963 World’s Fair.  This year there are many 50th Anniversary events taking place with memorabilia displayed on the observation deck.  A view from this vantage point is exciting even though I don't like heights.


Finding Seattle's Space Needle took some doing, even with Lady GaGa (the gps) as there are so many narrow one-way streets in the area. 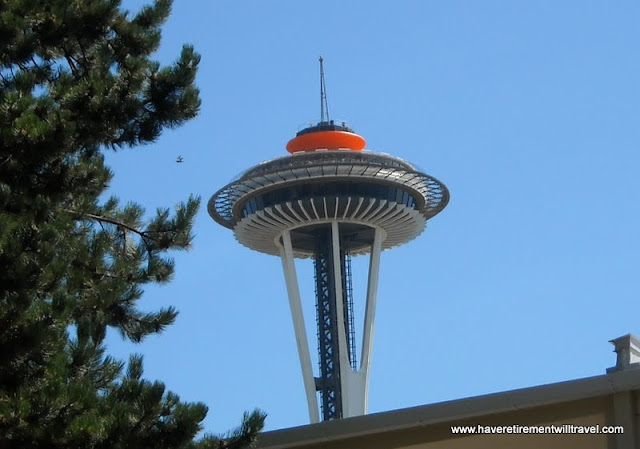 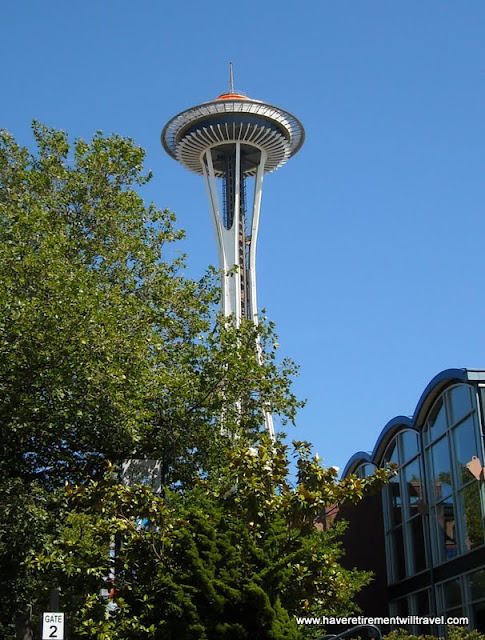 In the end, we found a space at the bottom of the hill, several blocks away from the Space Needle. It was a nice shady spot, suitable for leaving Lexie and Ozzie alone in the car for awhile.

After walking about half-way back up that hill, we decided we didn’t want to fight the crowd to go inside the needle. We took a picture from this intersection and returned to the car, hot and tired. 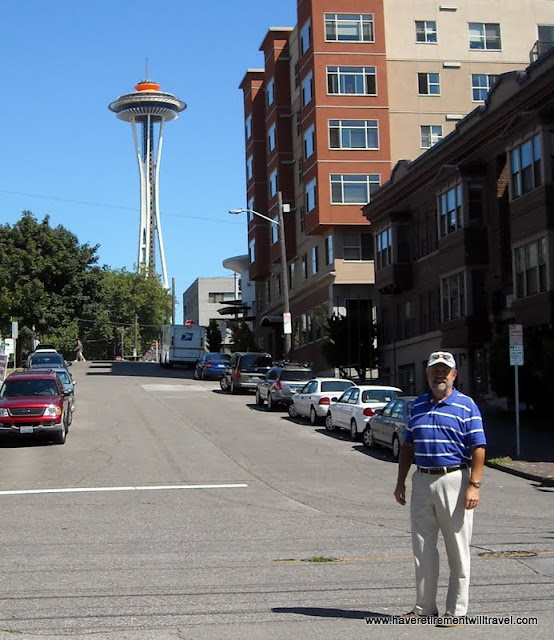 The ride out of Seattle and back to the campground took nearly an hour. We were welcomed home by another glorious near-dusk view of Mount Rainier from our living room.