It doesn't take long for us to get homesick for the United States.  Don't get me wrong, I love Canada. It's my father's homeland, I still have relatives here and I'm proud of all that.  But the day after we visited Whistler we decided to come home.

Despite the ferrys, border crossings and island hopping, we've remained within a small area, geographically, ever since Port Townsend.  At Squamish, we're barely a half day from the US Border at Blaine, Washington.  That's where we'll celebrate our "homecoming" today.

The return ride south on the Sea To Sky Highway was almost as awesome going south as it had been going north.  It might have been even better because it was easier for me to hold my camera out the window for photographs.

Metro Vancouver was different though.  Oh! What traffic!  Road construction... signs everywhere. Bridges being built, resurfacing and narrow lanes. But we did it.  Here are some of the traffic photos.
﻿

Aside from the harrowing drive, he ride was uneventful.... Until we got within two miles of the border.  Electronic signs warned the wait through this border crossing might be as much as an hour.  Fine -- we'll eat lunch while we wait. 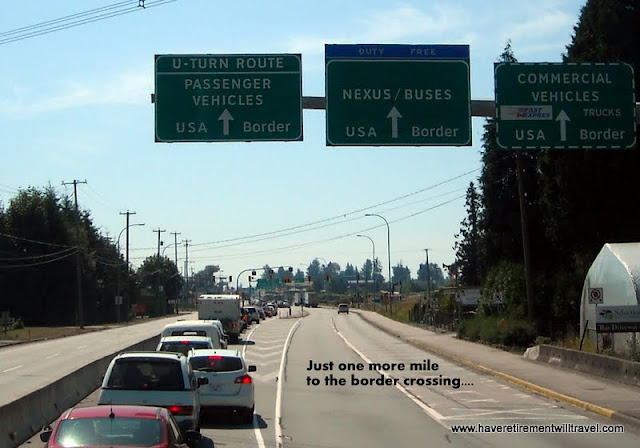 And finally, after the anticipated hour (give or take), we reached the border station.

Wayne and I are law abiders. . Anything we're supposed to do we do and the same goes for things we aren't suppose to do.  We are pretty truthful too -- especially when crossing the border.

Last year when we came through this same Blaine, Washington border crossing into Canada, we were held up for a random search and I thought it was a pretty stupid choice on the Canadian Border Patrol's part to select us.  After all, with all the electronics available it's easy to check us out without a search.  But that was then -- this is now.

As we approached the drive-through US Customs window, signs warned that we should "declare" everything.  Now what does that really mean?  Our turn came to pull 64 foot of rolling residence through the narrow lane.  "Did we buy anything?  Yes. Two T-shirts, less than $30 value combined."
"Are we bringing any produce into the United States?  Yes. Two bunches of leaf lettuce."  "Anything else? Yes, a sweet potato."  I guess that did it. We were sent into a crowded parking lot I was sure we'd never get out of without taking out a few cars.  A US Border Patrol guy opened the RV door and told us to leave all cell phones aboard and vacate the coach.  We were also instructed to "leave the key in the ignition".  When Wayne reached for his cash, the officer asked how much money he had!  Geepers, is nothing sacred?

The officer pointed to a bank of concrete kennels and told me to "put the dogs in the kennels."  Horrors.  I asked if I could just hold the dogs? No. Can I just walk them?  He replied, "Lady, we have working dogs here who would kill your dogs.  Put them in the kennels."  No smiles.  Ouch, that was rough. I placed Lexie and Ozzie into one of the enormous concrete kennels and went with Wayne into the building to see "the Agricultural officer" who turned out to be a pretty nice guy.  I completed a form that asked a bunch of questions and I signed it. The officer told us to stay inside the building while he went into our coach.  What can one say or do at that point?

Ten minutes later the nicer officer returned with two California navel oranges I had bought in Oregon. They still had the stickers on them.  He also had a single sweet potato.  My vegetables and fruit had been confiscated. I don't know why. The Canadian leaf lettuce remained in the coach. Again, I don't know why.

This whole border crossing episode from Canada into the United States took two to two and a half hours. We were beat exhausted and found a campground within twenty miles to recover for a day or two.  Annoying as it was, this is, apparently, the price we continue to pay for freedom.
Email ThisBlogThis!Share to TwitterShare to FacebookShare to Pinterest