That's Why They Call It "The Mountain"

There's a small town in south central Washington named Randle and that's where we've been "holed up" while out of touch last week.  We've been quiet because there's no signal for cell or internet service here.  Horrified at first, we came to enjoy the peace and quiet within a few hours.

We visited Cliff and Janice at Shady Firs RV and Mobile Home Park for a little less than a week. The solitude was appreciated and the campground is truly a wilderness paradise.  I wholeheartedly recommend a visit here!  The campground is located about 2 miles east of the town of Randle; it's convenient to both Mount Rainier and Mount St Helens. We won't visit the later this time as we were just there last summer.
We chose Shady Firs RV Park as our destination because it is about halfway between the Nisqually Entrance and the Ohanapecosh Visitor Center of Mount Rainier National Park -- yet another on our list of national parks to visit.  Neither of us has been here 'till now and we're excited to have beautiful weather forecast for our time here.  The day we visited the park, we entered at Ohanapecosh and exited at Nisqually.

About Mount Rainier....it's not only the highest mountain in Washington, but in the whole Cascade Range. On clear days, it dominates the views from Tacoma and Seattle and on exceptionally clear days, can be see from as far away as Portland and Victoria, British Columbia in Canada.  "The Mountain" as it is called by the locals, is the most glaciated mountain in the lower 48 states with over 26 glaciers and two, yes two volcanic craters!  Again, that's why they call it, "The Mountain" in these parts, pardner.

Climbing Mount Rainier... Some 10,000 climbers attempt Mount Rainier each year and less than half of them make it. Weather conditions and physical exhaustion are common reasons for failure.  In 1946 a plane crashed into the mountain killed 32 people. The worst mountaineering accident on Mount Rainier happened in 1981, when eleven people died in an ice fall on the Ingraham Glacier. More recently, a National Park Ranger died trying to save climbers trapped in a storm on the mountain.  The Ranger lost his footing and slid nearly 4000 feet to his death.

Deaths also occur every year from rock and ice falling, avalanches and hypothermia.

Look Out Below... Mount Rainier is an active volcano and serves as an awesome reminder of the beauty and power of nature.  Like many other Cascade range mountains, Mount Rainier has the potential to erupt again at any time, although archaeologists expect it will give warning.

Huge amounts of precipitation falls at Mount Rainier. As snow, it shapes the glaciers; as rain, it feeds the dense stands of  Douglas fir, western red-cedar and western hemlock trees abundant here.

There are so many beautiful scenes among my hundreds of photos, I've just chosen a little of everything, including a few of us, to display here. 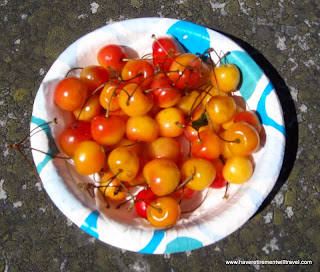 From the Stevens Canyon Entrance, we passed Silver Falls and looped around Backbone Ridge before reaching Box Canyon where we stopped again for a good long while.


At one of our many stops, we broke out lunch and enjoyed a few of the Mount Rainier cherries I bought at a roadside vendor.  Delicious. 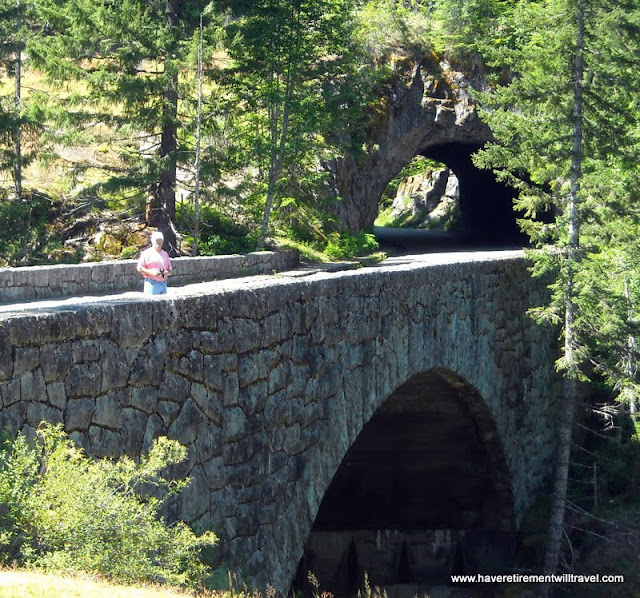 I took a short trail here and attempted a short video, at which I am absolutely terrible, but trying.  If you want to see what I saw, click this link:  Box Canyon Of The Cowlitz .  Alongside the walkway, I could see interesting ice-smoothed rock from the days glaciers were here. 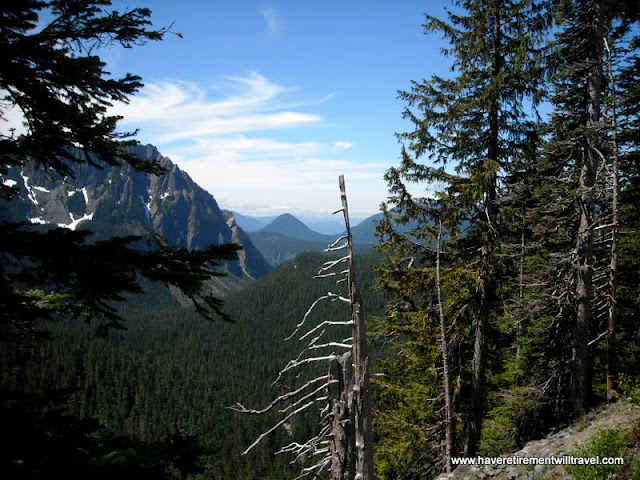 By the end of the day, we were exhausted and appreciated the quiet, cool serenity awaiting us at Shady Firs.

Over the next few days, we groomed the dogs, washed the coach and car and visited with Cliff and Janice when they took a break from their 20 hour days.  We learned they are a couple of misplaced Okies. Also heard about Cliff's hunting expedition in the forest when nearby Mount St Helens erupted!


Wayne and I were both sad to leave Shady Firs but the time came to move along and so we did. Next stop will be Tacoma and Seattle.
Email ThisBlogThis!Share to TwitterShare to FacebookShare to Pinterest