It seems as though we've traveled several hundred miles in the past few weeks, but in reality, we've not been far at all... as the crow flies.  We've literally made a circle around the largest part of Puget Sound.  The map below shows what I mean:

We are currently visiting Whidbey Island, the largest of a group of nine small islands. Whidbey lies between the Olympic Peninsula and the I-5 metro corridor of Washington and forms the northern boundary of Puget Sound. Whidbey Island is about 35 miles long -- it's width varies from 1.5 miles to 12 miles.


We're winding up a 10 day stay here at Deception Pass on the north end of Whidbey Island. We were here last year too, but only for a day -- no room in the campground.  We have, without a doubt, enjoyed some of the finest weather in the country during our visit this year. There's been sunshine almost everyday with temperatures  cool enough to require a sweatshirt.


Our campground is only about a mile from Deception Pass, a strait of violent water that separates Whidbey and Fidalgo Islands. Deception Pass connects Skagit Bay in Puget Sound, with the Strait of Juan de Fuca.

Deception Pass is a dramatic seascape where the tidal flow and whirlpools beneath the twin bridges connecting Fidalgo Island to Whidbey Island move quickly. During low tide, the swift current can lead to standing waves, large whirlpools, and roiling eddies. This swift current phenomenon can be viewed from the twin bridges' pedestrian walkways or from the trail leading below the larger south bridge from the parking lot on the Whidbey Island side. Boats can be seen waiting on either side of the pass for the current to stop or change direction before going through. Thrill-seeking kayakers go there during large tide changes to surf the standing waves and brave the class 2 and 3 rapid conditions.

Coupeville is about midway down Whidbey Island.  It's a quaint little town that looks much the same way it did way back in the early 1900's.  We took a day trip there to take a look and eat lunch at Knead To Feed, a little cafe that is only open for breakfast and lunch.  Here's what we ate: 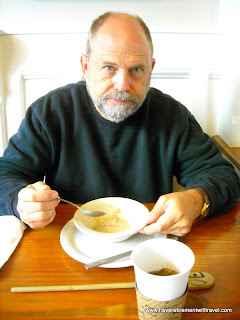 The Wayner enjoyed his chowder too, just not as fast as I enjoyed mine.  Because we arrived late and got the last bit of clam chowder, our bowls were not filled to the brim and as a result... we got a discount.  I'd rather have the whole bowl of chowder than the discount!

Coupeville is located in the heart of Ebey's Landing National Historic Preserve and still reflects the character of a seafaring town of a time long past.
After lunch we strolled the streets, poking our heads into antique shops, bars and nautical junk stores. It didn't take long to find Kapaws IsKreme store where we enjoyed a double scoop.

Another day we traveled north across Deception Pass to Fidalgo Island and the City of Anacortes, a town adored by many but I found to be only mildly interesting.  The best view on Fidalgo Island was from atop Cap Sante on the northern part of the island.
Fidalgo Island was home to Walla Walla State Penitentiary in the early 1900's where prisoners cut rock into gravel and loaded it onto barges to be taken to Seattle. Remains of the prison can still be found but the area is dangerously located on the edge of a steep cliff where many have met their death venturing out too far. 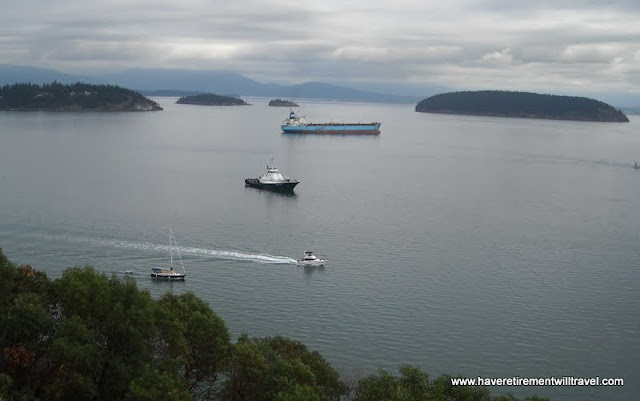 On this afternoon we stopped at a little roadside place on our way back to the campground. It's called Sweet D's Shrimp Shack. It was here we found the best fish and chips yet. 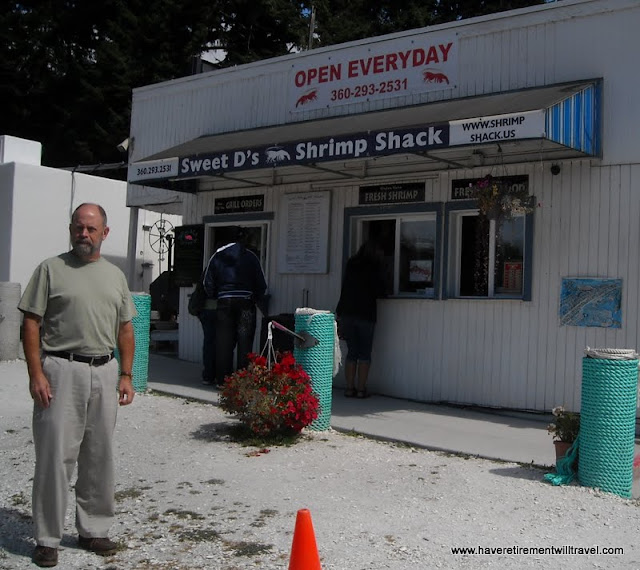 Hope you enjoyed the "eats" with us here on Whidbey and Fidalgo Islands.
Email ThisBlogThis!Share to TwitterShare to FacebookShare to Pinterest