After lunch at Luna Fish House in Yachats, we drove back through Waldport where we saw that the tide had risen a bit and gave us a completely different (and better) view of the Alsea River/Bay Bridge.

The short drive from Waldport to Newport was boring and the big lunch, followed by ice cream took a toll as a dreadful sleepy spell fell upon both of us.

We were happily revived once we came into the Yaquina Bay area. We turned into the Bay Front District and found it brimming with activity and not a parking space to be begged, borrowed or stolen.  The sites and smells were fascinating here. Fisheries and docks of the harbor are balanced by restaurants, shops and old buildings on the other side of the street.  By now the overcast sky had given way to the sunshine even though the temperature was still mild -- low 70's.

The bridge at Yaquina Bay, just south of Newport, is depicted on Newport's promotional signs and material.  It is quite beautiful from every direction. 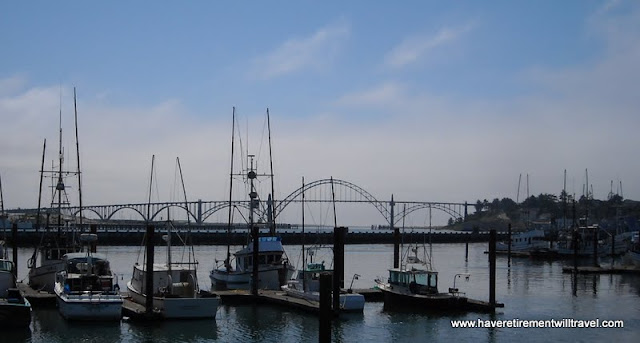 The historical marker near here describes the Yaquina Bay area originally named "Cape Foulweather" in March 1778 by Captain James Cook.  Cook was unable to find any harbor along the Pacific northwest coast because of near constant heavy weather.  News of Captain Cook's voyage stirred interest in this area and is directly responsible for the Louisiana Purchase and ultimately for the dispatch of the Louis and Clark Expedition.

Yaquina Bay Bridge construction began in 1934 as part of the WPA (Works Progress Administration) and was completed in 1936.

It cost a mere $1,301,016 to build and employed 220 men pouring 30,000 cubic yards of concrete and fabricate 3,100 tons of steel.
﻿ The whole area on the west side of Yaquina Bay is another Oregon State Park.  I counted well over a dozen artists / painters / wanna-be's with canvas, brushes, palets and easels perched everywhere.

﻿
Returning to Newport once again along US 101, we made a last stop at Seal Rocks where we did not see any seals but did find the rock formations to be worth a few snapshots.
﻿

Tomorrow morning we'll be leaving Waldport for more points north!  So far Wayne's back is holding up well.  He's being really careful too.
Email ThisBlogThis!Share to TwitterShare to FacebookShare to Pinterest