From Bella Terra of Gulf Shores, Foley, Alabama        David thinks we'll get this horse into the barn by the September 27th contract deadline.  I am too realistic to believe it but too optimistic to dismiss his prediction.  A flurry of activity has begun. From here, I'll just post pictures with dates and brief descriptions.

On Septmber 17th, Rico and Marco began preparing the firepit area for the paver and seating wall.

I met this afternoon with Brandon of Kent's Landscaping to review and modify the original plans we made in June.  Stands to reason, the days I want landscaping service are in conflict with the local "Parade of Homes" landscaping days.  I wanted to shake Brandon by the collar, but thought better of showing my impatience.  After all, I've been waiting only six months.

Pam, Ernie, Joyce and Charlie have moved their arrival up a day and will be here tomorrow, September 20th. Wayne and I are so ready to spend some time with them. I do hope to be near completion, though I don't expect to be on the new site while they are here.  Bill told me that David still feels we will finish on target.

From Bella Terra of Gulf Shores, Foley, Alabama     With Tropical Storm Cindy swiping us in June and then Hurricane Harvey fresh in memory, talk of a new storm system, now named Irma, began last week. Irma is a Category 5 boasting the distinction of being the strongest recorded hurricane in the Atlantic Basin.  She has her eye set on Florida -- all of Florida. Irma's punch for several days was fueled by center winds speeds of 185 mph supported by gusts of 210 mph and some of the lowest pressures at 914 millibars. It is anticipated Irma will slam into Florida, via the Keys and move straight up the peninsula, starting this weekend. Adding insult to injury, a third hurricane, Jose, has now developed along Irma's same path. Jose is expected to take a northward course before reaching Florida's peninsula though. Small consolation.


Through all of the nervousness Irma is causing, Alabama's Gulf coasts appears to be outside her reach -- at least for now.  As a matter of fact, we are having surprisingly pleasant, sunny weather with lower humidity and temperatures. Even the daily rainstorms have stopped.

A welcomed hum of construction activity began on our project this week. It started when the dark brown concrete stain color I chose was not available. On Wednesday, a runner-up stain was selected but it proved to be much too red.


Then the good folks at Sherwin Williams created a custom color that was near perfect and it was applied to the gazebo pad. I do like it. Hopefully, gazebo assembly will begin soon. David and one of his Gulf Coast Construction guys, named Bill, assisted and encouraged me with the process... Bill even drove me to the Sherwin Williams store.

Our non-standard and elusive eight foot double front doors still hadn't arrived and that is holding up interior progress. David managed to get the framing inspection passed without the doors but he's hesitant to press our luck by requesting the insulation inspection without them.

Then, to our surprise, the doors arrived on Sept 7th!  But alas!... No celebration. The sidelights were not included. My heart fell to my feet.  David did go ahead with a request for insulation inspection and to our delight..... IT PASSED -- pending door installation, of course. I'm impressed.

Bill applied the newly custom mixed concrete stain to the gazebo pad Friday, September 8 and it was perfect. My only instruction to Kelley at Sherwin Williams had been to make it as near the original dark brown color as possible.


We are ready for sheetrock inside the casita now and we are waiting for the stone workers to begin work on the outside kitchen.


To our dismay, the perfect color stain developed bubbles by next morning. Bill and David were baffled. An explanation and a remedy from Sherwin Williams would be needed. It would take several days and several applications before Bill determined that whatever was causing the bubbles, it would take a cooling of the concrete before stain was applied to keep it from happening again and again.

Construction stood still September 9 - 11th, which was stressful for me. Our travel friends Pam, Ernie, Joyce and Charlie will visit late in September and I'd really like to have more to show when they are here. 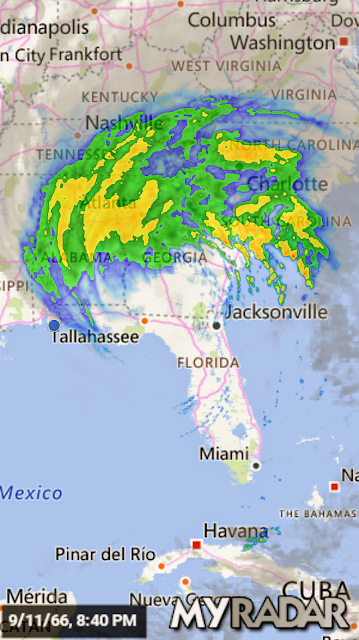 Once again, we've been spared the hardest weather, getting only a few gusts of 25 mph winds and a few showers.  Hurricanes Lee and Maria are being watched in the Atlanatic but they are too far out to worry about at the moment.

The casita porch (notice I use the terms "porch" and "patio" interchangably) is probably my favorite part of our Bella Terra buildout. A mental image of this cozy shady space filled with comfortable chairs, a large dining table, friends at the bar, burgers on the grill and football on the television plays in my mind all the time. There's a chance, this space is starting to take some real shape now.

Murphy's Law would dictate that after waiting all these months to reach this point, Kevin (the outside kitchen guy) would be taking his annual week long vacation. He's gone to San Diego to visit his son stationed there with the Navy. Kevin's associate, David Foshee, will begin the kitchen install, I am told.

I use the terms "kitchen, bar and counter" to describe the same item too. That's just me.

Kevin brought the frame for the outdoor / patio kitchen counter / bar on August 31st -- the day the foam insulation came in a day early.

On Labor Day, David Foshee began the installation. Looking left to right, the counter will have an undercounter refrigerator and sink. The right side will hold a grill and a burner. 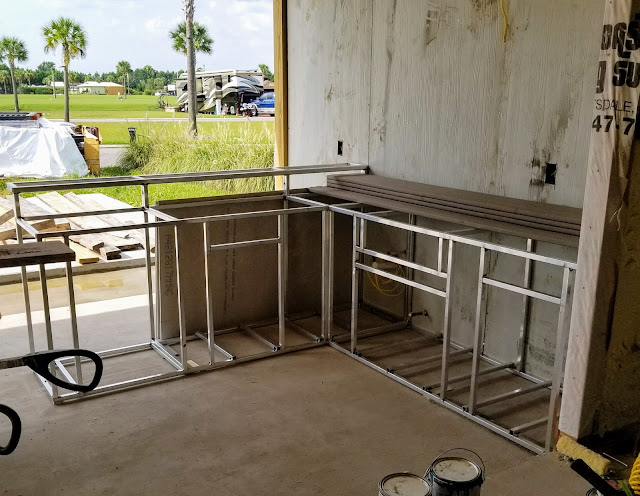 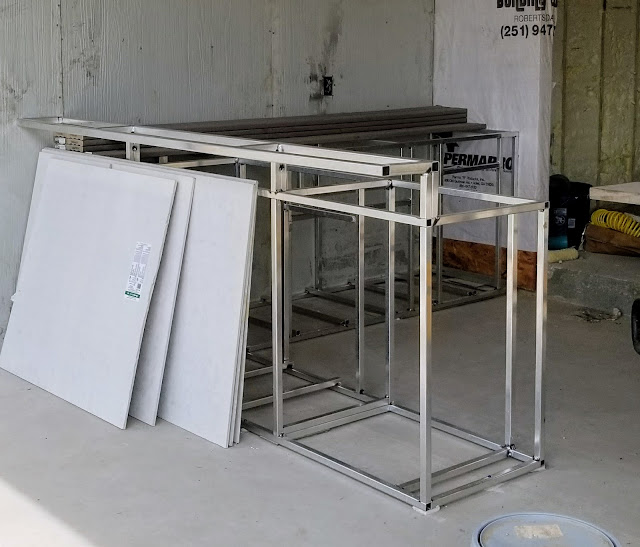 David Foshee completed the Hardi board cover on Tuesday, Sept 6. Stacked stone will cover the entire bar and granite counters will go on last. Easier now to see where the appliances will fit. 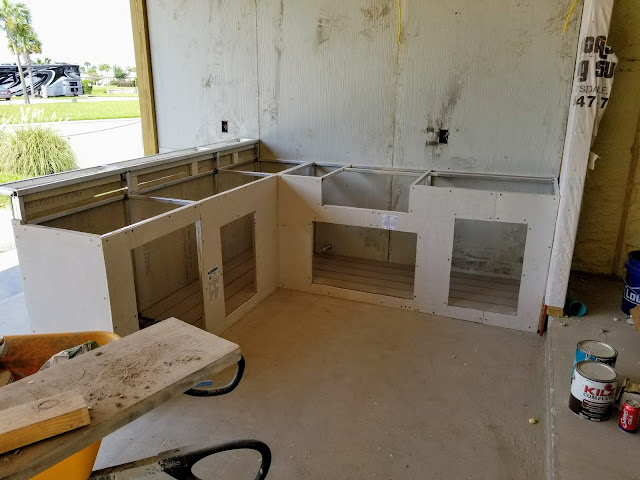 Evidently the illusive painter stopped by sometime during the day as more exterior yellow paint had been applied when I was there mid afternoon. I've never seen him. He seems to stop by, paint for a half hour and dissapear... 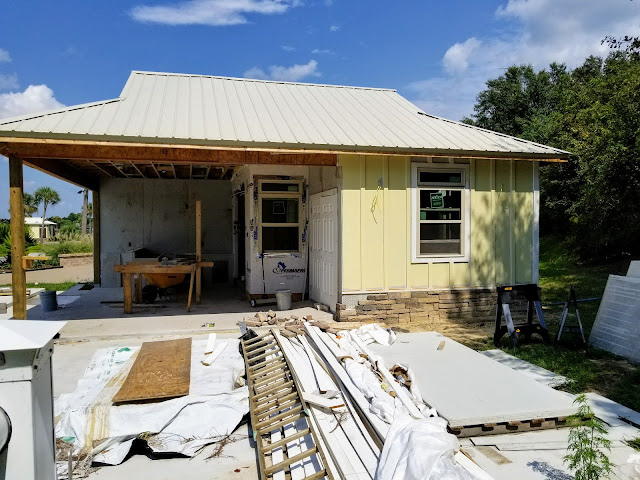 I'm ready for the next steps. September 27th is knocking at the door....
No comments:
Email ThisBlogThis!Share to TwitterShare to FacebookShare to Pinterest

From Bella Terra of Gulf Shores, Foley, Alabama         On Friday, August  22, Category 4 Hurricane Harvey roared ashore near Corpus Christie, Texas. Harvey's torrential rain kept us on edge for almost a week before circling, making two more landfalls, drowning Houston, Beaumont and countless small communities. The week of flooding was, by far, the most newsworthy item 'round these parts and everyone here kept one eye to the sky and the other to a weather app.

During the first half of Hurricane Harvey Week (August 22 -31), weather in Foley was hot and dry and our construction project proceeded at the usual slow pace. Outside stone work continued, painting began and the garage doors were installed.

In his construction progress report of August 29, David said he and Kevin Trussel had met again to finalize the corrective changes to our outside kitchen which they hope can be done at the end of the week. The wall side of the bar is shortened enough to increase seating space and I can stop visualizing friends falling backward, cracking their heads and bleeding crimson onto the concrete patio.

All our inspections to this point have passed -- framing included; pending installation of the large 8' double doors to the casita which we can't seem to get delivered. We talked about aborting the order but decided to work around this delay for now.

David happily announced foam insulation, which normally requires a two week wait, can be squeezed in on Friday or Monday because we are a small job.  Good news like that makes me smile but I also feared we might get pushed back because we are so small.  To my surprise, on Thursday morning, August 31st, the foam installers arrived -- a day early! The installer wears something that resembled a Haz-Mat suit. I wasn't quick enough with the camera to capture him in action. In the blink of an eye, he disappeared into the casita and didn't re-emerge. Hope he's not still in there somewhere, packed into a wall, covered in foam...


Rain subsided by the end of the day and the moment I saw the box truck leave I rushed out to see the result. Looked like a great snowstorm had blown through the little casita.

I suppose sheet rock comes next for inside the casita. Meanwhile, the outdoor kitchen frame installation got pushed away as did completion of the inner side of the porch's privacy wall.

Clearly, I am restless. We've been at Bella Terra since April 7 --  twenty-one weeks. We signed the lot purchase contract April 13 and closed on it April 21st.  We are almost to the end of week nine and slightly over four weeks from the contract completion date of September 27th... But obviously, that ain't happening.
We will see what the shortened next week brings.