The Last of Oregon: Tillamook, Barview and Garibaldi Bay 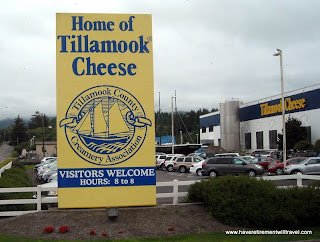 It was near the days end we drove through Tillamook and passed a favorite name brand for dairy products.

Tours are offered at Tillamook Cheese from 8 a.m. until 8 p.m. but 4:30 was too late in the day for even a single ice cream sampling. The dreaded GERD would cause grief for Wayne if he even thought about it.

We agreed to make a return trip to tour the Tillamook Cheese facility if we stay on at tonight's campground for more than just a single night. This day, we only stretched our legs and then drove on.

Today's destination turned out to be the Barview Jetty County Campground located on Garibaldi Bay in Tillamook County.  While the campground location was pretty spectacular, right on the bay, complete with sandy beaches, jetties, access to fishing, a tidal area and trails through the woods nearby -- it was a crowded mess.  There are apparently no restrictions on the number of people, tents, campers or vehicles on a campsite. There were two campers, five tents and dozens of people on the sides either side of us.  It was not a pretty sight.

We stayed one night at Barview Jetty County Campground and did enjoy taking the dogs out onto the beach once again.  Armed with my trusty Nikon Coolpix again, I snapped more pictures. This time, I'll load them as a slide show.  Enjoy, if you love seeing our dogs -- tolerate or skip the slide show all together if you don't.

My morning walk around Barview Jetty County Campground was nice and refreshing as I hiked out pretty far onto the jetty and took this short video.    Click here to see my early morning video of Garibaldi Bay   If you prefer to see just a single photo taken from the jetty, looking back at the campground, it's below....

We got our usual mid-morning start and left Barview behind, continuing the ride north on US 101.  The road continues to provide beautiful scenery and the occasional reminder that we're driving into and out of Tsunami hazard zones. 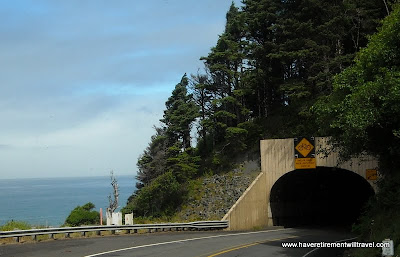 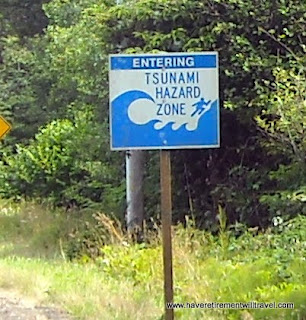 We are headed toward Cannon Beach, a short four-mile stretch of land with a population of fewer than 1700. This is a popular and picturesque area that hosts almost a million visitors each year and has been continuously occupied since the late 1800's.  Captain William Clark (of Lewis and Clark Expedition fame) sailed into this area is 1806 to secure a supply of blubber from a whale beached nearby.

Cannon Beach these days is mostly noted, and visited, for photos of Haystack Rock, a monolith that stands 235 feet over the beach and is among the largest "stacks" along the Pacific shore.  I cannot imagine why, but I do not have a spectacular photograph of Haystack Rock.  I think I was more impressed by Tillamook Rock Lighthouse.


Having spent time last year in the area from Seaside to Astoria, this year we'll take a new route -- traveling eastward from Astoria, along the Columbia River on Oregon 409.

Unfamiliar and oblivious to the enormity of wood production in this area, this year's route was enlightening.  Crossing the Columbia River from Westport, Oregon into Cathlamet, Washington we could see tremendous stacks of logs being readied for processing.  The pictures in the slideshow are of both sides of the bridge. One of the pictures is of steel -- not logs.