Memories of Galloping Gertie, Turner Joy and A Surprise Kitty


The areas of Olympia, Tacoma and Seattle were experiencing a heat wave when we were there --mid-80's each day.

We selected a campground outside the metro area where it seems a bit cooler.

To our surprise, we would get an excellent view of beautiful snow-capped Mount Rainier, some 50 miles away!

I had forgotten that Galloping Gertie was in this area.  You know Galloping Gertie, don't you?  If you've ever seen a documentary film from November 7, 1940 showing the violent twist and subsequent collapse of a really long suspension bridge over Puget Sound, you know Gertie.

It was an early fact that the Tacoma Narrows Bridge swayed in the breeze even before it opened to the public. Several attempts had been made to correct the motion of the bridge but none were successful.  Shortly after construction began in 1938, the deck began to move vertically in heavy winds and construction workers gave the name Galloping Gertie to the undulating bridge.

The 1940 Tacoma Narrows Bridge was a very long suspension bridge spanning the Tacoma Narrows at Puget Sound near the Kitsap Peninsula. It opened to automobile traffic on the first day of July, 1940 only to collapse four months later in 40 mph wind conditions. No human died in the catastrophe but a black cocker spaniel, named Tubby, was left behind in the only car that fell into the water below. Neither the dog's body or the car were ever recovered. The car's driver crawled off the bridge on his hands and knees.

It took almost 10 years for a replacement bridge to be erected across the Tacoma Narrows.  The new bridge uses Galloping Gertie's tower pedestals and cable anchorages.  The collapsed parts to the Gertie were never recovered and now serve the underwater world as an artificial reef.  Later a second bridge would be built alongside the replacement to Galloping Gertie.
﻿﻿﻿
The collapse of Galloping Gertie was recorded and in 1998 was placed on the National Film Registry of the Library of Congress.

The day we drove into Tacoma and then back again, we crossed these bridges and I remembered watching the film. I remembered seeing the black car rocking on the twisting bridge.  I don't like being in high places and I particularly dislike high bridges.  I thought about the little dog that died and the man that didn't.  I'm sure he had many sleepless nights. I'm sure the engineers who designed the original bridge had some sleepless nights too.

The ride across the Tacoma Narrows Bridge was part of the day trip we were making to Puget Sound Naval (PSN) Shipyard at Bremerton. PSN Shipyard is the largest and most diverse shipyard on the West Coast and boasts the northwest's largest naval shore activity. Puget Sound Naval Shipyard was established in 1891 as a naval station. During World War I, the shipyard built new ships including 25 submarine chasers, six submarines, two minesweepers, seven seagoing tugs, and two ammunition ships, as well as 1,700 small boats.  That's some shipyard! 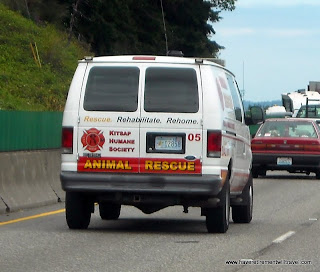 Along the way, we were thrilled to see this Kitsap Animal Rescue van pass along side us.

Animal rescue is dear to my heart.


At Puget Sound Naval Shipyard, we expect to see Turner Joy.  You DO remember Turner Joy, don't you?  The USS Turner Joy was the last ship in the FORREST SHERMAN - class of destroyers. Her keel was laid down on September 30, 1957 in Seattle and she was launched on May 5, 1958 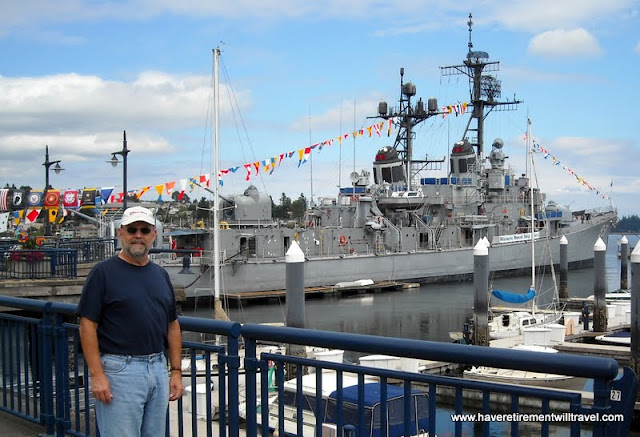 We came to see her today and enjoyed several hours here. Like most veterans, Wayne is growing more nostalgic about his military comrades and the Vietnam conflict as he ages. He is actively working toward getting more of his lost CMA colleagues the recognition they deserve. I'm proud of his effort.
Decommissioned on November 22, 1982, and stricken from the Navy list on February 13, 1990, the Turner Joy was donated to the Bremerton Historic Ships Association on April 10, 1991.    Then we got a bonus:  We were fortunate to get a glimpse of another war hero as we passed the docks:  The USS Kitty Hawk.  While a really good photo was not possible to get, as she could only be seen briefly as we drove by, I caught this fair shot of the ship's stern. Upon return to the campground just before nightfall, I got another picture of beautiful Mount Rainier, this time dressed formally for the evening.  I read somewhere the mountain peak can be seen from as far away as Victoria on a very clear day. 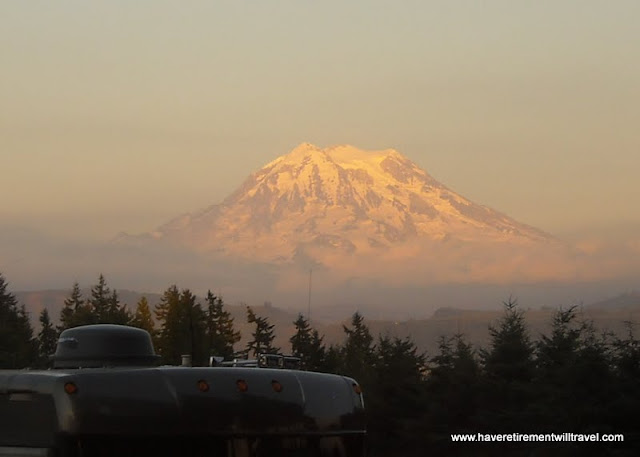