From Tucson Lazydays KOA Campground      Tucson's #1 attraction and one of the top ten museums in America (so says TripAdvisor) is the Arizona-Sonora Desert Museum.  Not your usual museum though... this one is oh so different with 85% of the displays.... outside! Yay! 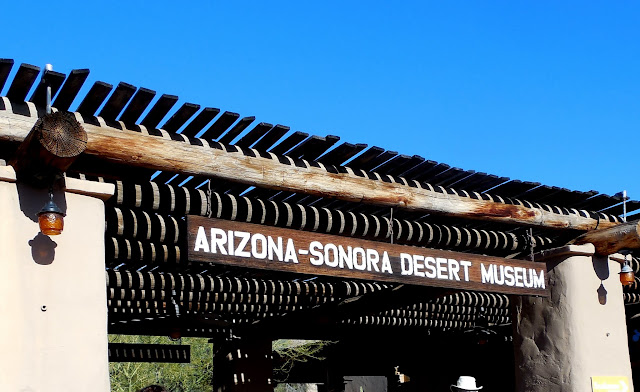 Pan, Ernie, Wayne and I took a 30 minute morning ride to the desert museum today. Included in the price of admission are two raptor shows daily. We arrived just in time for the morning one which was already underway when we reached the raptor free flight location. Several owls and hawks were released to fly over the desert and then return, on cue, to their trainer.

Our free flight raptor viewing location left something to be desired as we were looking directly into the morning sun but I was able to capture one fair picture of this red tailed hawk as it soared overhead. 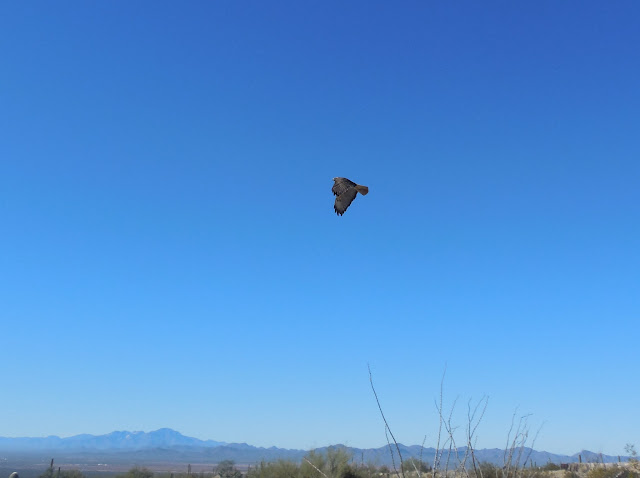 Later in the day, we happened upon one of the bird trainers who had this guy riding on his arm.


The Arizona Sonora Desert Museum first opened it's doors on Labor Day 1952. Visitors arrived via a dirt road which was intentionally unpaved to reinforce the belief of museum founders that guests would be more inclined to "become one" with the desert.

The road to the museum, along with the parking lots, are all asphalt today, thank goodness.


Following a below-freezing night, the morning was downright cold when we reached the museum but the sun was bright and the day warmed quickly. We layered clothes and by 11 o'clock, we were shedding the outer layers. By afternoon, I was down to my sweatshirt. and sweating.

I love the desert and native desert cactus is especially fascinating. These two are my favorite pictures from today's desert visit.


When the raptor free flight program ended we finished the long desert loop trail, passing the javelina, a plant adaptation area and then the coyote ramada where we met these two characters.

I am not a fan of the zoo idea. In any form  -- not even this one. I can't find any justification in holding wild animals captive for the pleasure of people. Seeing these two captive coyotes today reinforced my opinion as one stood motionless for the longest time and the other paced incessantly.

The scenery at the desert museum was the star attraction, in my opinion, and there was plenty of scenery here. Up close and far away. And a sky so blue it didn't even seem real and the beautiful colors of the desert made every view appear postcard perfect. 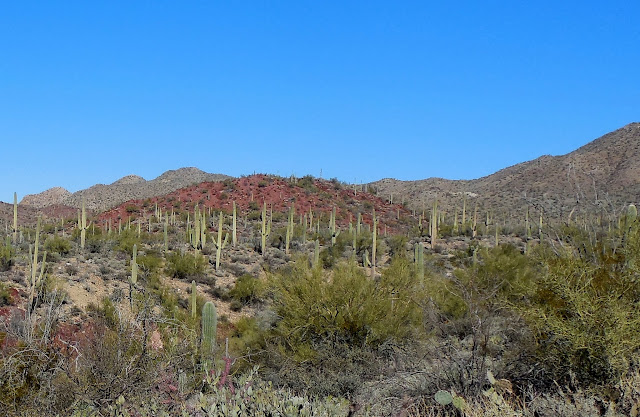 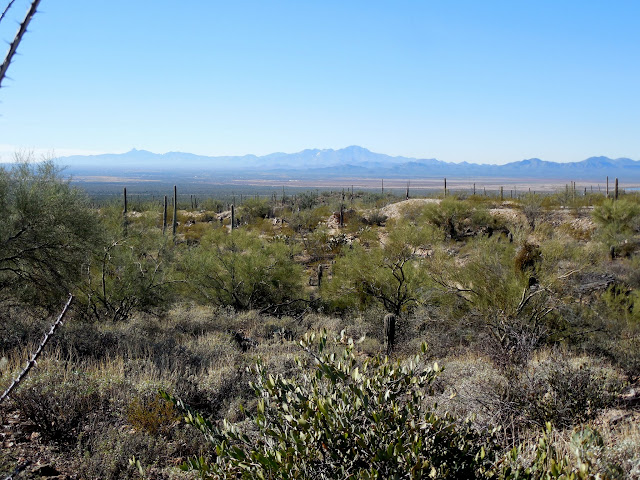 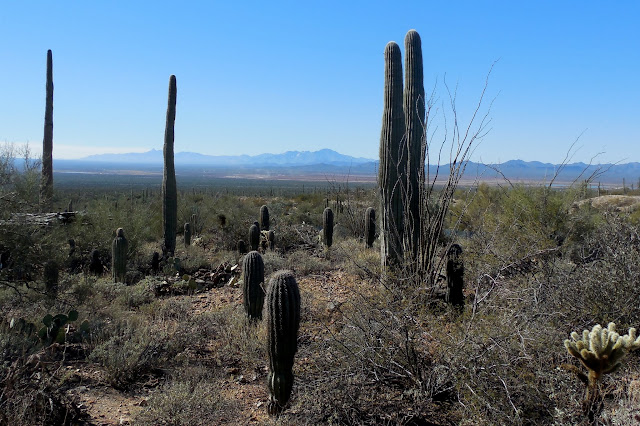 Hours passed as the four of us wandered the desert museum pathways and explored the Arizona landscape. We came upon Cat Canyon and saw these two felines perched high in the artificial rocks enjoying the sun and keeping away from the maddening crowd. 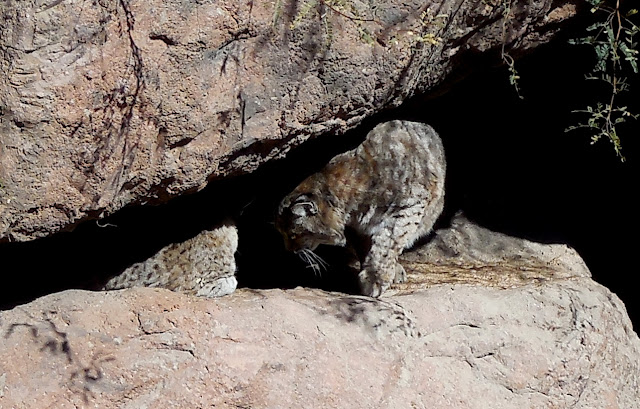 Mid-day, we had prickly pear infused margaritas, ate lunch and rested our "dog tired" feet at the Sonora Desert Museum's Ocotillo Cafe. The chicken tortilla bisque was delicious. As usual, we asked our waitress to photograph us sitting around the table. Naturally, she obliged.


Rejuvenated by lunch and prickly pear margaritas, Pam looked around to find a large gold colored stone on the counter behind her seat in the Ocotillo Cafe. Convinced she'd found "the Arizona mother lode" she tried to snatch the gold rock to take home. Ernie had to restrain her....

Wayne's prickly pear margarita caused him to try sitting on the barrel cactus in the photo below. Can't take these two anywhere!


Not to be outdone, Pam refused to be held back by this tiny "staff only" sign. All the while I searched for more scenic photo locations.

Exhausted, the four of us were ready to leave the desert museum around 3:30 but stopped one for one last photo at this cactus we nicknamed "the brain"..... 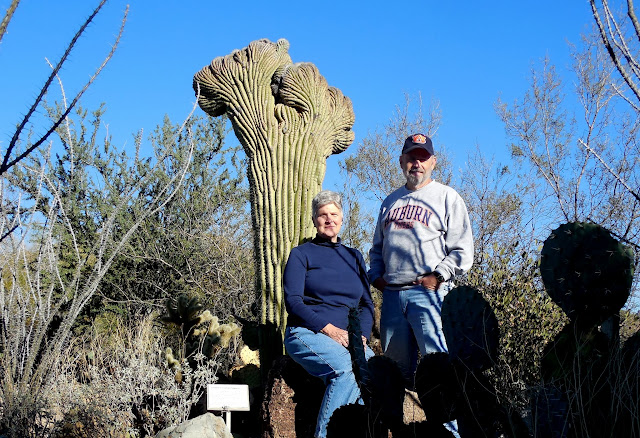