Maverick RV Resort at Lajitas, Terlinqua, Texas            Our travel group is down to four.  Pam, Ernie, Wayne and me. Joyce and Charlie will rejoin us sometime after March next year, but for now, the four of us are headed to the Rio Grande Valley of Texas to see Big Bend National Park and anything else near there that interests us.

The drive from San Antonio to Terlinqua, Texas took two-days. We stopped at Sanderson, Texas to spend the first night. The campground seemed pleasant enough but became memorable for the plummeting temperature that caused the water spigots to freeze. A second, and certainly worse incident, however, was Ernie's fall that injured his ribs and made a whopper of a bruise.

By mid-afternoon the second day we were settling into our campsites at Maverick RV Ranch.  I don't know what Wayne and I did to deserve the "Fortress Campsite" but it's ours for the few days we're here. 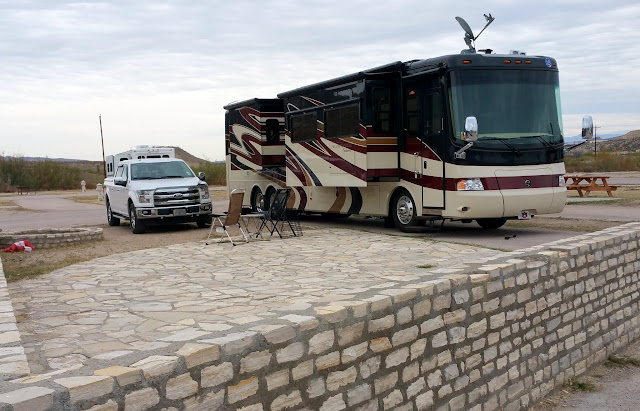 Pam and Ernie's campsite was almost as nice, with a view of the Lajitas mountain we'd see time and time again while we're here.  The picture below shows both campsites. We shared a common patio area... except that ours has a 3' rock wall! 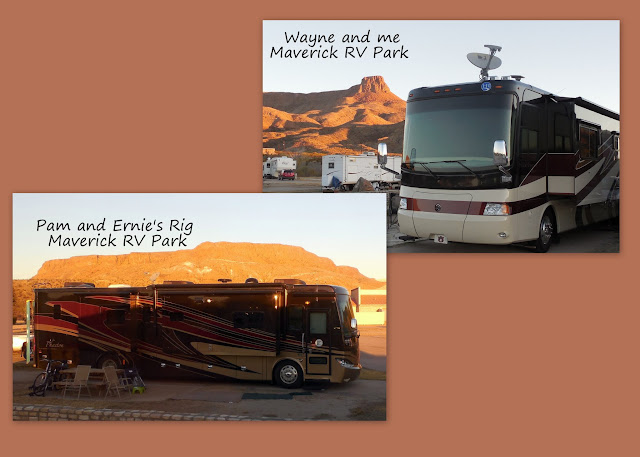 Lajitas is on the western edge of Big Bend National Park at an altitude of 2,200 foot of a bluff overlooking the Rio Grande River. Lajitas is in the northern part of the Chichuahuan Desert and is the very southernmost extreme of the Rocky Mountain range.

Our stay here is short so we planned each day to take full advantage of the time.  The first day would be spent looking around the Lajitas property and then taking a ride down the scenic Camino Del Rio River (TX 170) Road west toward Presidio. 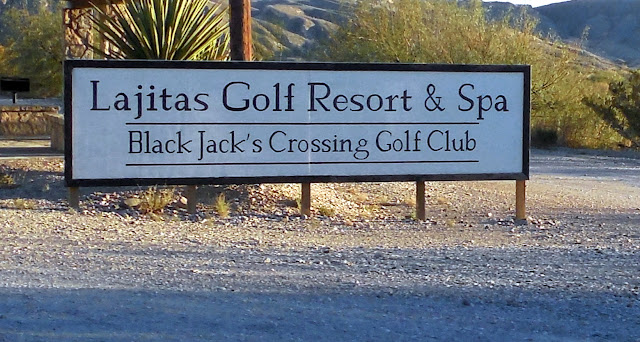 Our first day started with a tour of the Lajitas property, including the golf course, hotel and restaurant areas.

A bit of wild west history:  When mercury "quicksilver" was discovered in the nearby Chisos mountains and cattle ranching gained popular, cross-border commerce brought Lajitas into popularity as travelers could enjoy a saloon stop. Cowboys, miners and regional settlers frequented this area in the 1890's.

By 1900, Lajitas was a substation port of entry and the most important U.S. - Mexico crossing between Del Rio and El Paso, Texas. (This border crossing wasn't closed until after the attacks of 9/11.)

In early 1916, U.S. President Woodrow Wilson sent General "Black Jack" Pershing to this area to capture (dead or alive) Mexican bandit, Pancho Villa after Villa made two bloody raids here. Pershing and a force of 12,000 soldiers scoured the territory and made several close calls, but could not locate Villa.  In a famous telegram, Pershing cabled President Wilson that "Villa is everywhere, but Villa is no where."  In February 1917, President Wilson summoned the soldiers home.

What a thrilling place!


At lunchtime we stopped in at the Lajitas General Store for sandwiches and then started our 50 mile westward drive, in Pam and Ernie's Jeep, toward Presidio. Texas Highway 170 closely follows the Rio Grande and the U.S. Mexico border. Here are the highlights of our ride... 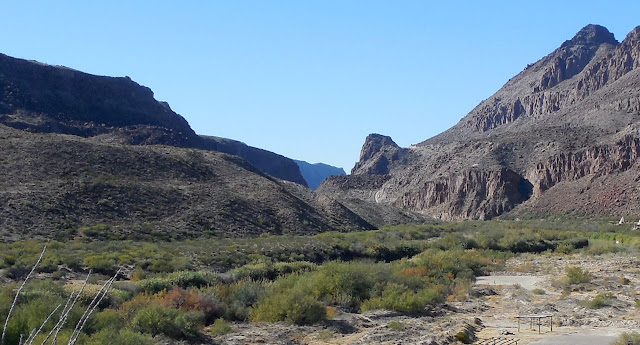 Riding along we spotted a group of animals crossing the road. We knew Javelina were common in these parts. Often mistaken for pigs, Javelina are not a member of the pig family. They are herbivores and frugivores and eat stems of prickly pears, mesquite beans and anything else they find. They have poor eyesight but good noses.  Most people fear Javelina but they are timid creatures except when cornered. They often injure or kill dogs who will fight them for food.

Our presence surely scared this group as they ran quickly off the road and into the brush along the roadside. We tried, with little success, to capture good pictures. These were as good as we could get. To our disbelief, they stopped and turned around when Wayne whistled! 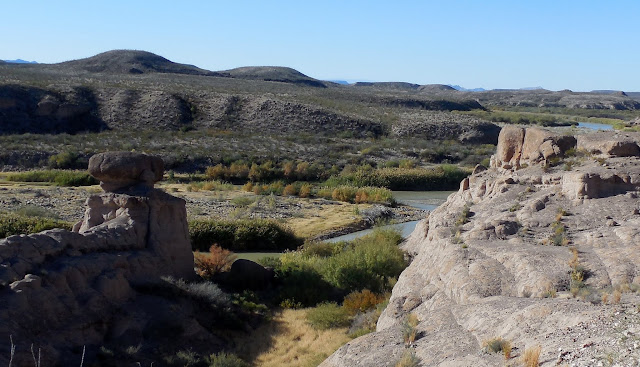 We made it as far as Redford, Texas but turned around about 16 miles outside Presidio -- just after our second animal sighting: two horses and a donkey running down the road. 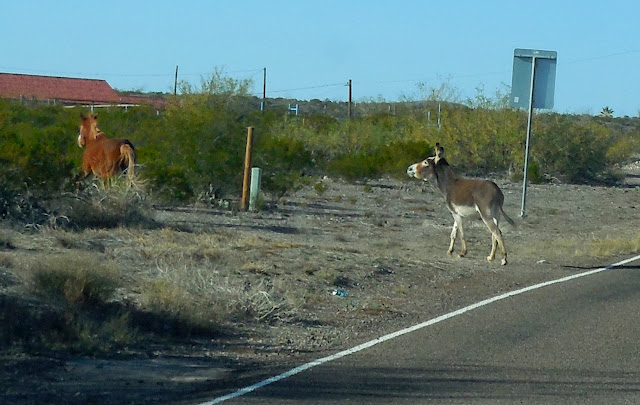 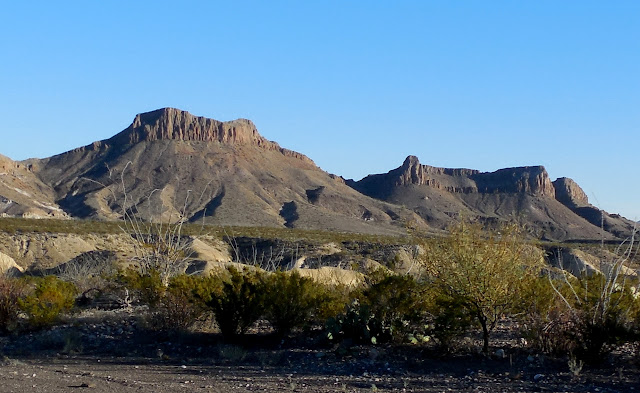 On our way back to Lajitas, we passed the location of a movie set used ten to twelve years ago. Wayne and I had stopped here in our our travel of this area in December 2010 and I wrote a post about it. Sadly, at least two of the movie set buildings have been demolished. We took a couple of pictures of the remaining building. 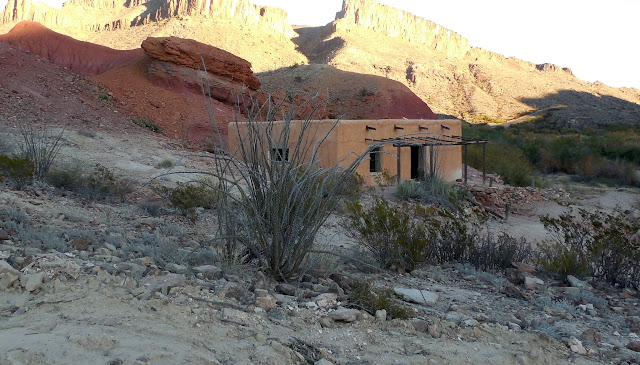 Our next day trip will be to see Big Bend National Park. Hope you'll join us.
Email ThisBlogThis!Share to TwitterShare to FacebookShare to Pinterest