From Maverick RV Park Lajitas, Terlingua, Texas         Mountains, desert, river, wildlife, star gazing, hiking... all are available at Big Bend National Park. Highways end here and we reached the end of U.S. Highway 285. But we didn't stop there... We took Texas Road 118 west to Study-Butte, Terlingua and then Highway 170 to Lajitas. But all that was two days ago. Ernie, Pam, Wayne and I have just three and a half days to see the sights.  Our time is short because we want to be in Tucson for Christmas.

This day, we backtracked through Study Butte, Terlingua and Maverick Junction into Big Bend National Park. Then up to the Castolon / Santa Elena Junction traveling south along Ross Maxwell Scenic Drive. 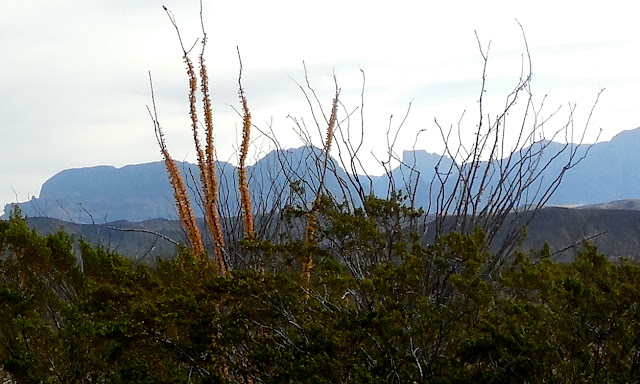 At the site of Sam Nail Ranch, we walked down the path from the roadway -- maybe a quarter mile. A few partial walls of the home remain and the old well still pumps water which attracts wildlife.

As we walked the trail, I began thinking about how warm the sun was on the earth and how nice it must feel to the snakes that live in this area. Snakes scare me and I was caught completely off guard when Ernie tossed a handful of stones into the brush beside me. I screamed -- loud. Ernie burst into laughter that was so hard it made his sore ribs hurt. Full of mischief, that guy is.

Next stop was Homer Wilson Ranch, the largest ranch in the days before this land became a National Park.

Ernie's ribs were starting to hurt a bit getting in and out of the truck so we didn't take the hike down to the ranch remains. I wished we had walked some of the trail because I wanted to pay him back for the scare he'd given me. His aching ribcage was revenge enough though.

The Sotol Vista viewpoint is just south of Homer Wilson Ranch. From here we had an unparalleled vista of the entire western side of Big Bend National Park, including magnificent Santa Elena Canyon in the distance.
Sotol plants loves the southerly sun and is an ancient plant that had a variety of uses for the early people in this region. The heart of the plant was eaten, while the blades were used for making ropes and weaving shoes.

To the southwest of the Chisos Mountains, Mule Ears rise 3,881 feet above the desert floor. There's a nice spring area near the base of Mule Ears, but we didn't take the short, two-mile hike. Instead, Pam and I strolled the parking area, chatted with another tourist and walked the dogs while taking pictures in all directions.

By now, Ernie's painful ribcage has restricted him to the truck and Wayne was happy to keep him company.

Only half of Santa Elena Canyon is in the U.S. The other half is in Mexico. Wayne and I had taken pictures at this overlook when we were here five years ago, but we didn't go closer back then because he was unable to walk due to a bout with sciatica.  Our plan today is to take the short hike through the canyon. 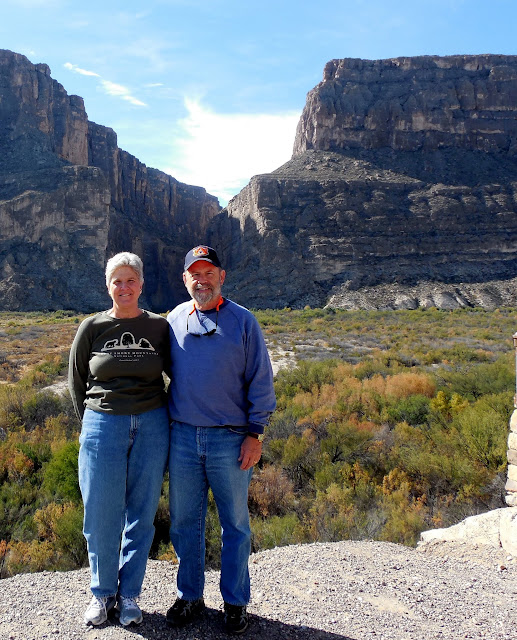 Recent heavy rain throughout Texas and the release of water into the Rio Grande by Mexico has increased the water flow in the river and this, in turn, prohibited us from crossing the river at the ordinarily low water places to take the hike we've come to take. We were disappointed but in all honesty, I'm not sure Ernie's ribs would have fared too well on an uphill climb anyway. 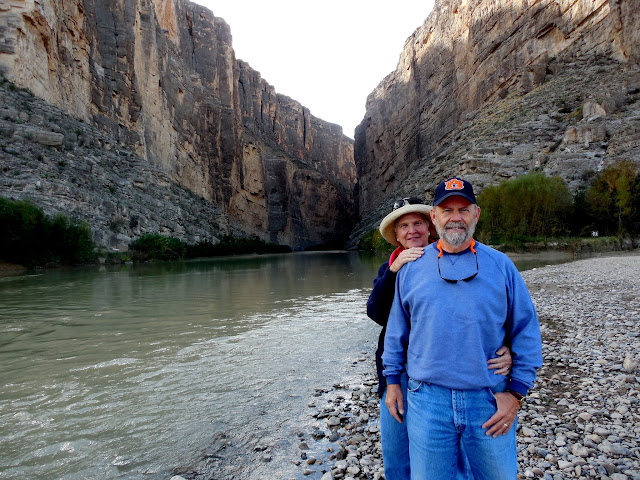 The National Park volunteer in the picture below is Steve. We had crossed paths with him once already today. Again, here at Elena Canyon, we spent some time talking with Steve before he pressed on to his afternoon duties and we returned to the campground.

On our way out of Santa Elena Canyon, we saw this roadrunner and managed to get a photo. Roadrunners are everywhere at Big Bend National Park. They reach speeds of 20 mph pursuing lizards and small rattlesnakes. The roadrunner pecks it's prey to death with stunning blows of its beak.  Yikes! 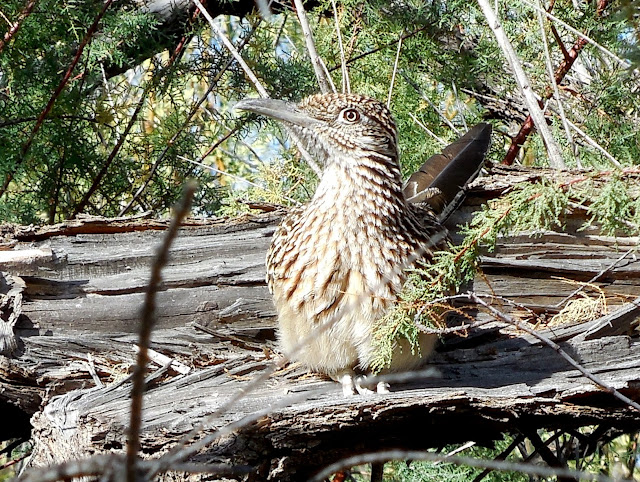 It was near 5 o'clock by the time reached Terlingua on our way back to Maverick Ranch RV Park.  We stopped in at El Dorado Hotel and the High Sierra Bar and Grill for a bite to eat.  Fortunately for us, another group of retiree-types was sitting at one of the tables. Otherwise, I think we would have been afraid of the place. Lots of foul mouth people and unleashed dogs wandered the property. A pen of sheep (or were they goats) were in an adjacent lot. It was a strange experience, but the food was okay. 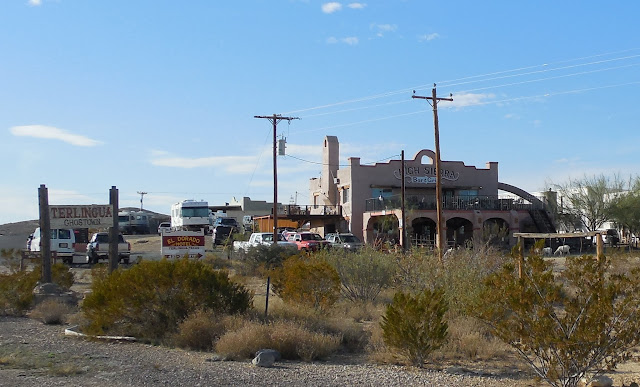 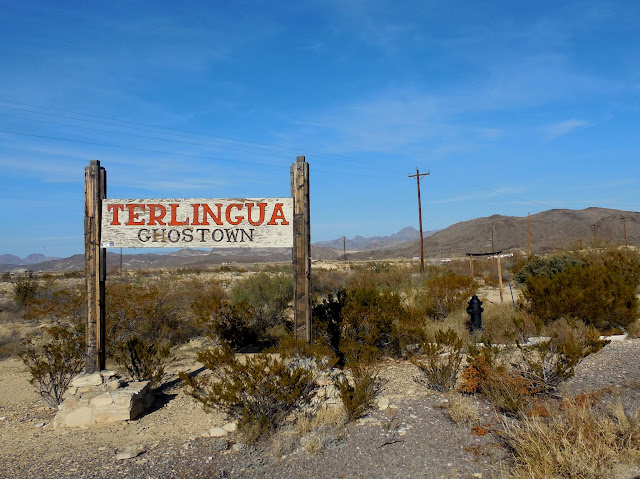