From Betty's RV Park, Abbeville, Louisiana          Pam was suffering with a head cold when we reached Abbeville so she and and Ernie didn't go with Joyce, Charlie, Wayne and me on that first full day in south Louisiana.  The four of us drove south to New Iberia and Avery Island with a plan to see whatever we could squeeze into the day.


First stop... Conrad Rice Mill. It's the oldest rice mill in America. It is also one of the leading tourist attractions in the Bayou Teche area.  Mr. P.A. Conrad founded the Conrad Rice Mill and Planting Company in 1912. He cut rice by hand and let it sun-dry on the Louisiana levees.

After Mr. Conrad's death and the retirement of his sons, the mill was closed. Two years later, the facility was purchased and in 1975 it returned to production. Konrico sells rice and rice mixes to every major wholesaler in the state and to every chain store. They have developed specialty rices sold in all 50 states, Canada and in some European countries

The company store was an enjoyable experience in itself. Every morning a fresh batch of Konrico rice is made for visitors to sample along with a variety of rice flavorings. Joyce and I bought souvenirs and taste tested everything.

Upon our arrival, the lady behind the counter, Myrna, (in the picture above) showed us to a stock room in the back of the store where we watched film that began with the Acadians deportation from Canada, their migration and finally their settlement in this area. The film described the love story of Evangeline and Gabriel and told about the culture of this area and the importance of rice in the diet of Louisianians. After the film, we were escorted into the mill for a first hand look at how Konrico rice is processed to this day.

The original part of the mill was built in 1914 and received additions in 1917 and 1930. It is a rare surviving factory with a belt-drive power transmission, whatever that is. If I heard, I forgot.

.
I was astonished to see the these old machines still used to package the rice we see in grocery stores today.


Next stop: Bon Creole Lunch Counter. This lunch counter was recommended by several as a place to enjoy authentic Louisiana Cajun cuisine. Having lived in Louisiana, Wayne and I know with certainty, that good restaurants are not always what they seem from the outside. The four of us rolled out of the truck and into Bon Creole. Joyce and I ordered the daily special: Shrimp Stew. Wayne and Charlie ordered po-boys. Sadly, our experience at  Bon Creole did not live up to our expectations or the good reviews. Nevertheless, we had a good time and the food wasn't awful -- it just wasn't spectacular. Bummer.


From New Iberia, we took the short ride south to Avery Island where Mr. McIllhenny and his Tabasco plant are located. A tour of the Tabasco packaging facility has been on my bucket list for awhile, though I don't use Tabasco sauce, personally.  We found this sign on the plant door.

Not to be discouraged, we went on into the Tabasco Country Store and watched an informative film about the history of Mr. McIllhenny, his family, the Tabasco recipe and the process. We tested a bunch of Tabasco products including ice cream, which curiously, was good and tasted a bit like butter pecan.

Those who came to Avery Island to tour the Tabasco plant during renovations are given a nice consolation package which includes two large bottles of Tabasco sauce, a fist-full of the tiny sample bottles and two admission vouchers which will NEVER expire.  That's about when we'll get back to Avery Island, I expect.

Avery Island actually sits atop one of five salt domes in this part of Louisiana. It is also home to Jungle Gardens, a property of the McIllhenny family of businesses. A conservationist, Edward "Ned" McIllhenny was born on Avery Island in 1872 and founded Bird City in 1895 as a private bird sanctuary for the once-endangered snowy egret. The birds were hunted into near extinction for their feathers which were used as accessories on women's hats. 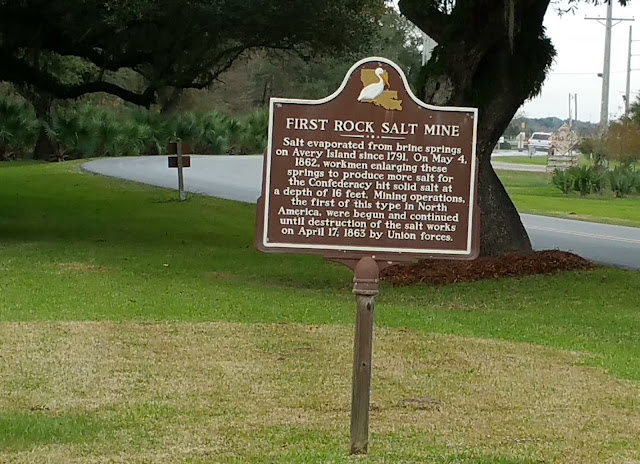 Following the death of his father, Ned McIllhenny took over the McIllhenny Company in 1898 and ran it until his death in the late 1940's. During his spare time, Ned converted the private Avery Island estate into a garden of 170 acres which is the present day Jungle Gardens. Louisiana's mild winters and near tropical summers were perfect for camellias and azaleas. Over the years, thousands of plants were installed among the live oaks. Fifty varieties of juniper and more than 1,000 different iris types were planted too.  In 1935, Ned McIllhenny decided to open his Jungle Gardens to the public


Daylight escaped before we could get to the Joseph Jefferson home and Rip Van Winkle Gardens. We plan a return to the area to see it.....