The Restaurant Critic In Me...

From Tucson Lazydays KOA, Tucson, Arizona       In a recent post, I mentioned a restaurant in Tucson that I wanted to visit while we were there. The restaurant is El Charro Cafe. While there are several locations now, the original El Charro is on Court Avenue near downtown. Wayne and I came up on it quite by accident and I snapped this picture... complete with an unsuspecting and obviously surprised pedestrian sitting on the streetside bench.

El Charro Cafe is the oldest continuously operated (by the same family), Mexican food establishment in America.  The cafe began in 1922 by a woman named Tia Monica who came to Tucson in the 1800's. Her father was a stone-mason commissioned to do the stone work on St. Augustine Cathedral here in Tucson. Other of his work is seen throughout Tucson and the family home, which he built, is now this restaurant.

Pam, Ernie, Wayne and I drove into town for dinner at El Charro around 4:45 in the evening and did not make reservations. On arrival we found, even at this early hour, we could expect a wait of 20 minutes.


We were directed down the sidewalk through a breezeway to an outdoor patio. A tiny indoor bar was crowded and had but a dozen bar stools -- all full. We ordered drinks and went back out to the patio where, to our surprise, the cold temperatures didn't call for any of the numerous outside heaters to be turned on. Overhead warmers were not on and portable propane heaters stood unused in a corner.  Hummm.


Temperatures dropped as we waited for the longest time. For a few minutes two ladies were seated at another table, but they were called for a table and the four of us continued to wait in the cold outdoors. Chips and salsa were ordinarily available for munching during the wait, but tonight, the chips were all gone.


After about 30 minutes waiting on the cold patio, we returned to the small bar area to find a few empty bar stools which we grabbed quickly. We were crowded but a bit warmer except when the door opened.


After a few more minutes in the small bar, the hostess came for us. Alas! Our table is ready! To our dismay, we were taken to a table on the enclosed front porch beside the restaurant's front door. It was warmer than being outside, but not by much.


The El Charro Cafe dinner menu was extensive and impressive but confusing to a southern belle. Finally, with the help of the waitress, we made selections.


I don't remember what Pam or Ernie ordered for dinner at El Charro but I think their food was fried and one or both of them suffered a bit of indigestion later that night.

Terribly disappointed at our El Charro Cafe experience, having been seated on the porch, we all did manage to make our way through several of the interior dining rooms on our way to the restrooms for a few pictures. The rooms I saw were inviting and warm. It made me more angry to see everyone eating without their coats on. 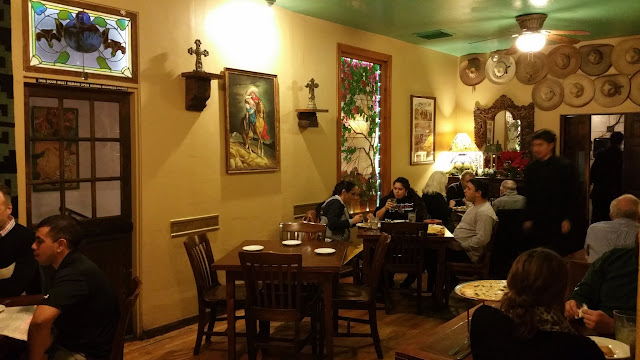 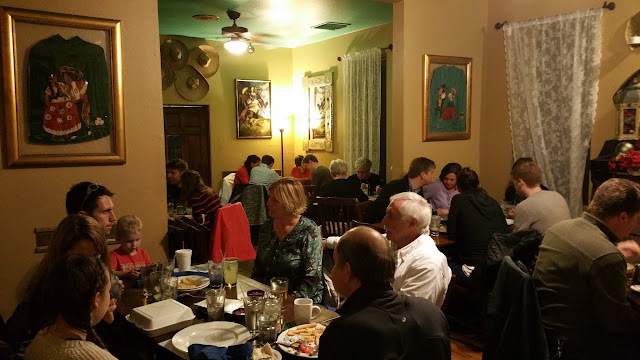 So my El Charro Cafe experience was a disapointment. Not because of the food as it was good, but because I left with a feeling of being cheated out of the historical ambiance which was, to me, as important as the meal itself.  Too bad.