From Betty's RV Park, Abbeville, Louisiana        Early on Saturday morning, December 5th, Charlie, Joyce, Pam, Ernie, Wayne and I took two vehicles and drove to Lafayette for an crash course in accordions. We weren't sure exactly what we were in for but we were expected at Martin's Accordions at 8 a.m. That doesn't seem early to some people but as retirees, we seldom venture out at this hour. Betty had made this recommendation and arranged the time for us. All our faith was in Betty. 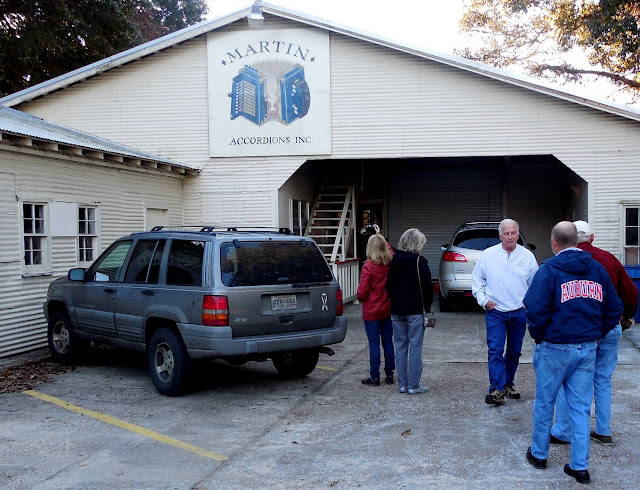 At the designated time, we pulled down a long driveway to the buildings marked with the Martin Accordion sign. We were greeted by a white haired man who introduced himself as "Junior"  and wore a black t-shirt with Martin Accordions across the front. He introduced his daughter, Penny. Friendly folks. Everybody in Louisiana seems friendly -- we're starting to feel like locals.

We had a few minutes to look around the building and my eyes went immediately to one wall which held several dozen beautifully decorated, colorful, small accordions. I wanted to touch them but they were behind glass. There were also about a dozen rows of folding chairs placed in front of a small stage. The only reason I knew it was a stage was because amplifiers were placed on it. No one offered us any hints as to what's about to happen.

Penny told us that a busload of tourists are on their way so we grabbed some front row seats just before the bus emptied. Still not sure what's going on here but at least we're not alone and now we have closeup seats in case it's a good thing. Having experienced Cajun and Zydeco music, my hopes are growing... maybe.


There was no mike test, no "warm up" or lowering of the lights. As if we were in the home of friends, Penny just stood alongside the stage and introduced herself, her father and her nephew, Joel, to the small group. She was well-spoken and it was clear she was knowledgeable about this music. She gave a simple and clear explanation of the musical instrument history used in Cajun and Zydeco music and then history of Martin Accordions. She talked about the relationship of Louisiana's music to country and jazz. I learned later that Penny is a retired school principal. She is certainly a good speaker. I could have listened to her telling the story of music all day.


Penny would talk about a particular instrument and then the three family members played to give us a taste of the differences.  It was just about the best live music I can remember hearing... but I do love Louisiana music anyway.

Our visit to Martin Accordions would become the highlight of my week in the area. I'm betting we've not heard the last of Joel Martin...

The Martin Accordion experience lasted only about an hour but it will be a long time in my memory, I'm sure.
Email ThisBlogThis!Share to TwitterShare to FacebookShare to Pinterest