Into All Travel A Little Rain Must Fall.


All night before and the morning of our departure from Whistle Stop Antique Mall and Campground, the rain poured... and poured... and poured.  Rain had been in the forecast and we prepared, dumping tanks before the rain began.  We both donned rain suits for dog walks and hooking Big Blackie (the car) to Endie (the coach). One last walk for Lexie and Ozzie just before leaving the property because we could use the covered sidewalk alongside the mini-storage area.

And then we were off -- Endie's big windshield wipers whacking back and forth clearing our way.

Our destination is Sevierville, Tennessee where we're scheduled to participate in a rally.  From Franklin, we'll take the Great Smoky Mountains Expressway through the area of Cherokee National Forest, past Sylva and Waynesville, NC before getting on I-40.

The rain was steady as we travel up and down and all around on the Great Smoky Mountains Expressway. Suddenly, on an incline, without warning, the instrument panel illuminated, in red letters: STOP ENGINE.  Oh no! This isn't the "Check Engine" light... this one means business.  Is says STOP ENGINE. That seems pretty straightforward.

And so we did.  There was a place along the roadway with about 10' of shoulder so we pulled off, stopped the engine and pulled out the coach information.

In his normal, unrattled, cool, calm and collected way, Wayne begins pulling together the Roadside Assistance information, pen and paper and begins to make the necessary calls. 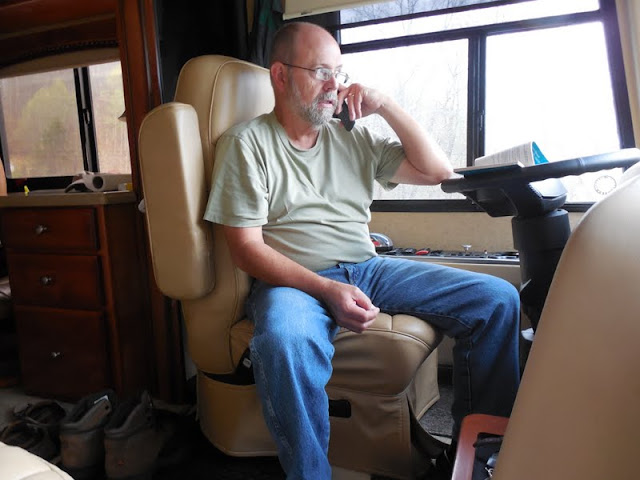 I'm just relieved to have walked the dogs that second time before we left Franklin.

Adding insult to injury, Wayne donned the rain gear once more and unhooked Big Blackie from Endie.  The nice thing about the pouring rain was that it washed away the mud and road grime that was being thrown by the passing trucks.  We knew the day was passing quickly and we were on the side of a mountain in a motorcoach.  At least we had all the comforts of home... even if they were leaning to one side. We ate lunch sitting at the cock-eyed table.

After what seemed like hours, but in reality was just about an hour, this gargantuan wrecker comes rolling up, light flashing.  And when I say "lights".... it had more yellow lights flashing than any fire engine I've ever seen. 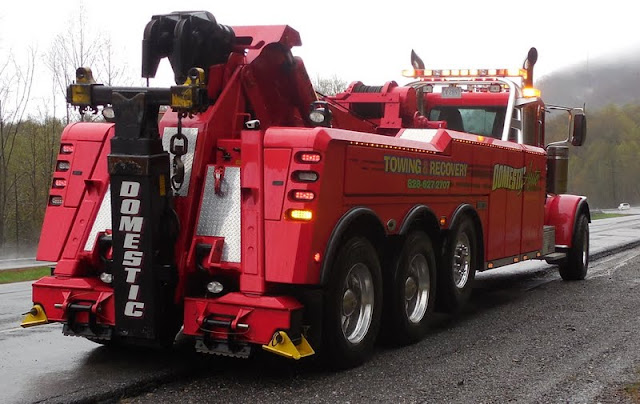 There's a lot of talk about exactly how, where and when to load big Evie onto the wrecker.  Alan, the wrecker truck operator says we'll have to start the engine, get Evie onto the flat roadway, and then hook her up.  Wayne hesitates... sure don't want to do anything to jeopardize that Cummins engine warranty.

More telephone calls... this time one to Cummins to talk about the need to start the engine to get the wrecker hooked up.   We get the okay to do as Alan requests. 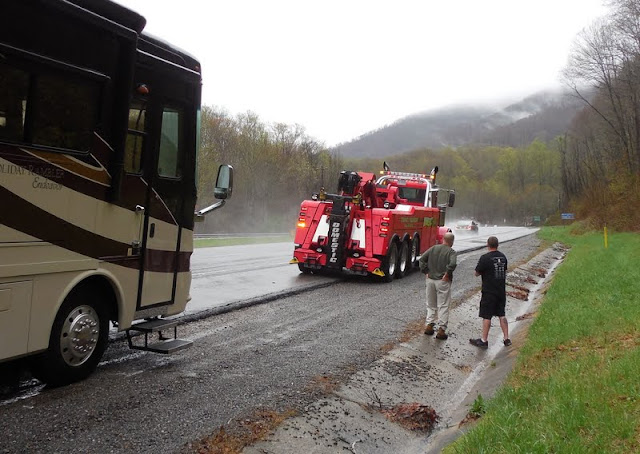 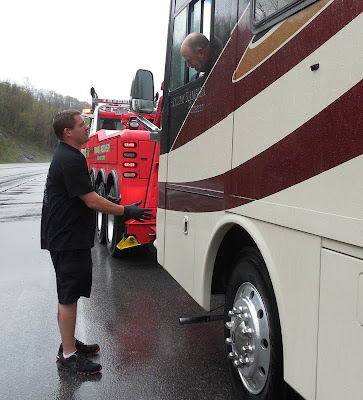 In the end, Wayne held his breath and turned the key.

The "STOP ENGINE" light did not illuminate.

Alan is ready to tow... but is it needed?

If Endie's "STOP ENGINE" doesn't come back on, Wayne can drive her directly to the repair shop.

Did I mention it is in Asheville?  It is.

Did I mention that it's 2 o'clock on Friday and none of the repair shops are open on Saturday?  It is and they are not.

Did I mention that we have a non-refundable reservation at the Sevierville campground?  We do.

We agree to caravan.  Alan will lead, Wayne will follow and I will drive Big Blackie.  If the "STOP ENGINE" lights comes back on, we'll stop and load Endie for towing.  If not, we'll make our way to Ken Wilson Sterling Diesel Truck Service in Canton, NC (not far from Asheville). 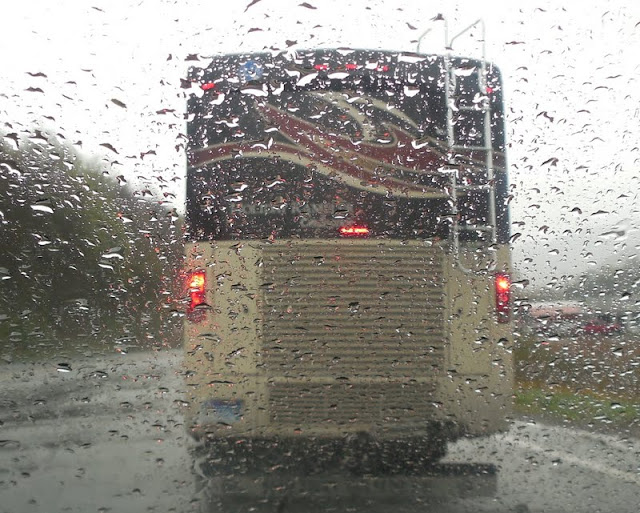 As so, off we go, Alan in the enormous yellow flashing lighted, bright red tow truck.  Endie close behind and me in Big Blackie.  In the pouring rain.  Still.

By 3 p.m. we Endie was in one of the bays at Ken Wilson Sterling Truck Service. By 4 p.m. the problem had been diagnosed by way of the computer port that keeps track of everything that goes on in this behemoth.  Turns out a filter in the crankcase was bad and would have to be replaced. It was not a warranty item.  It would cost $250 or so.  Oddly enough, with so few miles, everyone wondered out loud why this item went bad.  Never did figure it out. But  by 5 p.m. it was replaced and were hooking up Big Blackie  for the ride to Sevierville. The relentless rain continued until we reached the Tennessee state line.

So far the "STOP ENGINE" light has not re-illuminated.

"All's well that ends well" my Mamma would have said.
Email ThisBlogThis!Share to TwitterShare to FacebookShare to Pinterest