Our last day with Ken and Nancy began with Nancy's baked oatmeal. This is the really good stuff she introduced us to on our last day in Fort Myers.  Her recipe is in one of my March posts. She puts raisins and pecans in it and serves it warm with with hot milk poured over the top. Oh my goodness...

After breakfast we visited nearby Boone Hall Plantation and Gardens, just a couple of miles from our KOA Mount Pleasant Campground. The pain of $18 per person admission was quickly forgotten when we saw this...

This view (and the whole place) was almost a religious experience.  The azaleas were blooming and Spanish moss hung from the beautiful Southern live oaks like it had been placed there... almost like icicles on a Christmas tree.

We took a half-dozen photos of each other.  This one of Ken and Nancy is my favorite.  Gee, I take great pictures.... 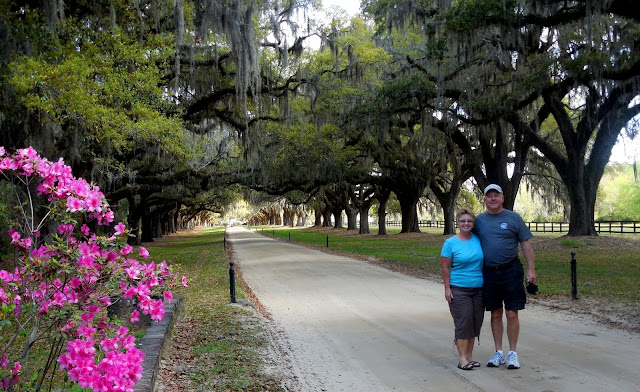 Here's how the Boone Hall Plantation story goes... In 1681, an Englishman, Major John Boone, came to Charleston, began farming here and built a beautiful home. In 1743 (52 years later), his son Captain Thomas Boone, planted these live oak trees, arranging them in two evenly spaced rows.  The spectacular approach to the Boone home would become a symbol of graciousness in Southern homes.

It would take more than 200 years for the trees to meet overhead and form the canopy seen today.

These beautiful Southern Live Oaks were the inspiration for the entry to Tara, the O'Hara plantation described in Margaret Mitchell's book and then on film as Gone With The Wind... according to our tour guide.  (I really thought the trees lined the drive to the Wilkes' Plantation, Twelve Oaks... but that's beside the point.) No Gone With The Wind scenes were shot here, however.  Photos of this entry were used to reproduce the look and an artificial scene was created for the movie (either Tara or Twelve Oaks, remains a question).  Bummer.

Of course, all that serious Boone Hall Plantation history stuff must be balanced with some nonsense, so I generated some... nonsense that is.

Boone Hall Plantation is one of America's oldest working, living plantations. The current owners continuously grow and produce crops... and have been for more than three centuries.  Once known for growing cotton and pecans, Boone Hall now grows a variety of farm-to-table produce.  The price of admission includes a tour of the workings of the plantation.

After a tour of the mansion, we strolled through the gardens and fell in love with the roses and camillas.

The Boone family and descendants of Major John Boone were influential in the history of South Carolina. John Rutledge, son of Sara Boone Rutledge, was governor of South Carolina and a contribution author of the U.S. Constitution. His brother Edward was a signer of the Declaration of Independence.  Furthermore, Boone Hall Plantation produced bricks to build Fort Sumter and many other prominent Charleston landmarks.

The Boone family were also slave owners and nine of the original plantation slave houses remain on the property for visitors to see. Each contains a particular part of slave life.

In a recent post, I mentioned seeing women weaving baskets at Charleston's Market.  Those were Sweetgrass Baskets. They are coiled grass and they are among the oldest African crafts in America. Sweetgrass baskets first appeared in South Carolina during the late 17th century. The very first ones seen in this Lowcountry part of South Carolina were fanner baskets for winnowing rice.

One's ability to create Sweetgrass baskets s viewed as a gift from God. The basket making skill has been handed down from generation to generation and is learned in childhood.

In the 1890's, sweetgrass baskets began to evolve from agricultural implements to household items like the ones in the picture above.

In 1929, with the opening of the Grace Memorial Bridge and the paving of Highway 17 in 1931, Mount Pleasant area basket makers began a long-standing tradition of placing a chair along the roadway and displaying baskets to sell to passersby.

Catching a glimpse of wisteria growing along the edge of Boone Hall Plantation property, I rushed over to get a close-up photo. Within a few seconds I was sitting on the ground with the camera pointed upward.
﻿ 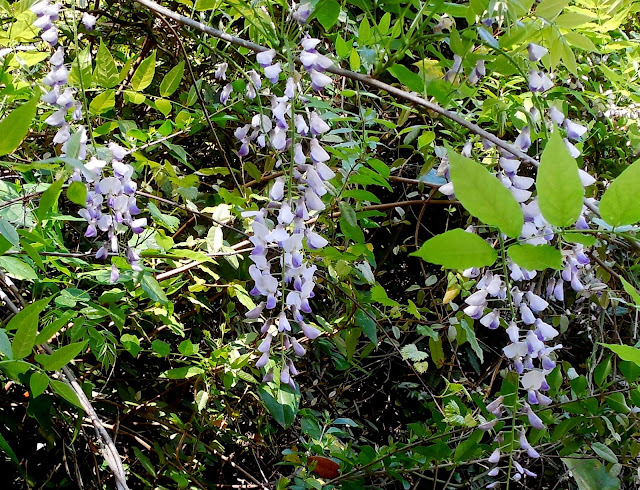 After a relaxing Chic-Fil-A lunch, we returned to the campground, walked the dogs and hopped back into the car for a mad dash to the beach at nearby Isle of Palms.  Nancy found sand dollars here during a visit a few years ago and hopes to find more today.

And so after our South Carolina plantation tour and beach visit, we make our way back to the campground for the evening.  Along the way, stopped to get some good pictures of a few of the Sweetgrass basket stands.

In 1997 an historical marker was erected to commemorate the legacy and history of sweetgrass baskets and their makers. If you're ever in the Charleston, South Carolina area, you really should drive to Mount Pleasant on Highway 17 to see the roadside stands of sweetgrass baskets. 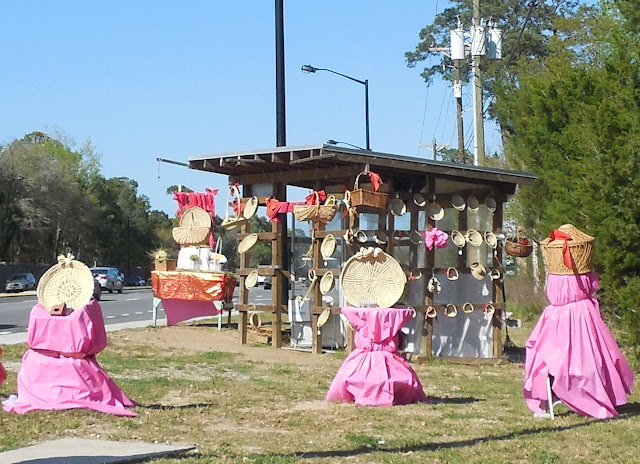 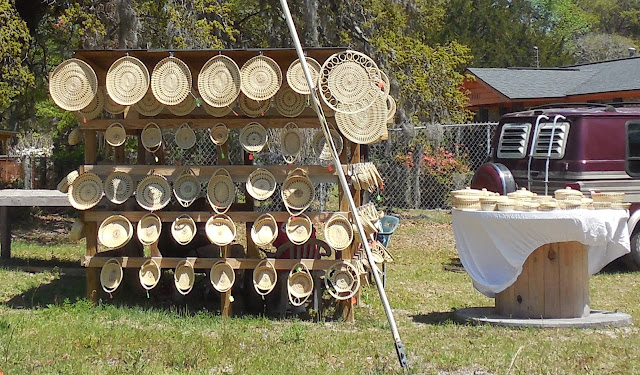 Next morning, Nancy and Ken pulled out of our KOA Mount Pleasant Campground. They're headed to Winston Salem for a week long visit with their grandchildren. 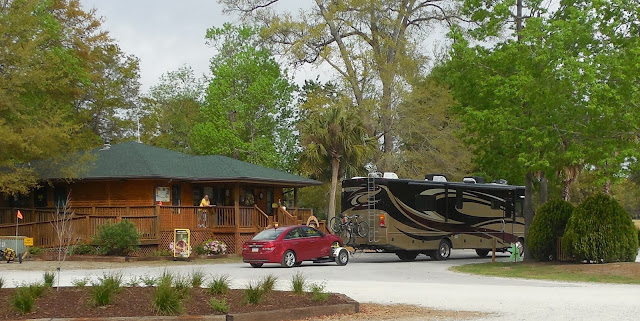 We'll be leaving Charleston tomorrow morning.  Tonight we're expecting some thunderstorms and that is worrisome for poor little Ozzie's sake. We were thinking of driving on up to Myrtle Beach, but during the last day, we decided to go to Columbia instead.  Come along with us, if you'd like.