At the risk of sounding like Ebenezer Scrooge, I will say here and now that I do not enjoy holidays.  I've been this way for a very long time.  Maybe my expectations were just too great as a child. Maybe it's the commercialization of holidays, I don't know.  Wayne says he feels the same way but he's convinced it's not so much that we "Dislike" holidays as much as we "Like" workdays because we take comfort in knowing that payments are being made to Social Security when people go to work. Of course, the Wayner would say something like that.

Whatever the reason, I prefer that holidays pass quickly and without incident. Easter Sunday this year was no different.

Before daylight the sound of rain drops could be heard on the coach roof. I hoped it wouldn't rain all day but took the dogs out early, just in case. Quickly enough, though, the sun came out, the temperature came up and the morning took off beautifully. 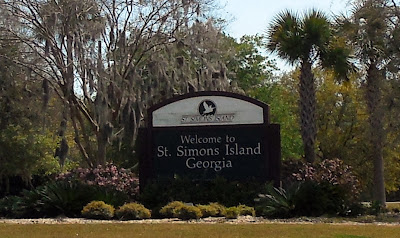 
Around 10 a.m. we decided to take a drive north from our site at Country Oaks Campground in Kingsland, Georgia to St. Simons Island in the Golden Isles area.


As we rode, Wayne told me some of the interesting facts he'd read recently about southeast coastal Georgia.  Not surprisingly this area (Glenn County) is mostly salt water marshes.  That was one of the facts Wayne told me.

About that time, we came upon this very interesting scene: a ship in a field.  No, it's really not in a field, it's a RoRo coming into Colonel's Island Terminal at the Port of Brunswick.  The Brunswick River runs a deep swath through the Glynn County salt marsh.

Wayne continue with my coastal Georgia geography education, telling me that Colonel’s Island Terminal is one of America's largest auto and RoRo facilities.  That's important!  "What," you may ask, "is a RoRo?"

﻿
It seems a huge percentage of the automobiles brought into America come into Colonels' Island Terminal right here in little ole' Brunswick, Georgia.  This is where the cars are Rolled Off.   They were "Rolled On" when they were loaded.  Hence the vessel that carries them is called a RoRo.  Ha. Who knew?

Then in the blink of an eye, we came upon the scenic Sidney Lanier Bridge taking us across South Brunswick River to the Golden Isles and for us particularly today, St. Simons Island.

Sidney Lanier was a Georgia born poet who wrote, Marshes of Glynn, about the salt marshes in around Glynn County. The poem seems to have been written to give solace to Lanie's fellow defeated Southerners. Lanier goes into great detail in the poem, describing the marshes in the poetry and encouraging patience and common decency among men following the Civil War.

That was Wayne's third Georgia coast related fact. The cable stayed Sidney Lanier suspension bridge is Georgia's tallest bridge. It's 7,780 feet long and 486 feet high. Those figures are not among the Wayner's factoids -- I read them them somewhere.

Driving in this area of salt marsh, it's difficult to appreciate just how close the ocean really is.  Seeing all the tall sails reminded me that the great Atlantic is nearby indeed.


As we like to visit National Parks, we've decided to check out Fort Frederica on the northern end of  St Simons Island.  The ride was nice and cool with the windows partially down.

As usual, Lexie and Ozzie are with us, curled into little white circles on the back seat.

To keep this post to a manageable length and to keep my blog readers from falling to sleep with my ramblings, I'll add pictures and descriptions of Fort Frederica and other St Simons and Brunswick sights in the next post.

I hope everyone has enjoyed a peaceful and good Easter. I also hope we didn't forget the religious reason for the day.

Thanks for joining us on our ride.   ﻿﻿﻿
Email ThisBlogThis!Share to TwitterShare to FacebookShare to Pinterest