one of the oldest in the country, is significant enough to be part of a permanent exhibit entitled “Life in Coastal South Carolina c. 1840” at the American History Museum of the Smithsonian Institute in Washington DC.

The City Market is a fabulous place. Nancy, Ken, Wayne and I went there today to browse and possibly buy some of the wares.

that in 1788, a man named Charles Pinckney gave the land where the Market stands to the City of Charleston. Mr. Pinckney included a stipulation with the land gift that required a public market be built and that it remain a public market into perpetuity.

The buildings from Market Hall to the waterfront were built between 1804 and the 1830's.  In the early days, the market housed vendors of meat, vegetables and fish. The spaces rented for $1 to $2 -- the more expensive being spaces that had a marble slab for fish or meat.
﻿

In the earliest days of Charleston's Market, butchers threw scraps of meat into the streets. After a time, so many buzzards frequented the area, they were given the nickname "Charleston Eagles".


And so, we finished our tour of the Market with only one purchase: Ken bought a Charleston T-Shirt. Nancy and I intended to buy (1) dry flower art, (2) a battery operated acupuncture apparatus, (3) magnet bracelet, (4) cotton tablecloth, and (5) a piece of silver jewelry. We never did. We are stingy.

At one end of Charleston Market, this beautiful old building stands behind the ornate wrought-iron stair rail. It is a Confederate Museum. It houses memorabilia of the Civil War and is owned and operated by the United Daughters of the Confederacy.  Because our time was so limited, we didn't go in but it's one more thing we'll see when we return to Charleston... and we will return.


At the base of the steps to the Confederate Museum (and many other places in the Market) women sat quietly weaving baskets.  More about that in the next post.

Unable to find any real trouble to get four old people into, we stopped in at a downtown Five and Dime just to roam the store, laugh at the goods and take pictures.  Of course, we bought nothing, but played with all the toys.

And Then To Lunch


We ate at Bubba Gump Shrimp Co.  The bench where Ken and Nancy are seated bears a plaque that states, "I'm Forrest, Forrest Gump.  People call me Forrest Gump".  It's a statement by Forrest Gump 1994 -- says so right there on the plaque. 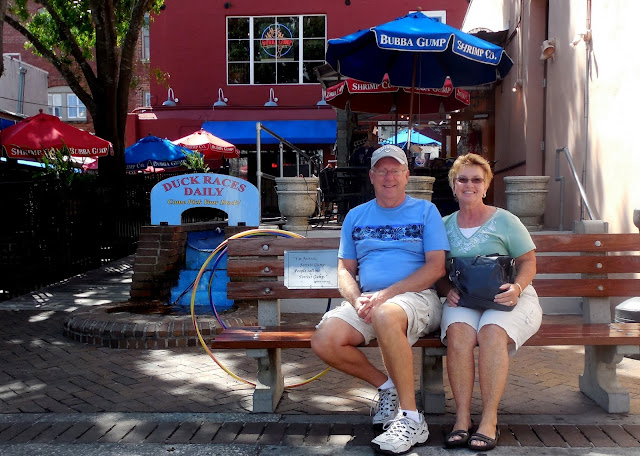 Ken and Wayne had shrimp poboys, Nancy ordered a salad of some kind and I had a very good bowl of She Crab Bisque.  We ate light because we're saving room for "you know what"... 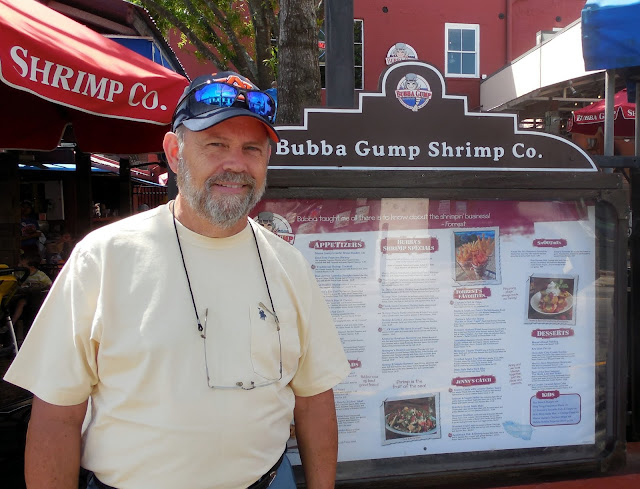 And then there was a candy store -- with ice cream!   The four of us, especially as a group, cannot pass ice cream.  This little corner store had some kind of wonderful concoction... I think it was actually Italian Ice. Whatever it was, it could only be described as delicious!

It would have been a wise move for us to take a long walk after eating lunch and ice cream.  But no, we drove the car the 4-6 blocks down to the waterway, where we parked the car and stepped across the street to take a few pictures of ourselves with nice houses in the background.

Nap time was drawing near so we retreated to the campground.  But late in the afternoon we left again to play putt-putt. I think it's politically correct these days to call this game "Miniature Golf" but to me it's still putt-putt.  Once again, Nancy won with the low score.  Wayne's game improved since our outing in Fort Myers -- he came in second.  Ken had a bad night and I, of course, had the highest score.  At least I'm a good sport about my poor play.  Next time, I'll beat their brains out though!