Goin' To The Lowcountry

And on the sixteenth day, we left our comfortable campsite at peaceful little Country Oaks Campground in Kingsland, Georgia.  It was such a pleasant place we promised ourselves and the managers we'd return for another visit.  At the office, I bought one last half-dozen brown country eggs that I'll share with friends next week and I might share some of our delicious Wainwright's Sausage with them too.  We'll see.....

Because rain was forecast ,we stowed the outdoor chairs, the dogs' playpen and all but one of the outside doormats yesterday.  That was a good idea because the rumble of distant thunder could be heard at 5 a.m. and by 6 the first of several storms moved into the area.

Before the rain even started, Ozzie jumped onto the bed and began trembling. Little Lexie, who is afraid of everything and everybody, continued to sleep soundly in her bed. She knows no fear of weather.  However, one of my hats hanging on the bedroom wall caused her to bark wildly two nights ago... Never know what's going on in that little white head.  Anyway, we put Ozzie's new Thundershirt on but it didn't seem to help.  He shook until the storm stopped.

Rain showers, but luckily no more thunderstorms, were persistent all morning while we got the rig ready to roll.  Lexie and Ozzie were both successful in getting their outside chores done between showers.  The last outside rugs were drenched, however, and we ended up having to stow them in plastic bags.

We drove north on I-95 along with about a million other people in motorhomes, towing campers, fifth-wheels and cars filled to the brims -- all leaving the warm Florida winter. Several times traffic snarled and came to a complete standstill for no apparent reason. We passed a few spinouts too. I-95 needs a makeover real bad.

The temperature fell all morning and finally stopped at 51 degrees. I wondered why in the world we were all going north.  At our lunch stop we turned the heater on for awhile. The rainy, breezy day made us feel chilled to the bone.

Finally we reached our exit and began the last 50-something mile drive eastward to Charleston. Simultaneously, the temperatures began climbing and some breaks in the clouds gave way to sunshine every now and then. The outside temperature got to 58 at last check but the sun remained fickle finally giving in to clouds at the end of the day.

Lavender colored wisteria clumps hanging from trees and long stretches of bright red clover adorned the roadside.  I think I saw some white dogwood blossoms in a few places too.  There were no forsythia in bright yellow blooms or little yellow daffodils I usually see first in spring in the south. Maybe they don't grow here...

We're still in the lands of great live oak draped in Spanish moss and tall pine trees with just a tuft of green on top. Some of the live oak branches were lush with resurrection fern still green from recent rain. We passed bands of red sage and rows of azalea bushes in bloom too. 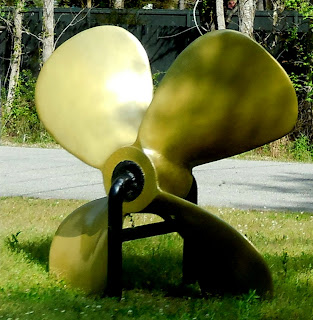 We passed two Carolina Cider and Pie stores and were tempted to stop but didn't as the road's shoulder didn't look inviting enough for our huge rig.

I also noticed several small stands advertising "boiled peanuts".  As much as I love peanuts, I do not eat them boiled.  At least not yet.  I'm liable to try some this week though.

We're going into Carolina Low country -- a name that can mean either a geographic or a social identifier for a part of South Carolina that includes the four southern-most counties  bordered on the east by the Atlantic Ocean and on the west by the Savannah River and the state of Georgia.

The Carolina Low country is famous for resort communities including Hilton Head Island.  For me, the interest is the area's natural beauty and the history of this place. The beaches, streams, marshes, wetlands, plantations and the history of the area are fascinating to me.

We pressed on and I snapped a few more pictures of stuff I deemed "photo-worthy" and that can be almost anything, depending on my mood for the day.

The last stretch of road to James Island County Park was narrow and difficult for driving the rig but the scenery was nice.  Most of my photos are through the windshield or from hanging one arm out the window of the coach. I always remove the screen so I can throw the window open quickly.

Upon arrival at James Island County Park Campground we checked in and paid for our six night stay.  Unfortunately, we must change campsites three times during our stay. Oh no, this is bad. But we'll make it work.

We made our way to our first of the three campsites. In route we dodged a half-dozen pop-up campers being pulled by parents driving vans full of squealing children.  Uh oh. Around the first turn we were met head on by racing bicycles being ridden by red faced kids, exhausted from fast peddling and now nearly smashed into the front of the coach.  Oh my... it's getting scary.  I heard only "Follow me -- I know a shortcut!" from one of the boys.

At the campsite, Wayne positioned the coach for backing and I stood deep in the site to guide him into position. Another pop-up, this one towed by a pick-up truck, was stopped and the driver anxiously waited for his path be cleared.  A big load of firewood was in the bed of the truck. These people were on a mission. The only thing going faster than the racing bikes on the campground roadways were the vehicles.  We're in trouble.

Our campsite is muddy from this morning's rain.  There is no grass on the site. Wayne backed the rig into the site. We surveyed the situation and noted that we're parked "off center".  If we correct our position, and if it rains again, we'll step out of the coach into a mud hole.  We leave the coach parked cockeyed. The site was level and so we didn't use the jacks.

Walking Lexie and Ozzie was thrilling... for us, not for Lexie and Ozzie. We devised a game of picking them up just before something whizzed by. There were skateboards, bicycles, razors, roller skates, motorized toddler vehicles and those hard molded plastic things that are pushed with a handle.  The clacking sound of training wheels seemed especially loud. In minutes we realized we were carrying the dogs more than they were walking.

I walked to the office and asked about the refund policy.  The clerk gave me a warm, apologetic smile when I told her that we felt we were just here at the wrong time.  She assured me that if I thought today was bad, it would only be worse tomorrow and worse still on Sunday.

Our payment was refunded, less the fee for tonight and we'll pull out tomorrow morning. I was relieved and thrilled.

Leaving the office on the sidewalk going back to the campground, flailing arms swung wildly by me as a girl on roller blades came past. She was on a wing and a prayer. Good thing she has on a helmet and knee pads.

Our next decision is what to do about our planned Charleston rendezvous with Ken and Nancy....
Email ThisBlogThis!Share to TwitterShare to FacebookShare to Pinterest