Nothin' Could Be Finer Than To Be In Carolina

We're at the KOA campground in Mount Pleasant, South Carolina. That's just across Charleston Harbor from James Island. Last Saturday, we managed to secure what seemed to be the only  campsite in the county.

But Sunday afternoon most of the campers (and runners) were nearly all gone and there were plenty camping spaces available.  Being easy-going folks, Ken and Nancy canceled their reservation at James Island Campground and joined us here at the KOA. While we didn't want to foul their plan at James Island, we were thrilled to have them join us.


Because eating is such an important part of socializing for the West Side Trailerhood (and this is a small part of that fine group), we immediately made a plan to eat dinner tonight at nearby Carrabbas.

With only three days to spend together, we had to carefully choose our Charleston sightseeing activities. The first day we'd take the boat ride out into Charleston Harbor to see where the Civil War began: Fort Sumter.


We didn't tour the Yorktown today because our time is so limited. We added it to our list of the many nice things to see and do in and around this area.  Nancy and I agree we must return to Charleston for more than just a few days.
Aboard the vessel that would take us to Ft Sumter, we got some terrific views, including other  Navy vessels, the marina near Patriots Point and Fort Moultrie.  The Charleston skyline was pretty nice too.

Fort Sumter History (In A Nutshell)

South Carolina seceded from the Union, yet Union forces still occupied Fort Sumter at the entrance of Charleston Harbor. The South demanded Fort Sumter be vacated but the North refused. Finally, on April 12, 1861, South Carolina Confederate troops fired on the fort -- the start of a two day bombardment that resulted in the surrender of Fort Sumter by the Union.
With the North's withdrawal, the South held Fort Sumter until it was finally evacuated on February 17, 1865. During that time, the fort experienced one of the longest sieges in modern warfare. For almost two years, 46,000 shells were fired at Fort Sumter. For those reason and more, Fort Sumter remains one of the most significant historic monuments in the United States.
Our visit to Fort Sumter lasted a total of two hours:  1/2 hour each way on the boat and one hour to tour Fort Sumter itself.  Today's weather was what I consider perfect -- low 70's with a full compliment of sunshine.  We strolled the grounds, listed to the National Park Ranger talks and looked through the museum. It was a fine day for a history lesson. 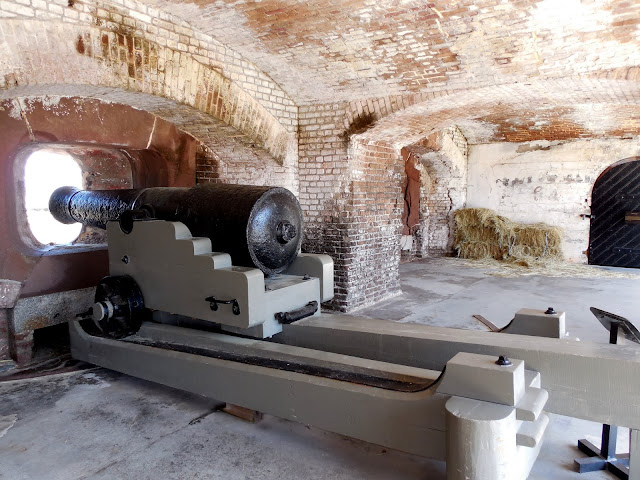 About That South Carolina Flag...

Since we've been here I've been asking around about the design of South Carolina's state flag:  A crescent moon and a palm tree on a solid blue background. What's that all about?  Today, I learned about it. 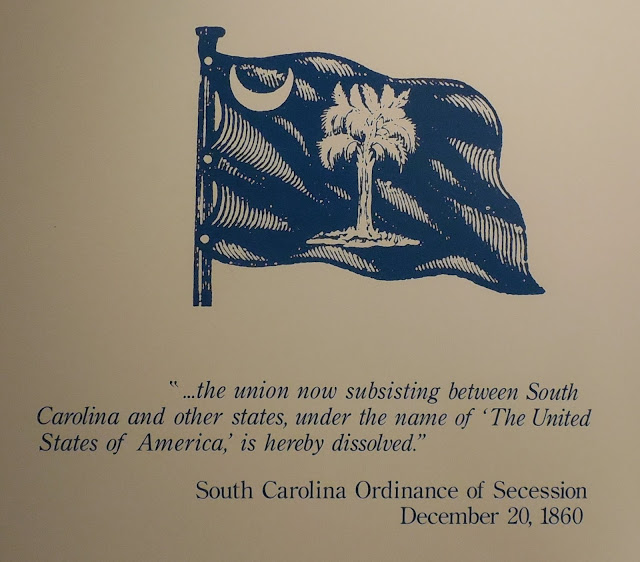 Returning to Patriots Point, of course we spent lots of time and no money in the gift shop.  This is where I first saw a Poo-Pourri display.  Yes, it is what you think it is.  Janie told me about it, but I was seeing it for sale here for the first time.


With our tourist duties officially concluded for the day, it would be important to get in a nap, so Ken does just that.


We're headed out to a "unique little restaurant" called See Wee. It's a suggested restaurant by the campground.  We'll give it our taste test later this afternoon.
Email ThisBlogThis!Share to TwitterShare to FacebookShare to Pinterest