Clemson: Some Other Tigers

The tiger is the most prevalent of all college mascot animal choices.  I know this to be a fact because it was a trivia question on ESPN last year -- and I knew the correct answer.

Wayne and I are Auburn Tigers. (Wayne would say Auburn Tigers are the real Tigers.) His parents met on the Auburn Campus in the mid 1940's and Wayne is a 1972 graduate. Auburn's tiger mascot is Aubie.

Because we lived for a time in Baton Rouge, we're quite familiar with the LSU Tigers too, who's tiger mascot is Mike.

We had a brief visit at Clemson University this week while we camped a couple of nights in Piedmont. A stop at this South Carolina historical marker gave us a good overview of the important history of Clemson University. 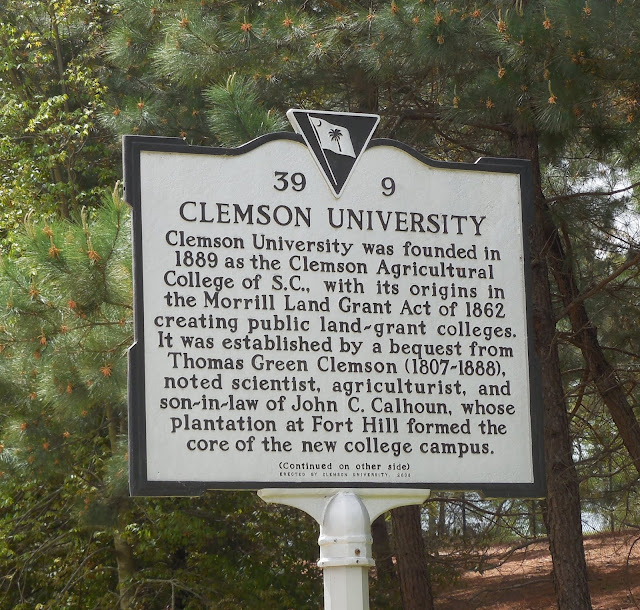 1955 - The military system of discipline was dropped; Clemson’s first women enrolled as full-time, degree-seeking students. (The first degree granted to a woman, Margaret Marie Snider, was in 1957.)

1970 - The Tiger Paw was adopted as Clemson’s athletics symbol.

We rode around the campus, which was impressive and rich with school spirit.  Lots of orange and purple. The weather was cooperative too.

Wayne says there are lots of similarities in Auburn and Clemson, not the least of which is that both universities bear the name of their city: Auburn, Alabama and Clemson, South Carolina.  Each also has a red brick clock tower that is significant to the school's history.
Both are land grant universities and both employed John Heisman as football coach.  There's probably some more stuff but I hesitate to ask Wayne or he'll get on one of those college trivia tears where I get more than I really want...


It's been awhile since I posted a picture of the furkids and this seemed like a good one to share.  Little Lexie is standing with her front paws on the door handle. Her pink tounge sticks out because she has no upper front teeth. Ozzie is sitting on the console between the seats. He's a real "Momma's Boy" and watched every step I took while out of the car.

Hope you enjoyed this Clemson University visit with us.
Email ThisBlogThis!Share to TwitterShare to FacebookShare to Pinterest