Visits To Sevierville, Pigeon Forge, Gatlinburg and The Smoky Mountains

My family often came to the Great Smoky Mountains when I was a child. As an adult I remember spending Christmas in Gatlinburg when nothing was open for days before and after the holiday. The area was rather sleepy back then.  Times have changed.

The corridor through Sevierville, Pigeon Forge and Gatlinburg is a giant strip of tourist attractions.  Restaurants, souvenir stores, mini-golf, outlet malls, dinner shows, bungee jumps, go-karts, ice cream stands, more mini-golf, more bungee jumps, go-karts and so on. From Thursday afternoon until Sunday night, traffic is snarled for miles and miles along the highway. This is not our cup of tea.

We arrived in Sevierville exactly one week before the annual Online Campers Rally. This will be our first RV rally.  Rain poured the day of our arrival and the water stood in the campground for several days after.

For a week we relaxed around the campground, cleaned out the coach's basement and received our mail.  We also took in a visit to the nearby Dandridge, Tennessee manufacturing plant of the Bush's Bean Company.  The day of this drive we enjoyed bright blue sunny skies and cool temperatures.


Another day that week, Wayne took a ride into Knoxville to visit the University of Tennessee campus. He wanted to get a few pictures of the haunts from his time as a student there in the 1960's.

Mid-week, when the traffic was a bit less, we took a ride into Smoky Mountains National Park to visit the Appalachian community of Elkmont in the upper Little River Valley. 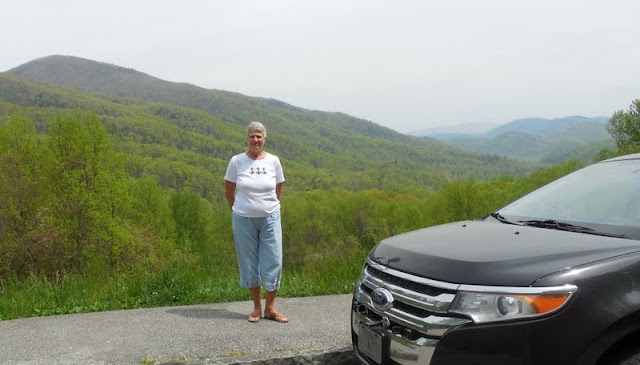 About four years ago, during a trip here, we stopped in at the Ranger Station and ran upon the Old Sugarlands Store where we purchased some of the best molasses I've ever tasted. Today we'd stop by that Ranger Station again. This time we'll get two jars of the delicious concoction to consume with great care until the next trip here..  Oh so good.

The first known residents of Elkmont settled somewhere along Jakes Creek in the 1840s. Among those first residents was David Ownby (1816-1889). These people came to the area in search of gold. The small community was known during that time as "Little River".

In the 1880's a man named John English began a logging business in the area, but in less than 20 years, English's logging operation had folded, probably due to flooding of the Little River,

In 1901, a Pennsylvanian, Colonel Wilson Townsend, began a second logging operation and would create a railroad for transporting the logs down the river. His company, The Little River Lumber Company, would formally established the town of Elkmont in 1908 as a base for its logging business.

Later, Colonel Townsend would allow hunters and fishermen to use the land he owned in Elkmont. When the timber rich valley was stripped bare, Townsend turned his attention toward advertising his property as a resort. As a result, the Wonderland Park Hotel was constructed there in 1912. Later, when memberships in Townsend's hunting and fishing resort grew, small cottages were sold to the members and the elite of Knoxville swarmed the area.

In the 1920's, after a visit to see Yellowstone, one of the cottage owners began circulating an idea that the land used being used by so few should be made available to all Americans.... like a big park. Yeah, a big ole national park... like the one at Yellowstone.

And so America's system of National Parks begins. Thanks to the little Appalachian community of Elkmont, Tennessee. 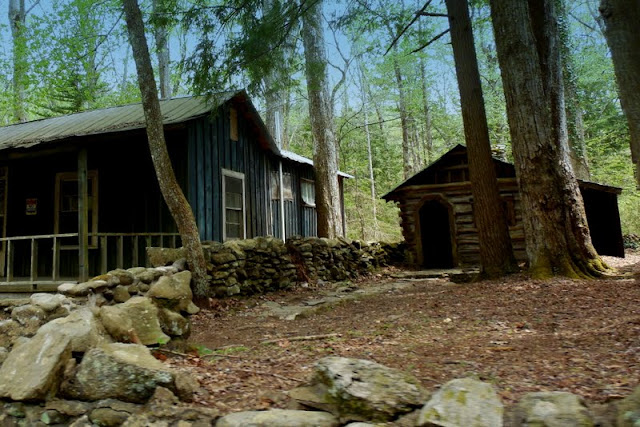 There's plenty more to know about the disposition of the remaining structures here in Elkmont. For anyone interested in reading the current status of the ongoing project or the surviving structures and to learn more about The Wonderland Park Hotel, this chart of the historical buildings will be worth seeing.

Lem Ownby, David Ownby's legendary grandson, was born near Jakes Creek in 1889. In 1908, Ownby and his father built a cabin about a mile or so above the confluence of Jakes Creek and Little River where Ownby lived for the rest of his life. Ownby obtained a lifetime lease in the 1930's when the national park was established, and for several decades afterward sold honey to hikers.


Wayne and his brother had occasion to meet Lem Ownby in the early 1980's when they were in the Elkmont area and came upon the old man and his cabin.   They had no previous knowledge of Ownby's existence.  They sat with Mr. Ownby, on his porch, for a long time that afternoon and listened to the stories he told. They didn't realize back then just how colorful a character was this man, Lem Ownby.

At one time, two U.S. Supreme Court justices tried to meet Mr Ownby but failed. As the story goes, the Justices were visiting a Knoxville lawyer friend who wanted to introduce them to a real mountain man. The lawyer led the two Justices up the trail to meet Lem only to discover Lem would not be introduced to them.

When the lawyer knocked on Lem's door and announced that he had two Supreme Court Justices outside for him to meet, Lem simply replied that they were not welcome. The lawyer was humiliated. The Justices found Ownby's honesty refreshing.


Lem Ownby died in 1984. He was the last of the park's lifetime lessees outside of Cades Cove.

Leaving the isolated Elkmont area we happened upon the apparatus in the photo below. It was several hundred feet off the roadside. I zoomed in and snapped a picture.  I am not sure what the apparatus is but it sure looks like a trap for something big.... maybe a bear? 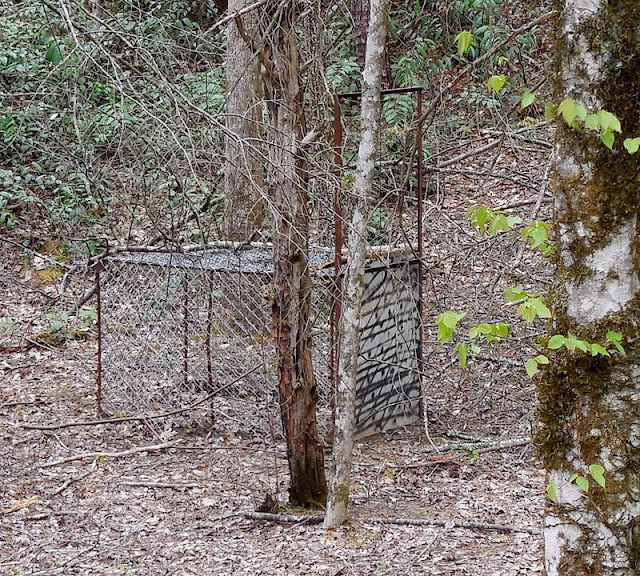 Driving back through Gatlinburg, we stopped in some of the tourist traps. Wayne tried several of the complimentary tastes of Ole Smoky Tennessee Moonshine flavors from the distillery that's there. 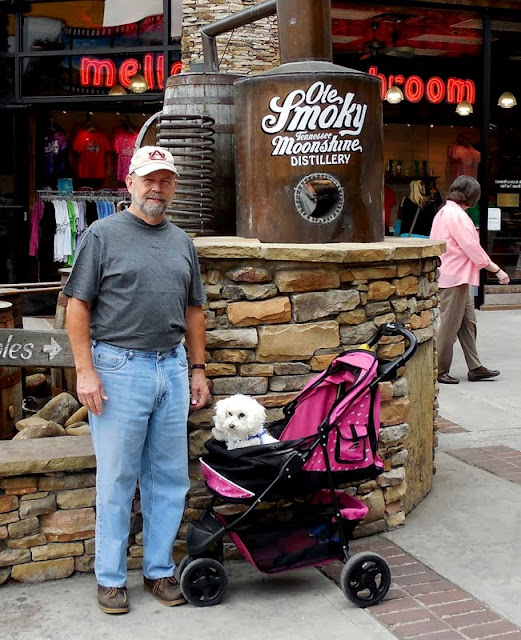 Something we've never done in previous visits to Gatlinburg was to take the ski lift to the overlook.  At the time we took this picture, the lift is closed. A strong thunderstorm is headed our way. It's an ominous precursor of days to come.


The rally we're in Sevierville to attend is scheduled to kick-off soon so my next post will cover our experience.
Email ThisBlogThis!Share to TwitterShare to FacebookShare to Pinterest