Late in the day after touring Fort Sumter, Ken, Nancy, Wayne and I rode six miles out Highway 17 from our Mount Pleasant campground to a tiny spec of a town named Awendaw, SC.  We wanted to eat at See Wee Restaurant.  It was highly recommended by the folks who manage the KOA Campground.

See Wee Restaurant is not a fancy place by any stretch of imagination. It's in an old general store.  In fact, I read that the general store opened in 1920 and remained a store until the building was sold to become a restaurant in 1993. There's no "theme" to the decor other than "real old"...

The restaurant's motto is "Simply Good Food". We were greeted, seated and presented with a basket of hushpuppies to nibble on while we looked over the bill-of-fare.

The name “See Wee” comes from an Indian tribe who, in the late 1600's lived in this part of South Carolina. Many of the See Wee were sold into slavery in the West Indies. By 1715, there were fewer than 57 See Wee Indian souls remaining here. None exist today, I've read. 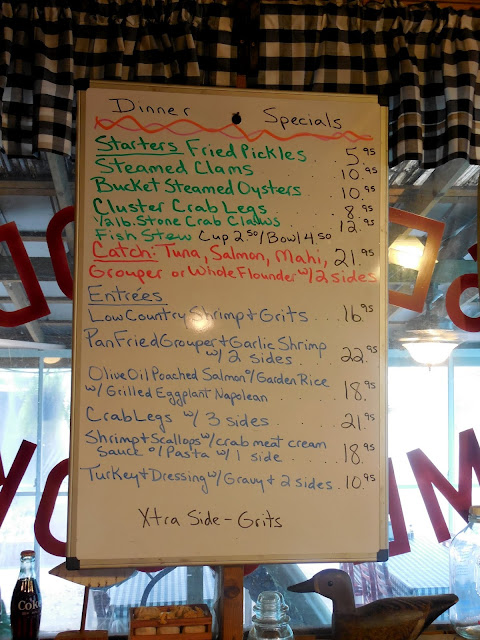 In the end, I ordered whole fried catfish with fried green tomatoes, sweet potato fries and yellow squash. Wayne had shrimp. For the life of me, I can't remember what Ken or Nancy ordered but I think at least one of them ordered shrimp too.


Turned out we all left See Wee a little disappointed... I can't put my finger on why exactly. The hushpuppies were good as were the fried pickle appetizer. My catfish was cooked to perfection and my side dishes met my expectation.   I think Wayne felt as though he had been coerced into ordering a larger meal than he really wanted and maybe Ken did too. Nancy's dinner was good, I think, but not outstanding.