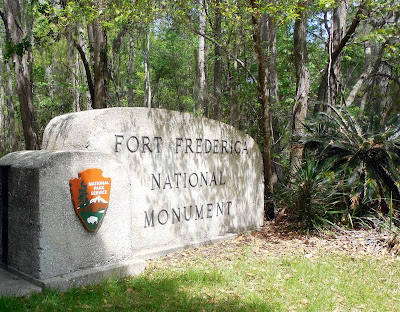 As mentioned in the first part of this post, our Easter holiday day trip took us to out to the Golden Isles of Georgia from Country Oaks Campground in Kingsland just for something to do.


We didn't know anything about Fort Frederica or why there would be a National Monument to it at St Simons Island, Georgia.


We didn't do any real research before heading this way. But we arrived, went into the Visitors Center and learned more in two minutes, from a very knowledgeable National Park Ranger, than I could have gleaned from reading all morning.

I love the National Parks Service....

It's no wonder I didn't know anything about Fort Frederica or the battles fought here on St Simons. The British were fighting the Spaniards! And the Brits won! Twice!

Georgia's fate was decided in 1742 when Spanish and British forces clashed on St. Simons Island. Fort Frederica's troops defeated the Spanish, ensuring Georgia's future as a British colony. Today, the archaeological remnants of Frederica are protected by the National Park Service.

Fort Frederica's military town lived, flourished even, for only about about 50 years.  The ruins that remain are an important part of the history and struggle for this part of America.

During this particular period of time, Spain and England were both eager to claim the stretch of coast from Charleston, SC to St Augustine, FL. Spain's power was waning while Great Britain was growing ever stronger.  Great Britain had built an empire from Maine to Carolina that had begun the  colony system.  Georgia would be the last of the original 13 colonies.

Turns out a prominent English citizen, James Oglethorpe, soldier and politician, petitioned the British Crown for a land grant south of the Savannah River. The government agreed. Oglethorpe got along well with the local Indians who were living in this area and in the end, the Indians would fight alongside the British against Spain.

﻿
As nice as this monument is, it was made even nicer as we could take Lexie and Ozzie all over the grounds with us.  They didn't have to stay in the stroller either.  The Park Ranger explained that as long as they were under our control they could be on the ground.  For a few minutes we let them both out to stretch their legs.

Once we had walked all the way out to the water to the actual fort and munitions area, the sea breeze became pretty strong, adding just a little coolness to a sunny, pleasant day.  We couldn't have asked for better weather.  It was ideal.

Walking the grounds of Fort Frederica took less than an hour. Just long enough for us to work up a lunch appetite.

We drove back into St Simons Island to find ourselves bumper-to-bumper with Easter Break families on rental bicycles and golf carts. They were everywhere! Parking places were not to be had.
﻿


To our surprise the DQ was not overwhelmed like the street cafes. We stopped in for a burger and ended with two, yes, two DQ Blizzards. The first one was my favorite, Butterfinger.

The second was Chocolate Cherry Love.

At least they were both small sizes.


The St Simons Lighthouse was a natural next stop. It was just a few blocks from the DQ and we certainly needed to walk off a few of those Dairy Queen Blizzard calories.

The lighthouse construction began in 1807. It was built of tabby, a material similar to concrete, made of crushed oyster shells, sand, lime and water.  The light was first illuminated in 1811. The initial lighthouse really didn't much look like the one you see here today. 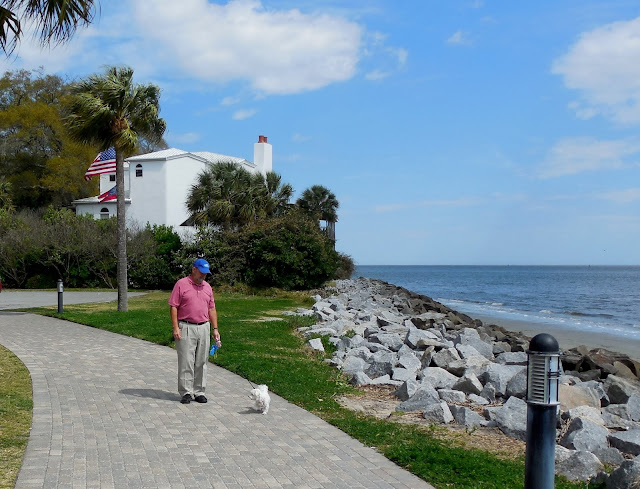 St Simons Lighthouse property sits adjacent to a public beach area, complete with a nice cobblestone walkway and several wooden walkways across the rocky shoreline to the beach.  It was much too cool and windy for Wayne and me to go to the waters edge.  We did walk Lexie and Ozzie around on the sidewalk and the grass, near the water, though.

Among the big rocks around St Simons Lighthouse, we found these two mourning doves who seemed to be protecting a nest.  We watched them for just a few moments... no point in causing the little birds unnecessary angst. 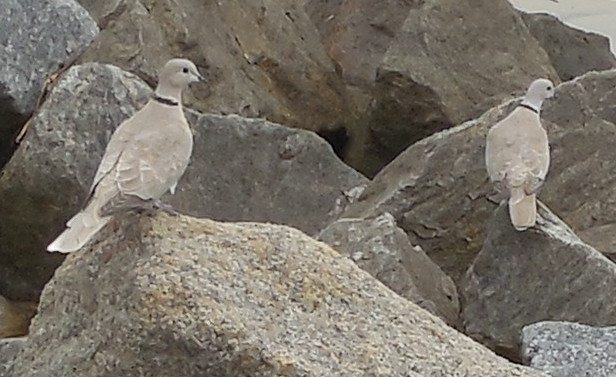 This property was originally known as East Beach Station.  The station had it's "First Watch" on April 1, 1937 -- exactly 106 years ago. When the station was first opened, the beach was just a few feet from the front door. Since then, sand has filled in the area.

In 1942, WWII came to the coast of Georgia when, On April 8, a German submarine sank two merchant ships, the SS Oklahoma and the Esso Baton Rouge, off the coast of St. Simons Island. Twenty-two men died. The surviving crew members and the ship's mascot, a dog, were brought here, to the Coast Guard station.

Five recovered bodies of the incident could not be identified. The bodies were buried together in Brunswick's Palmetto Cemetery. The grave marker was marked simply, "Unknown Seamen 1942". Later, one of the bodies was identified and sent home for burial. 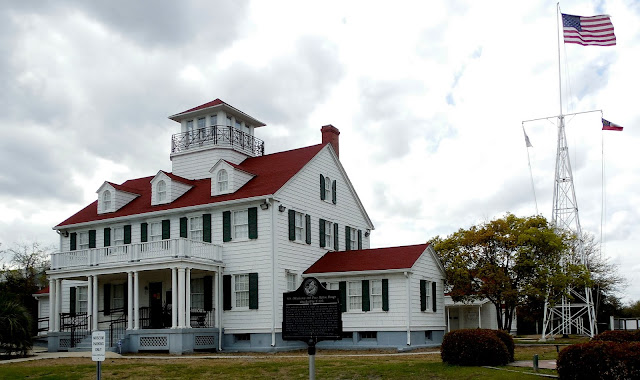 Today while poring over various news items, I ran across a clip, dated today, April 1st, that refers to a sequel to the comedy Anchorman: The Legend of Ron Burgundy being scheduled for production at St Simons Island, a good deal of it on and around this property.   Click here if you'd like to read the news article.

Feeling pretty awesome about our luck in finding good stuff here on St Simons Island today, we turned the car toward home.  But alas!  What did we see sitting on the tarmac of St Simon's airport?
Fearing we'd be caught gawking at the Dolphins' jet, we stayed just a moment before returning to the main road to Brunswick.


Wayne's area factoids continued as he told me what he knew about Liberty Ships being built here.  These vital ships supplied Allied troops around the world. They are a very important part of Brunswick's history.

Being Easter Sunday, downtown Brunswick was deserted and quiet.  We made a quick pass through and I snapped the picture below.


Going back across Sidney Lanier Bridge, we looked down to see the unusual sight in the photo below. Wayne guessed this might have been the location of launching the newly built Liberty Ships in the 1940's.  Turned out he was right...  This place on the north side of the bridge will become Liberty Ship Park and will honor the men and women who worked in Brunswick's shipyards building Liberty Ships.
In the end our Easter 2013 was as pleasant as we could have hoped.  Thanks to everybody who shared in what we saw today.
Email ThisBlogThis!Share to TwitterShare to FacebookShare to Pinterest