Columbia is the largest city in South Carolina and is in the center of the state. The weather was about perfect the days we visited the capitol and downtown. It was Saturday and not much was going on except for the runners, joggers and walkers who take advantage of all the streets being traffic free.

A bit of history.  Charleston was the first capitol of this fair state, but in 1786, the Assembly of South Carolina voted to move it here, to Columbia, a more central location.  In 1790 the state's legislature met in Columbia for the first time.


General William T. Sherman and his Union army captured South Carolina's State Capital on February 17, 1865 and burned the old State House.  All that remains to remember the original Columbia State House is this headstone. 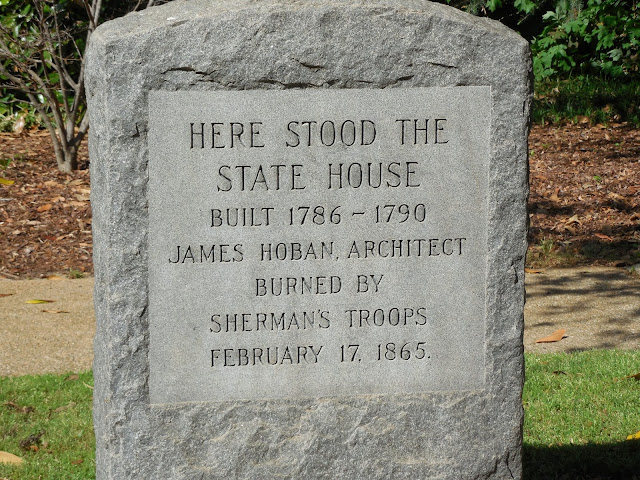 In addition to the loss of the old South Carolina State House, shells from Sherman's cannons hit the new building. Brass markers have been placed on the west and southwest walls of the building to show where the shots hit.

Walking around the State House and among the governmental buildings that surround it, there were plenty of monuments to read and beautiful plants to photograph.

The unusual monument in the photo below is South Carolina's memorial to the Palmetto Regiment.


Another strange memorial is the one in the photograph below. This Spanish -American War monument originally held a cannon. The cannon was captured in Santiago, Cuba in 1898. In 1942, however, the cannon was removed and used as scrap iron.  Proof of the great American spirit. 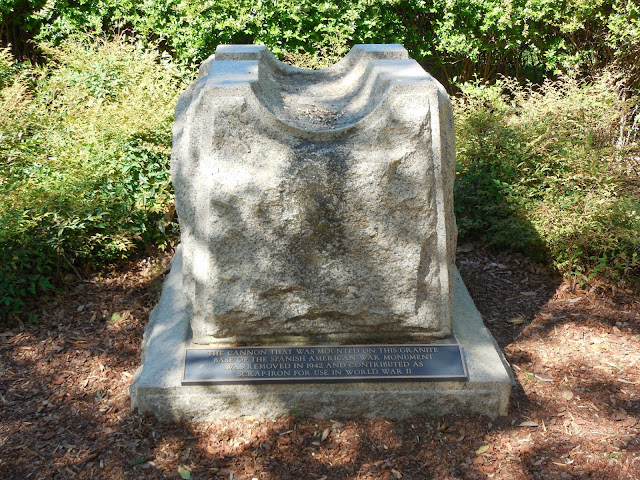 This view of the South Carolina State House includes a memorial to the state's fallen law enforcement officers. 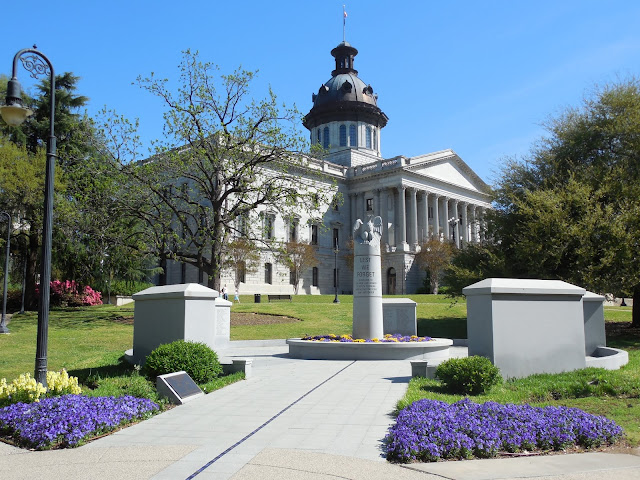 And from this angle, the State House view includes a statue of Strom Thurman, 103rd Governor of South Carolina (1947-51) and US Senator for 48 years!


The statue in the photograph below was my favorite but Wayne cut the top of it off.  It is a statue to the "South Carolina Women of the Confederacy 1861-65 -- Reared By The Men of Their State 1909-11" 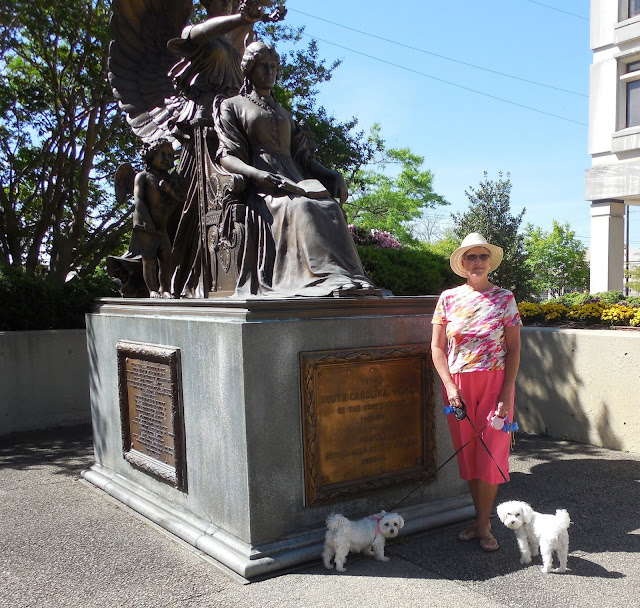 Our final State House grounds photograph would include some of the beautiful blooming bushes.  In the background, the top of a church steeple can be seen.  That's our next stop.

The original church was dedicated here in 1814 and the present church in 1848.  The churchyard cemetery hosts the remains of five South Carolina governors, a US Senator, soldiers of the Revolutionary War and later American wars.

This First Presbyterian Church was established in the mid 1790's. In my opinion, it's the prettiest church building in town. It sits at the corner of Lady and Marion Streets. This churchyard's cemetery holds the remains of several notable figures in the history of the church and the community, including the parents of President Woodrow Wilson.  The grave of Ann Cunningham, the founder of the Mount Vernon Ladies' Association, credited with having saved and preserved George Washington's home, is here too. 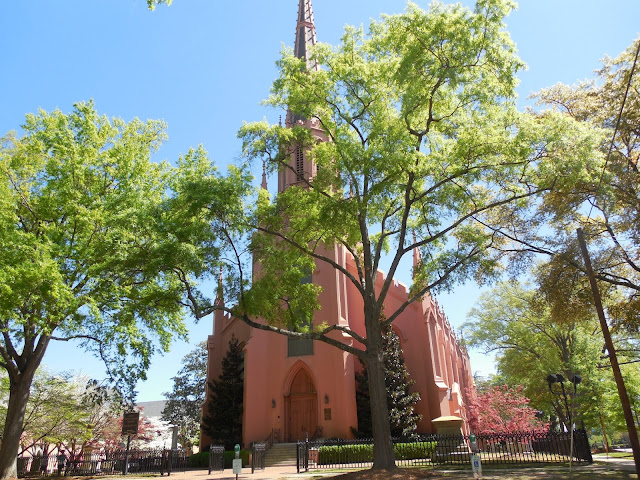 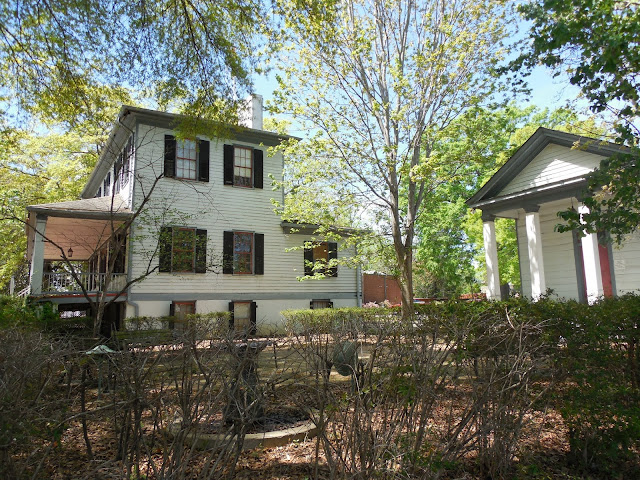 University of South Carolina - Home of the Gamecocks

After exploring downtown Columbia, we took a ride out to see the University of South Carolina campus.  Regular readers of this blog know we enjoy touring college campuses.  Our timing was either very good or very bad, depending on your point of view.  Today was the day of the USC Gamecock spring intersquad football game.  The crowds of fans made the visit to the stadium exciting, but driving was troublesome and we couldn't get as close to the stadium as we would have liked.   Here's what we did get to see. 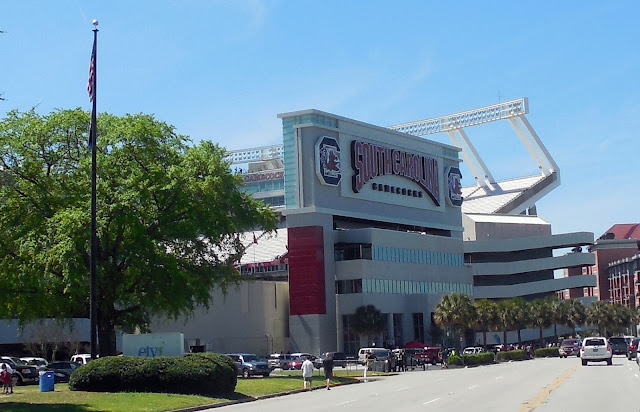 In the end, Columbia, South Carolina has to go on my list of terrific cities.  I really liked it.

Tomorrow we're moving along, making our way to east Tennessee for a rally in late April.  We'll probably make a stop or two more before then though.
Email ThisBlogThis!Share to TwitterShare to FacebookShare to Pinterest