The Road From Albuquerque To Santa Fe

Santa Fe, the capitol of New Mexico, is only about 65 miles northeast of Albuquerque along I-25, and that's the route we took when we left Albuquerque. Because our campground was several miles west of the city, we had to backtrack to the interstate interchange.

While in Albuquerque we've managed to become infested with big dispicable moths. Every night we kill several of the big (1") monsters as they flutter around the TV and the lamps, banging their heads and bodies around on the ceiling. Now we have moth "dust" on the white ceiling.  We can't figure how they've gotten into the coach, but they did and it's reminiscent of the "stink bug" infestation we got in a two day visit to Virginia in late summer 2010.


It was only after we arrived at Santa Fe we learned about a much more scenic route that we should have (and would have) taken if we'd learned about it earlier. Nevertheless, the scenery was beautiful along I-25. They call New Mexico a Land of Enchantment and it's easy to see why it has that nickname.

I managed to snap a few pictures of the landscape even with Lexie and Ozzie in my lap. The dogs are not yet comfortable (and may never be) with the diesel engine's roar and they seem to relax in my lap especially when I let the footrest up and make a nice, big, soft (fat) lap-bed for them. 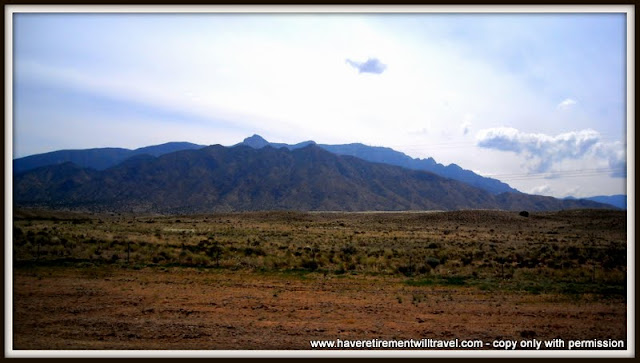 Leaving Albuquerque, the Cibola National Forest (including the Sandia Mountain crest) can be seen  on our right.

The Rio Grande runs along the highway and is easily distinguished as it is so deep green. Occasionally, large trees are seen poking up and they do look out of place.

North of Bernalillo, the plains become just that -- plain. To the left, however, we first see the plateau of the Zia, Santa Ana and San Felipe Indian Reservations. The highway here is long, straight and mostly flat. We can see miles ahead...

A Rest Area is located just outside Santa Fe. We pulled over for lunch and to walk the dogs. The Rest Area itself is interesting with several historical markers identifying some of the landmarks.

Because we're ascending in elevation we have to remember to adjust the air pressure in our Sleep Number bed.  I can't help but wonder if it would explode if we didn't reduce the pressure. Ummm. 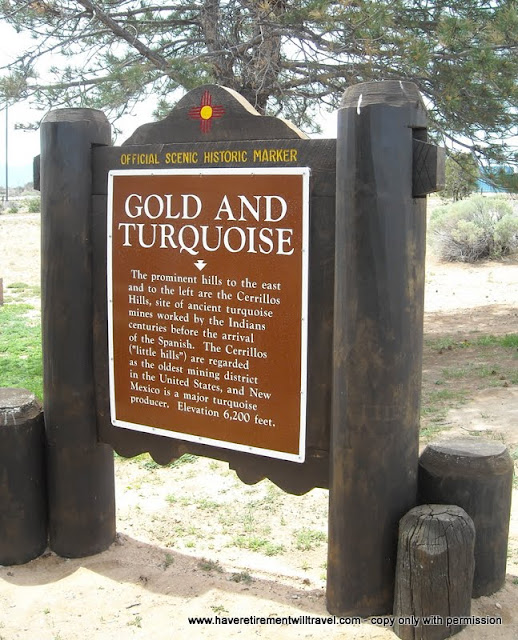 This marker about Gold and Turquoise identified the Cerillos Hills seen in our earlier photographs. Ancient turquoise mines here were worked by the Indians long before the arrival of the Spanish.

The Cerrillos little hills are regarded as the oldest mining district in the United States.  New Mexico is a major turquoise producer. 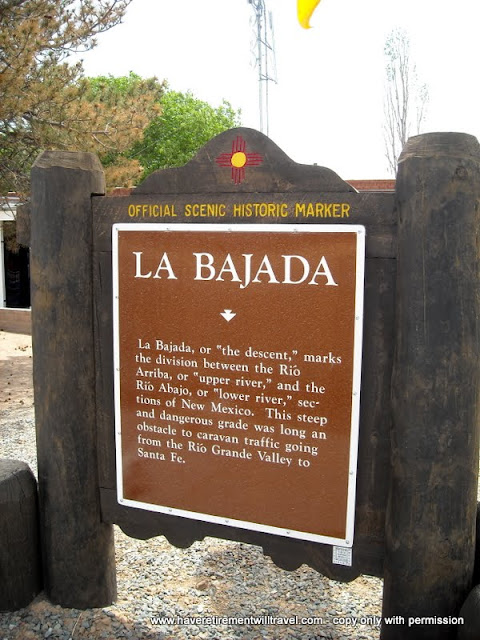 We'll manage to reach the campground in early afternoon and get set up just before an afternoon windstorm followed by a few drops of rain and plenty of thunder.  After the nightly moth killing ritual, the rentless wind forced us to pull the coach slides in to save the canvas slide covers. These are treacherous winds, folks!
Email ThisBlogThis!Share to TwitterShare to FacebookShare to Pinterest