It's always hot driving west in the afternoon and the drive from Amarillo to Albuquerque was no exception. Some nice scenery though...

American RV Park in Albuquerque is right off I-40 atop Nine Mill Hill, so named because the hill starts in downtown Albuquerque and ends nine miles later.  In a rare move, at check-in, I refused to accept a space facing west. I cannot tolerate any more hot western sun baking the front of the coach. 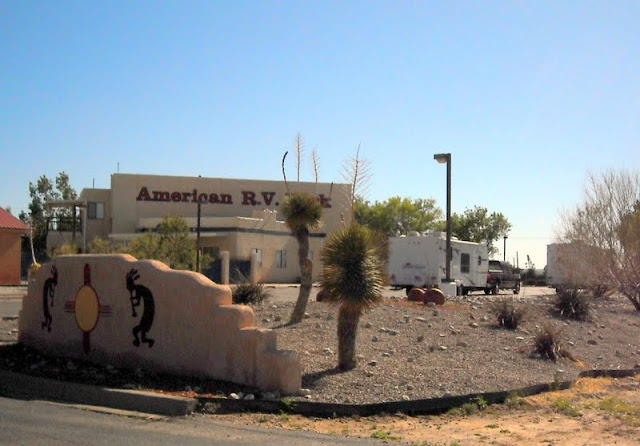 The campground host was accommodating and offered to show me a few sites he thought we'd like.  Here's where we ended up.


Albuquerque straddles the Rio Grande with I-40 and I-25 making a "plus" sign right in the middle. This is the largest city in New Mexico but isn't the capitol. New Mexico is the 47th state added to the Union and celebrated it's 100th birthday as a state in January of this year.  Albuquerque is well-known for the annual October Balloon Festival and there is a Hot Air Balloon Museum here.

Between metropolitan Albuquerque and our campground, the horizons look like this:

We expect to stay on here for a week.