Petroglyphs are designs and symbols carved onto volcanic boulders by American Indians and Spanish settlers 400-700 years ago.  One of North America's largest display of petroglyphs is in Albuquerque.  The display here was established as a National Monument in 1990 to protect them.


On Saturday, we visited Petroglyph National Monument.  I inquired at the visitors center and asked a few questions. Wayne isn't thrilled at the prospect of stomping around in the desert sun. He's content to wait under the awning.

Boca Negra Canyon the section of Petroglyph National Monument with the shortest trails. None of the trails are accessable with strollers, so we can't take Lexie and Ozzie. We will take turns getting out for the short 15 minutes it will take to see the designs.  Wayne isn't thrilled at seeing the petroglyphs but I'm a bit more curious... 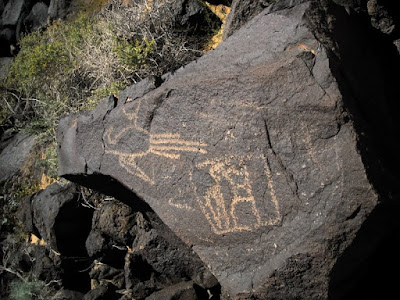 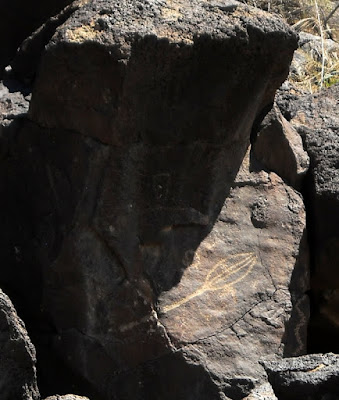 The big black rocks upon which the petroglyphs are written are boulders broken away from lava caprock that emerged from a volcano about 150,000 years ago. 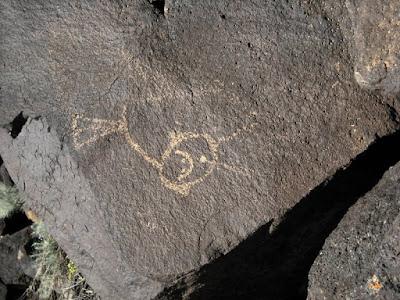 According to the National Park Service pamphlet, people of long ago chipped away at lava rock leaving a gray mark and it lasts 'till this day.  The American Indians believe these imnages are as old as time, but archeologists estimate that most of the markings were made 400-700 years ao by ancestors of the American Indians.  The pamphlet instructs visitors NOT to touch the rocks as body oil will make the marks disappear.  Now, I ask, does it seem logical that these markings were not touched for 400 years?  I dunno.

From the Boca Negra Canyon display of petroglyphs we drove around to Piedras Marcadas Canyon where we took Lexie and Ozzie out of the car for a little stroll. We had to be careful about snakes! 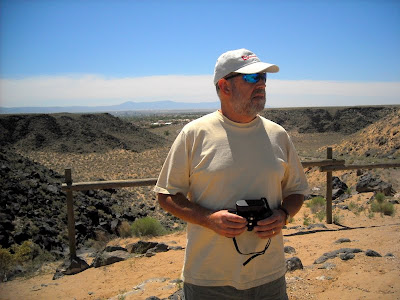 ﻿
Lunchtime is drawing near so we're off to find some eats!  More stuff in Albuquerque to see afterward!