Our Afternoon At Ghost Ranch

Georgia O'Keeffe's life and work for fifty years at a place called Ghost Ranch did immeasurable good in acquainting her art-loving fans with this special place. It is just a few miles beyond Abiquiu Lake going north on Highway 84.

We  drove to Ghost Ranch on a whim the afternoon after our lunch in Abiquiu. Even the car ride was spectacular! 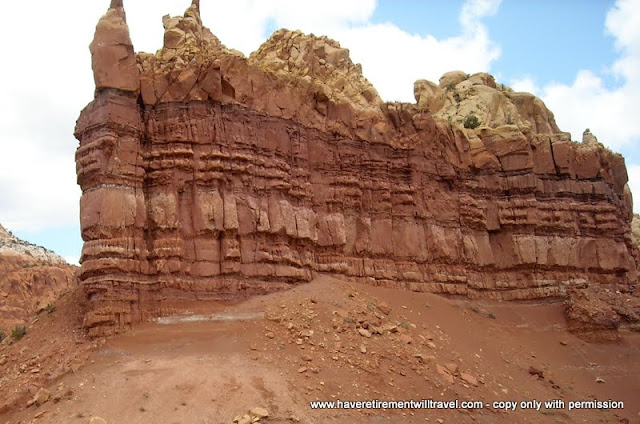 We didn't do any research about what to expect at Ghost Ranch but had seen lots of references to it since we've been in the area.  Our spur-of-the-moment decision to take the short drive out there turned out to be a real good thing as we found it to be quite fascinating.

For many years only a narrow dirt road led up the twisting Chama River Valley northwest from Abiquiu. The turn-off to Ghost Ranch was marked by an animal skull long before Arthur Pack bought the ranch in 1936. The animal skull would ultimately become the official Ghost Ranch logo.

The 21,000 acres that comprise Ghost Ranch were part of a land grant from the King of Spain in 1766. The grant was called Piedra Lumbre (shining rock).

The long, rough dirt road from the highway to Ghost Ranch puzzled us since we were going somewhere to see something we knew nothing about....  Nevertheless, the surrounding mountains gave us some more beautiful scenery. 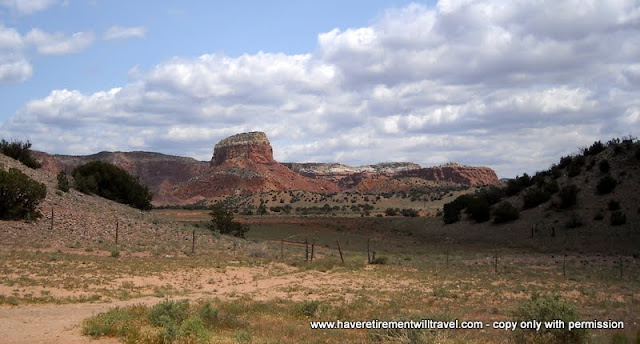 Ghost Ranch was given by Arthur and Pheobe Pack to the Presbyterian Church in 1955. I never learned under what circumstances the Packs came to own the property.

Then without warning or explanation, we happened upon this abandoned log house. No one was around. We stopped to snap a few pictures.


It is not surprising that today's name for this land is "Ghost Ranch," and the logo is a cow's skull.  The name "Ghost Ranch," or the local name "El Rancho de los Brujos," was derived from the many tales of ghosts and legends of hangings in the Ranch's history. We were told there were two cattle rustlers who occupied the home here. One shot the other and the townspeople then shot him!

The Ghost Ranch complex is huge and quite informal. Roads are dirt -- the same color as the buildings. Several huge shade trees (cottonwood maybe) provide shade.

After making an inquiry about the short hike to Chimney Rock (the most famous of the hikes at Ghost Ranch), I left Lexie and Ozzie in the capable care of Pop, grabbed some extra camera batteries, a bottle of water and made my way to the trailhead.  The hike is relatively easy, even for an overweight, out-of-condition, old geezer like myself.  The walk begins steep and then plateaus for several hundred yards. The "steep-then-flat" routine repeats itself all they way to the base of Chimney Rock.

Along my hike to Chimney Rock, I took pictures and videos, carefully recalling the names of the landmarks, the dates and how much I liked what I was seeing.  The fear of dead batteries didn't concern me as I had two fresh sets in my pants pockets.


What I didn't count on, however, was filling the camera's memory card.  It happened. There was nothing to do except sit down on a rock and flip through my photos and videos -- deleting the expendable ones in order to have enough memory to get pictures of the prize I was after.  I dared not press my luck.

A little more than half-way up, I met a man and woman who agreed to look for Wayne below and tell him that my hike was taking longer than planned so he wouldn't worry about me.  After all, I told him I was only going to go a short distance up the path -- I didn't dream I'd really want to walk all the way --

Finally I did make my way down and "no" I didn't go all the way to the base of Chimney Rock.  I'll probably always regret my decision to turn around before reaching the end, but I was worried about leaving Wayne with the dogs in the warm temperatures, knowing he would worry about my safety.

When we got back to the coach, I kicked off my shoes and clothes and streached out on the bed. It was just at that moment I noticed the great view from the bed.

The next day as we were passing Ghost Ranch again leaving the area, I got another glimpse of Chimney Rock that I couldn't pass up.  It will be my last for awhile. 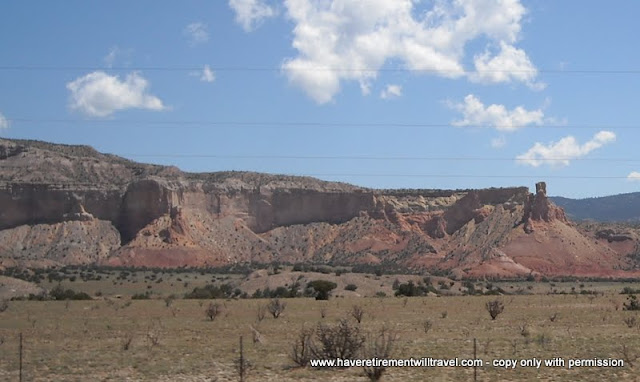