After last night's strong winds we decided to pull Endie's slides in this morning as we prepared to leave for the day. These winds are horrible, but I'm beginning to think we're getting the worst of it because of the campground's location here on a ridge.

Today's destination is nearby Pecos National Park to see the ruins of Pecos Pueblo, a 900 year old 700 room multilevel complex and the remains of a 17th century Spanish mission church named Nuestra Senora de los Angeles de Porciuncula de los Pecos (that was easy!).
At the Pecos National Park Visitors Center we gathered the necessary information and toured the museum before setting out on the 1.25 mile trail through the ruins. 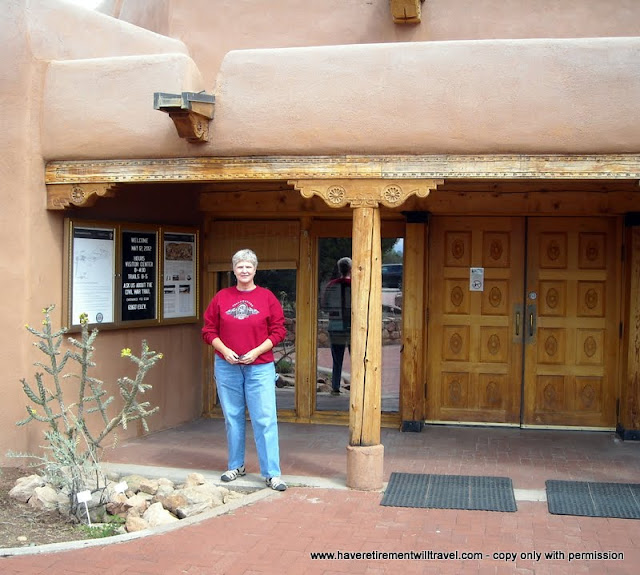 The museum was filled with very old treasures -- some dating back to the 1300's! Here are some of my favorite displayed pieces.
﻿
﻿
﻿ Anyone who knows us, even casually, knows we enjoy old movies. Imagine our interest in the plaque that identifies movie actress Greer Garson and her husband as benefactors of the Pecos National Park!  She and her husband Colonel E.E. Fogelson were long time patrons of southwestern archeology.  Colonel Fogelson was a lawyer, oilman, politician and philanthropist who was instrumental in having the ruins here placed under federal protection.  Greer Garson, as any fan of Turner Classic Movies can tell you, was heralded as one of America's top ten box office draws in 1942, 1943, 1944, 1945 and 1946. She won the Oscar for her performance in Mrs. Miniver.

Pecos National Park lies between the Sangre de Christo Mountains and Glorieta Pass in Pecos Valley. For over 10,000 years this land has unfolded continuously changing cultures. It is believed they came in this order: Pueblo and Plains Indians, Spanish conquerors and missionaries, Mexican and Anglo armies and then settlers traveling the Santa Fe Trail.

The Puebloan people created special places below ground called Kivas used for ceremonial and social gatherings. There were a couple of Kivas along the trail.  In the photo above, the Kiva is the closest large, round, dirt-covered area.
﻿﻿ The round stone walled areas known as "trash mounds" can be seen along the east side of the trail. They proved to be "time capsules" as centuries of discards in exact chronological order were piled here. These have been a treasure trove of scientific data. ﻿﻿


The mission (as a verb) of the Spanish Franciscans who came here before 1700 was to convert the Indians to Catholic Christianity. The Mission (as a noun) was a huge complex consisting of the church building and the convento where work took place. The convento included quarters, workshops, corrals, stables, kitchen, gardens and dining areas.
﻿

Leaving the mission and convento area, we finished the 1.25 mile walk back to the Visitors Center where we left the car.

Upon our return to the Visitors Center we were directed to a Pecos eatery named Frankie's Casa Nova Grill where we enjoyed still more of the southwestern ambiance along with a delicious 1/2 pound cheeseburger topped with chilies and peppers.  Oh so good.


On our way out of the area along the Santa Fe Trail, we stopped in to see the historical markers for the Civil War Battlefield at Glorieta Pass. 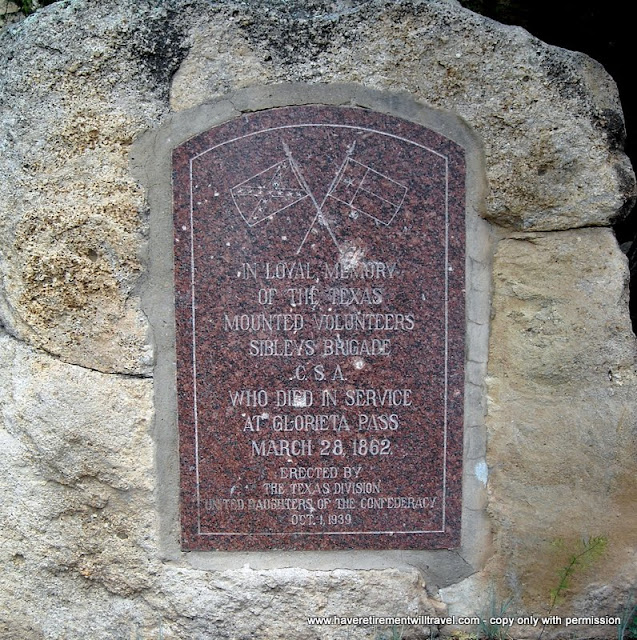 The area of Pecos National Park is flanked on the west by the Rio Grande and to the east by the Pecos River. The park is almost one-quarter million acres and encompasses mesas, canyons, lakes, waterfalls and over 150 miles of streams.
Email ThisBlogThis!Share to TwitterShare to FacebookShare to Pinterest