I have a  new favorite city: Santa Fe, New Mexico.  Never could I have possibly imagined how beautifully spectacular this city is!

Santa Fe Factoids:
We awoke this morning to bright sunshine and the 47 degree temperature rose quickly to the point of requiring the windows be opened!  Oh joy!

By mid-morning we were loaded into the car for a day trip around the old town of Santa Fe.

Our first destination was to satisfy our urgent need to refill our pantry with goodies from Trader Joe's.  We haven't been in one in months and we urgently needed a TJ "fix". 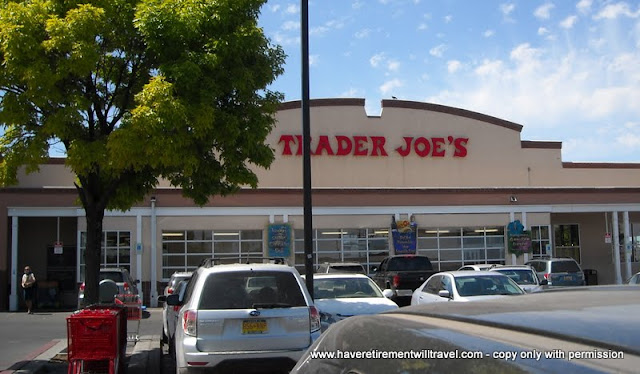 On our way into Santa Fe we got to see two of the New Mexico Rail Runner Express Trains. Both were stopped, although I can't imagine why. I was glad to get a good photo nevertheless.

The Rail Runner Express trains were a real bonus sighting for me as the Santa Fe Railway Station was on my list of things to see. I must confess, though, I was a bit disappointed at the station. We were unable to get out and look inside as there is no parking for visitors -- just passenger loading and unloading.
To insure we made the most of our time in town today, I've got Lady GaGa (our GPS) programed with all the sights on my "must see" list.   First to see: San Miguel Church, the oldest church building in all of the United States.  It did not disappoint.
San Miguel Church was built sometime between 1600 and 1646 to serve the Spanish poor. It is said that some parts of the original building date to 1100. 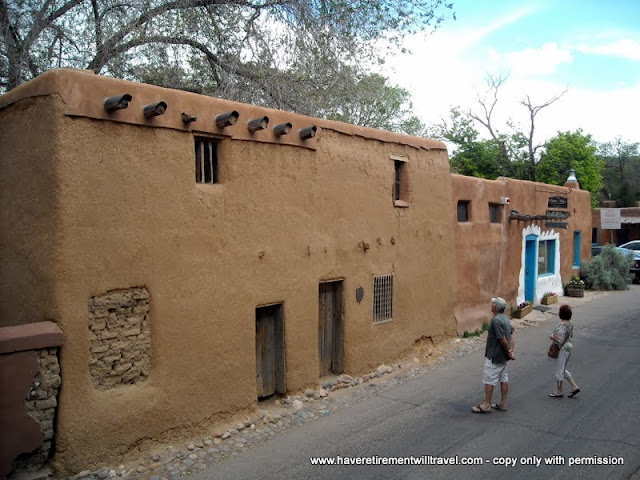 I snapped the picture of the Oldest House while Wayne visited inside San Miguel Church. When he came out the sky in front of us looked threatening, to say the least. I snapped another picture just as we headed back to the car to wait out whatever was coming our way.

While I wanted to see New Mexico's Capitol Building, Wayne didn't have much interest in it, so I made a mad dash across the street for a peek while he stepped into the Visitors Center.

Our next stop would be the stately Cathedral Basilica of St. Francis of Assisi, built between 1869 and 1887 under the direction of Santa Fe's first Roman Catholic bishop, Jean-Baptiste Lamy of France. The building is a mix of adobe, French, Romanesque and modern architectural styles with stained glass from France and stone from the town of Lamy, south of Santa Fe. 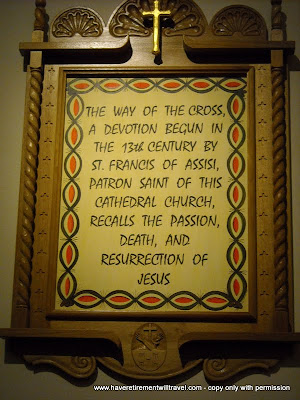 Yet another church awaited my visit today:  The 134 year-old Loretto Chapel. It's known for its miraculous staircase -- a spiral stairway with two 360 degree turns and no nails or screws -- just wooden pegs for support. The stairway was the subject of an "Unsolved Mysteries" episode on TV.


It's impossible not to be impressed by  the adobe styling and coloring of the buildings in Santa Fe. Everything seems to "match". I use the word "adobe" loosely here as I've read this is really a mixture of Pueblo and Pueblo influenced Spanish adobe styles.  The buildings are finished with the shaping of a mud-based substance onto bricks. The building are "low" here too.  Maybe because the roofs are flat -- I'm not sure.    Anyway, the following pictures are just some of the really nice buildings we saw today....

This old downtown area of Santa Fe might seem a bit touristy to some, but I loved it.  The wares being sold in the shops on along the streets were colorful and fascinating.  I wished the day had been a little longer... 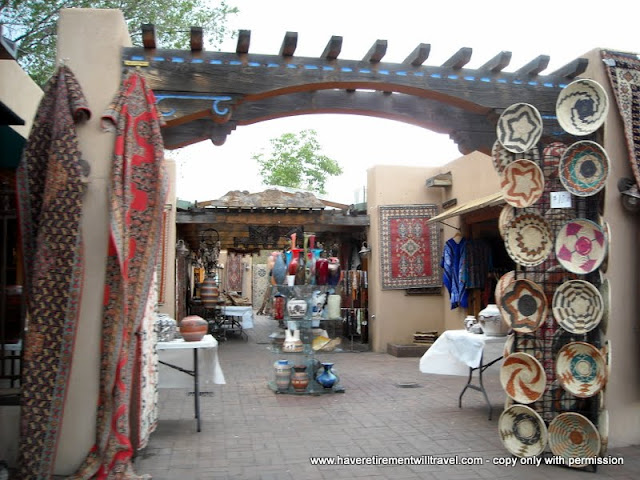 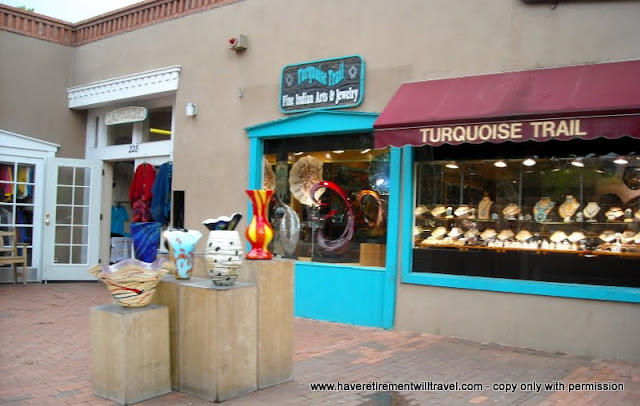 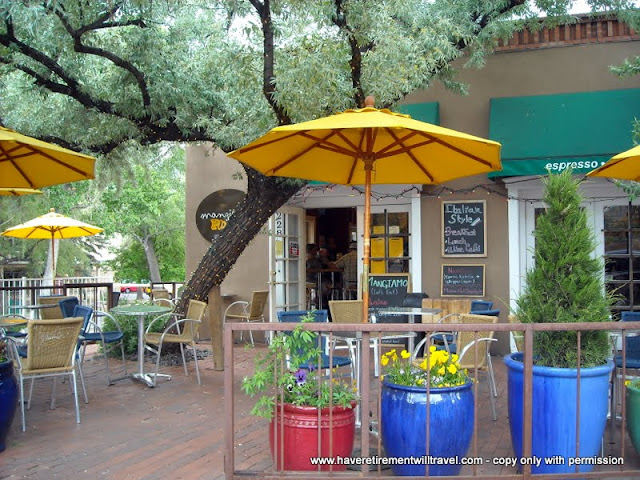 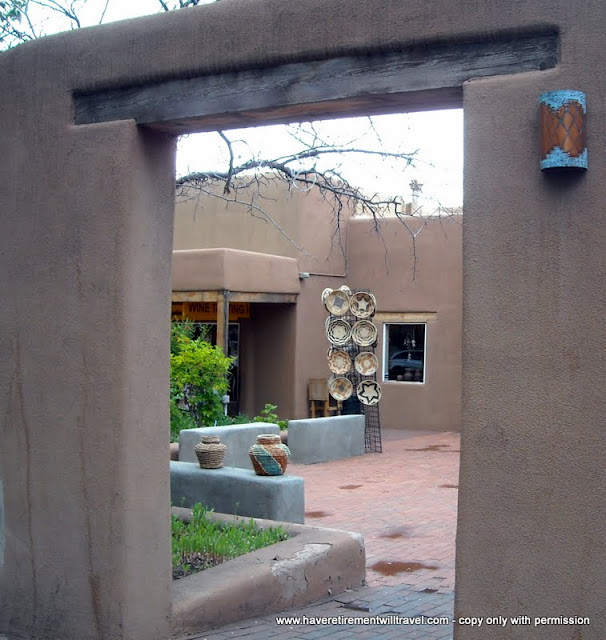 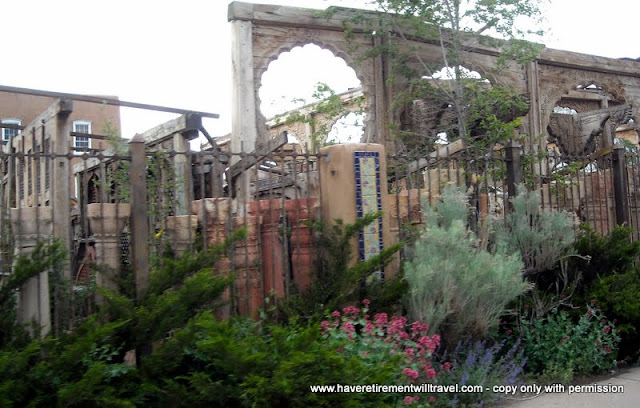 The Palace of Governors complex was another site we passed but didn't stop to see or get a photograph as we couldn't find a place to park.  One last stop in Santa Fe today would be to take another pee-pee break for Lexie and Ozzie.  The Federal Courthouse provided the amenities necessary: concrete sidewalk and grass. 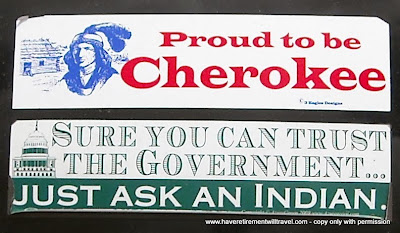 We returned to Santa Fe Skies Campground by 5 p.m. just about the same time the wind and rain set in. The dreadful, daily winds again caused us to pull the slides in for the second night.  I read that spring is the least desirable time of year to visit Santa Fe because of the wind...
Email ThisBlogThis!Share to TwitterShare to FacebookShare to Pinterest