Quick! What's 120 miles long, 800 feet deep and second only to the Grand Canyon in size? Why, it's the 18,438 acre Palo Duro Canyon near Amarillo, Texas. A beautiful place. Extra special when enjoyed with friends. 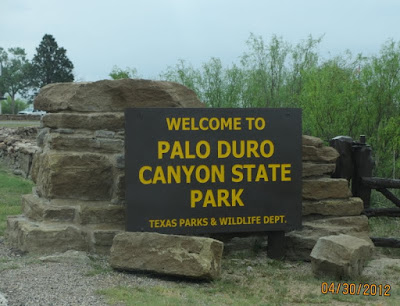 As planned last night, we'll visit Palo Duro Canyon State Park with Marcella and Landon today. They're in Rubi (their Rubicon) and we'll take Big Blackie. In doing so, we can accommodate ourselves and our dog children.

Palo Duro Canyon should, in my humble opinion, be part of the National Park system. It's that fabulous. But it is not. Instead, Texas is fortunate in having this beautiful treasure as member of it's state parks.

The first stop was at the Visitor Center where we took pictures while bundled in sweatshirts. The morning air was still cool. I knew the sun would warm us later in the day and it did. 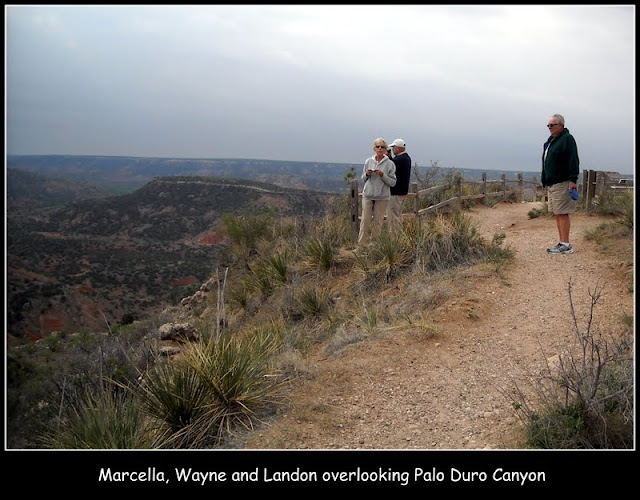 History
Palo Duro Canyon's history is wrapped around a horrible incident (in my view) of our country's history.  It's the Buffalo War -- the final campaign against the native people of this area, the Southern Plains Indians.  This was part of the Red River War (1874-1875).

In September 1874, the US Cavalry descended a narrow zigzag train into Palo Duro Canyon and attacked the Comanche, Kiowa and Cheyenne at dawn.  While only four Indians were killed during the ambush, all the homes, winter food provisions and livestock were killed. The surviving Indians were forced into the winter without food, homes or horses. Cavalry soldiers shot over 1,100 horses and left their carcases to rot where they fell. The only Indians that survived were forced to walk to Fort Sill, some 300 miles away, where their way of life was changed forever.  This sickens me.

Geologically Speaking
Palo Duro Canyon has a long history of human habitation -- some 12,000 years. It is reported (who proves such things?) to have been formed less than a million years ago. The Southern High Plains were carved by the Prairie Dog Town Fork of the Red River. 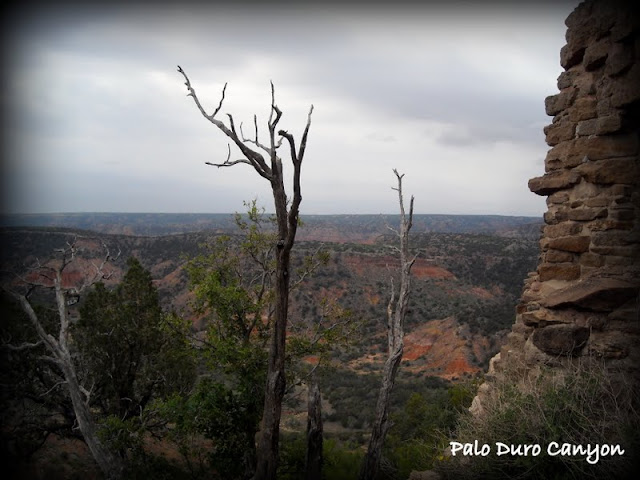 Palo Duro is Spanish for "hard wood" and references the Juniper trees that are seen throughout the canyon.  Other trees in the canyon are mesquite, cottonwood, salt cedar, willow, western soapberry and hackberry.   Wildflowers and grasses here include Indian blanket, star thistle, sunflower, paperflower, blackfoot daisy, tansy aster, sideoats grama, buffalograss, sage brush, yucca and prickly pear cactus.  I photographed some of the ones I liked best but don't know which they are.. 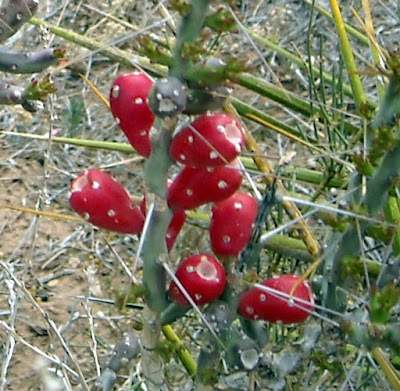 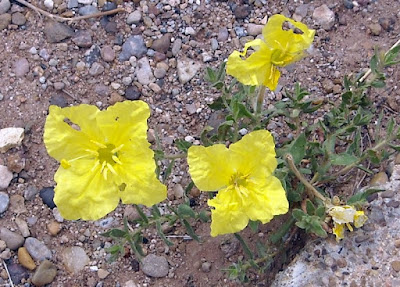 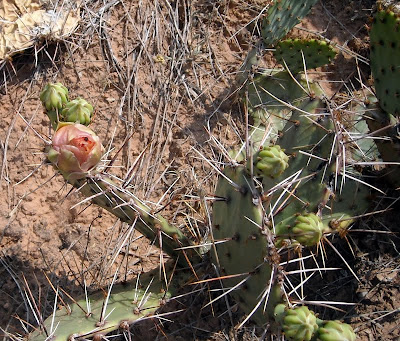 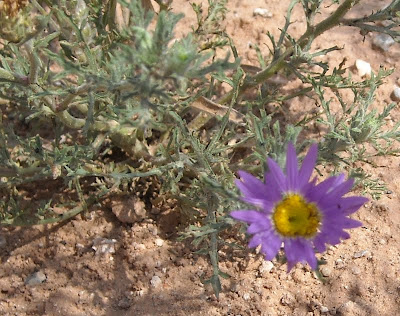 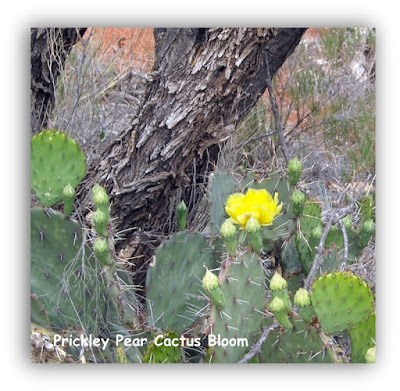 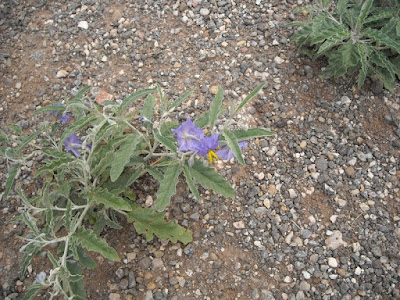 Just below the Visitor Center we found another scenic overlook with more beautiful views of the canyon. Of course we snapped a few dozen more pictures. I'll just post a few here... 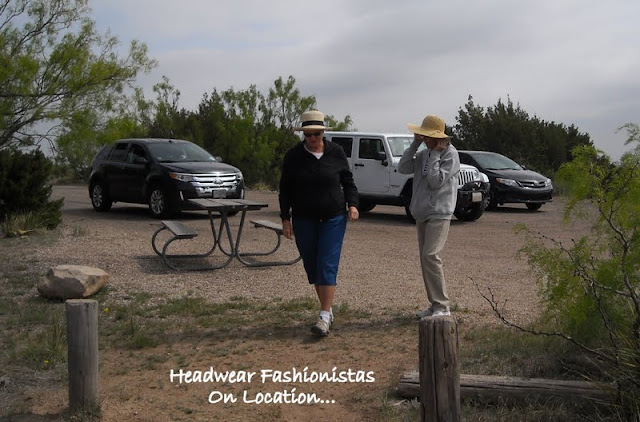 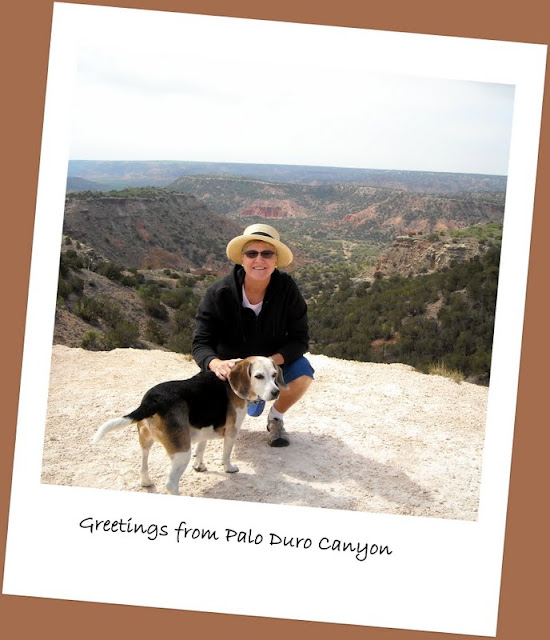 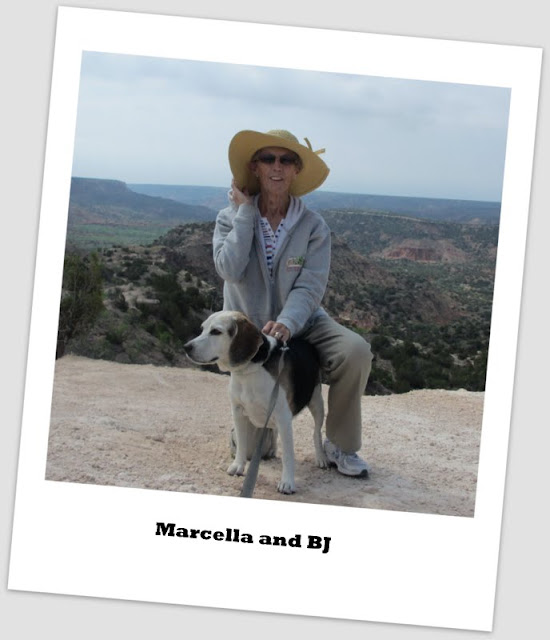 At the Pioneer Amphitheater, we found some unusual rocks that were not identified on the map.

Right about now, we're realizing how little progress we're making getting through the canyon.  Not to mention, I'm getting hungry (as usual).  A few hundred yards down the road we came upon a couple of picnic tables.


While we were stopped, Marcella chased down a wild turkey and I found some interesting things on the ground. 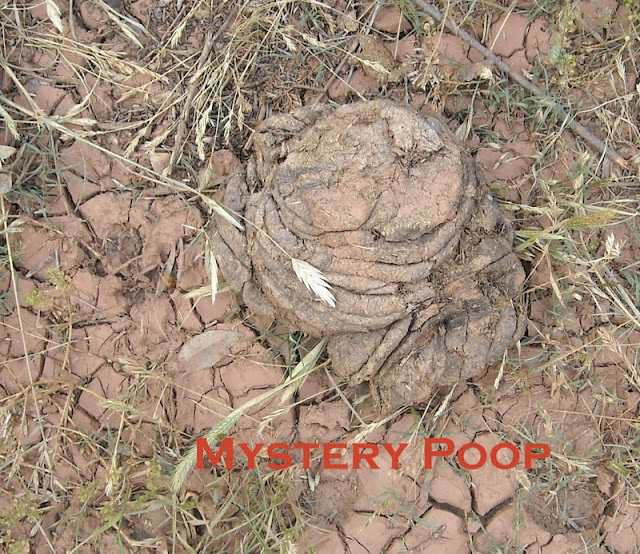 Getting ready to leave our pleasant picnic spot, we spotted a beautiful rocky mountain just across the road. Of course, we'll need to strike a few poses. 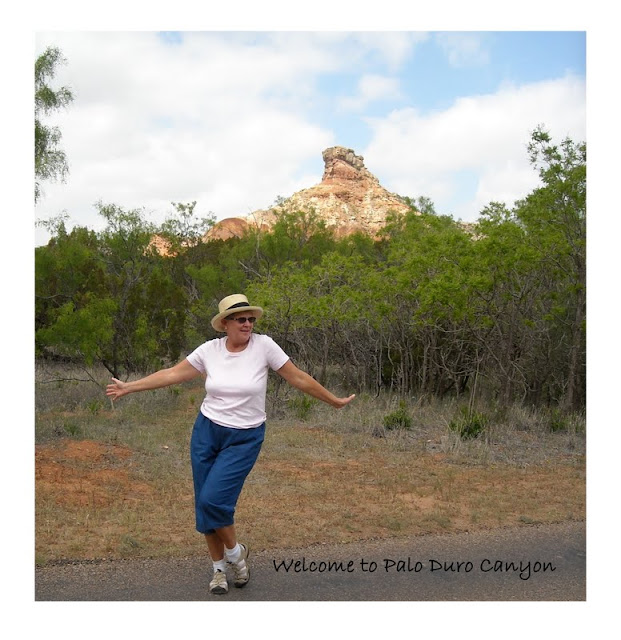 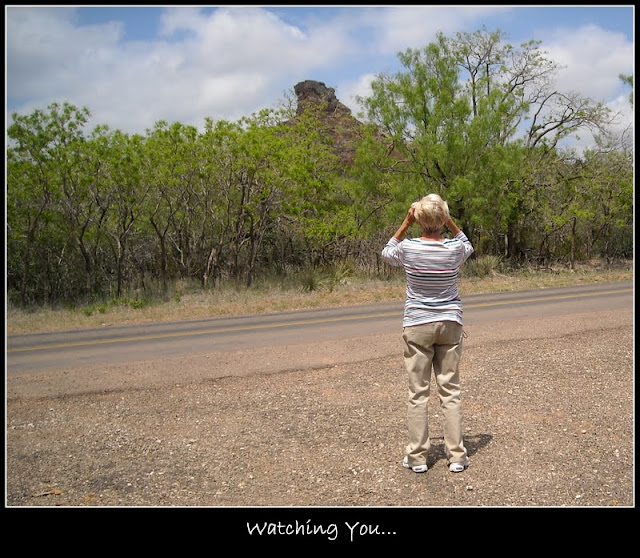 And then comes time for Landon and Marcella to get BJ back onto the throne ... er... I mean back into the back seat.  This is hilarious.  Yes, they pick this beagle up and put him in the back seat. And the back seat is decked out for comfort.  I'd ride there in a heartbeat. 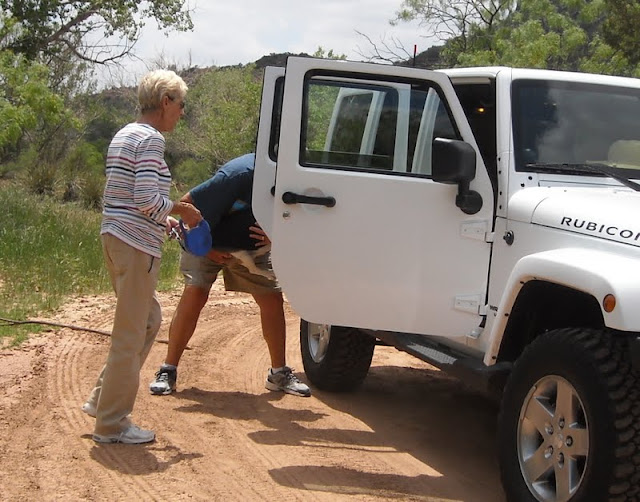 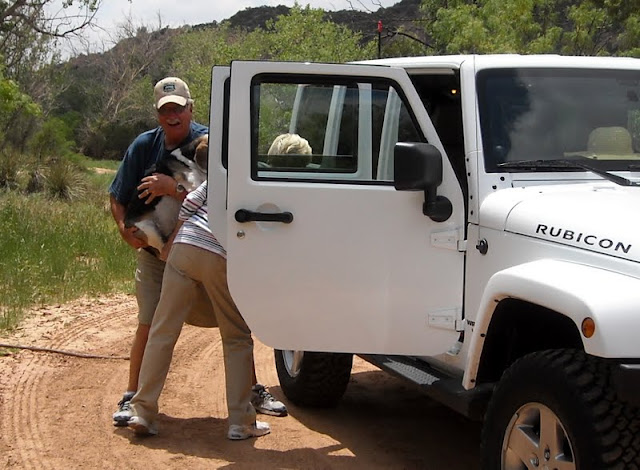 Now you might be wondering where Lexie and Ozzie during all this time.  Being the well-behaved little furbabies they always are.  It's cool enough for them to wait in the car during most of our photo sessions and we take then for walks where it's easy enough on their little feet. Of course, they've always got water close by too.
Lighthouse Peak is the shining star of Palo Duro Canyon and we caught our first glimpse of it just after lunch. The rock formation of Lighthouse Peak is just below a knol known as Castle Peak. 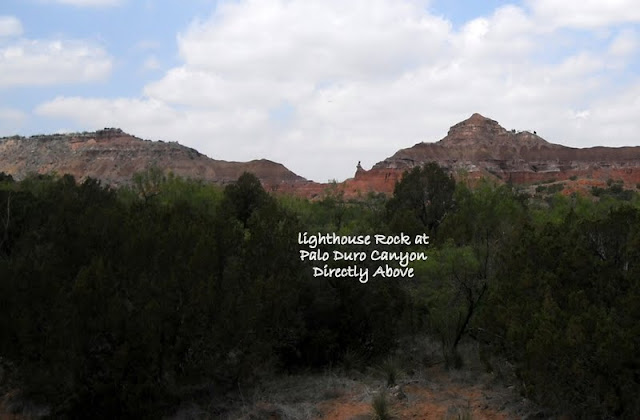 Lighthouse Peak and Castle Peak are a 6 mile round-trip hike off the road.  If the sun hadn't been so high and the temperature a bit lower, I might have enjoyed taking that walk... then I saw this: 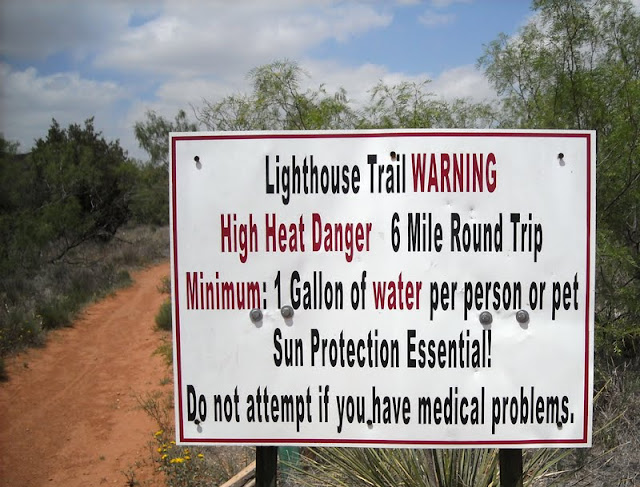 Our next stop was at Fortress Cliff but along the way, we saw some beautiful colored landscape and crossed the Prairie Dog House Fork of Red River six times. 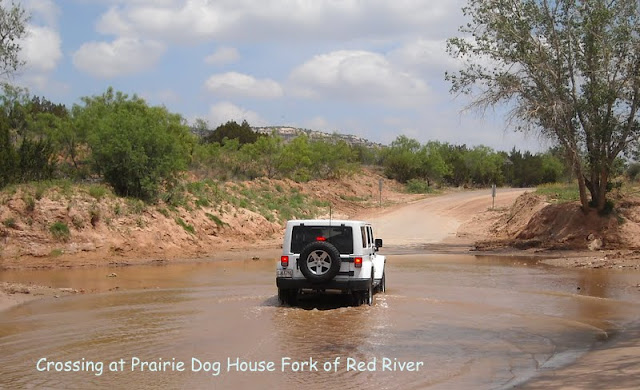 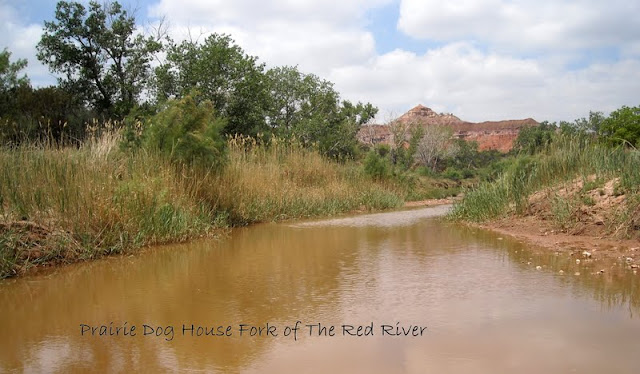 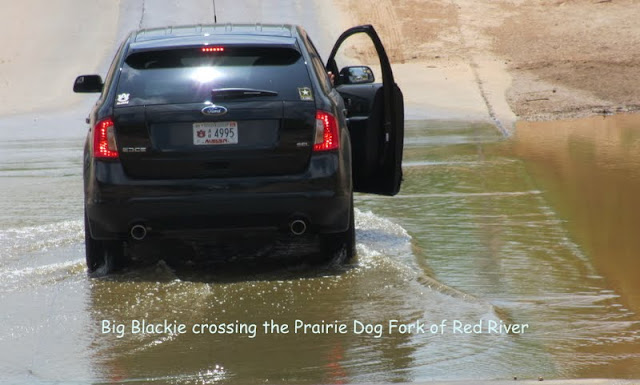 We came upon the Fortress Cliff and once again, bailed out of the cars with cameras in hand. 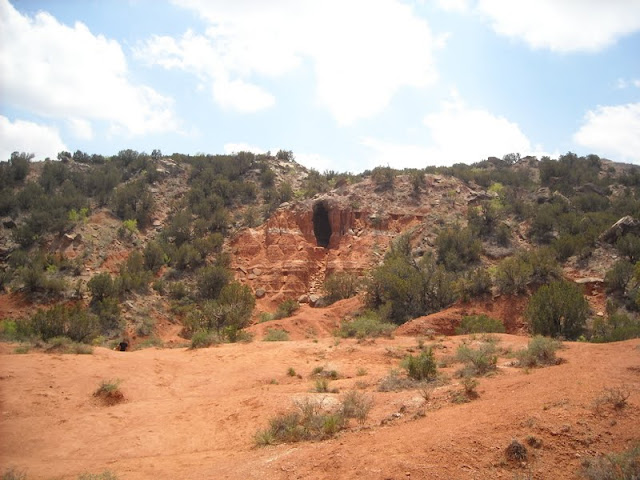 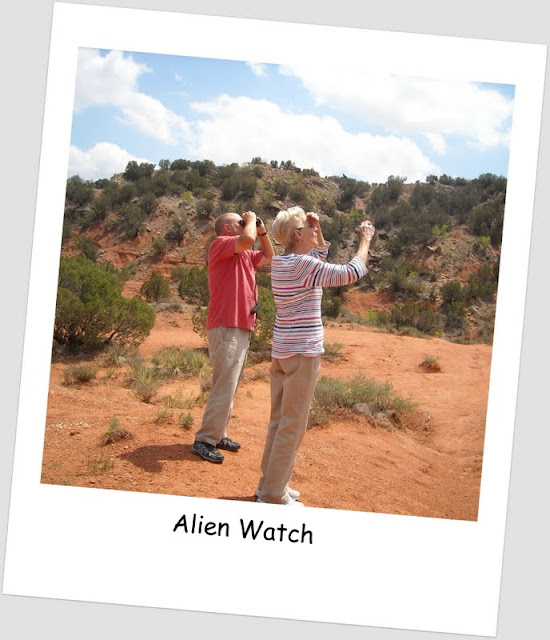 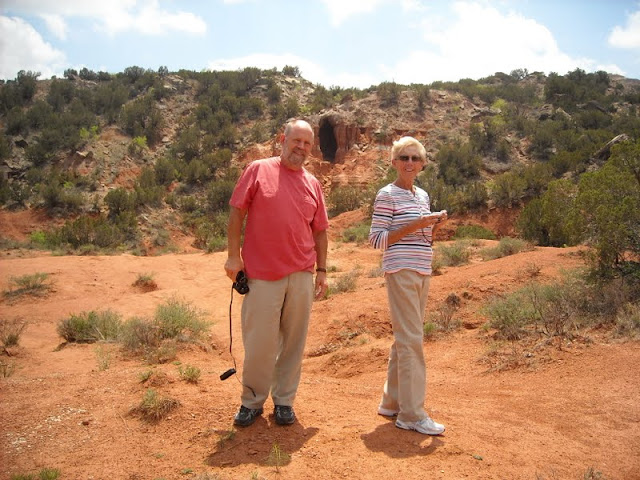 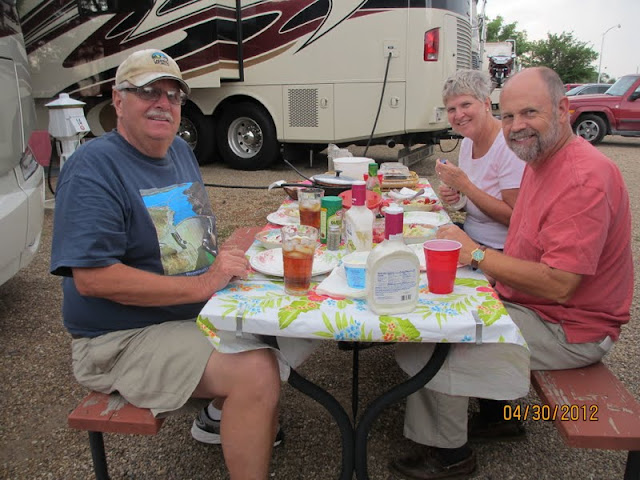 Exhausted from absolutely no exertion, we headed back to Amarillo Ranch RV where we chowed down on spaghetti just as the rain began....
Email ThisBlogThis!Share to TwitterShare to FacebookShare to Pinterest