Leaving Norman on a Saturday morning the skies were overcast but the temperature and traffic were mild. 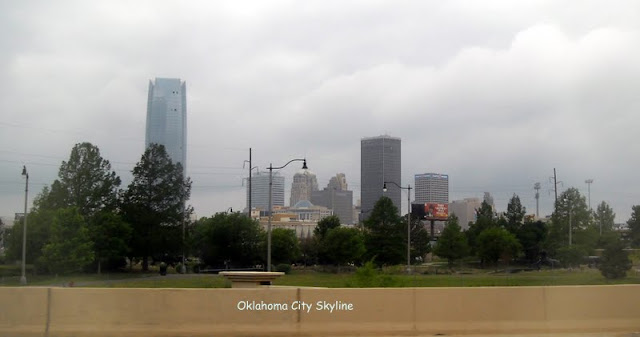 There are plenty of well-known folks who hail from Oklahoma.  Among them: country musician Garth Brooks.  Driving through Oklahoma City's outskirts we passed this sign... 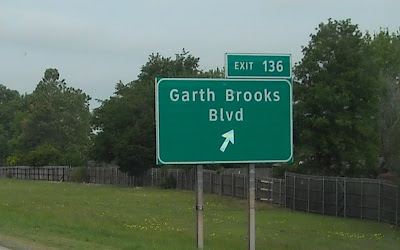 As we continued onto I-40 we found ourselves driving along the route of the Chisholm Trail. 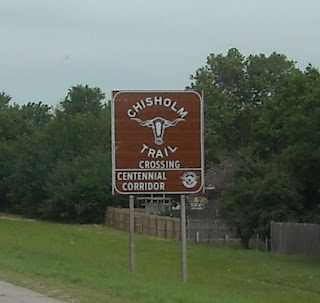 Mid-day we stopped in to look around at an Indian Trading Post (really just a gift shop) where I found two T-shirts I couldn't live without. One has Oklahoma on the front; the other, Route 66.  No doubt you'll see them in later posts. Incidentally, since leaving Oklahoma City, we are traveling along Route 66 and trying to learn more about it's history and the landmarks along it.


It was still dry, warm and sunny when we stopped at a Texas Welcome Center which was some 100 miles into the state along I-40. We ate dinner, walked the dogs and found the dry hot wind to be a formidable foe. This is where I checked our email and found a message from my friend Marcella. She and Landon are heading east from Albuquerque toward home in Ohio. Whoa! We're on a collision course!  This is great!  Meeting up with friends as we travel is always fun and we've been looking forward to seeing Marcella and Landon again ever since we parted in Utah last September.

Through a few emails, we determined we'd rendezvous in Amarillo where Wayne and I will arrive first and find a suitable campground.  Landon and Marcella arrived the next afternoon!


Mid-afternoon, the blast of Landon's Hadleys as they came into the campground was music to my ears!