The drive north from Santa Fe, NM on US Highway 84 was most unspectacular. The weather was unspectacular too -- chilly and damp, but we didn't mind because we were getting away from the dreadful windswept ridge of our Santa Fe campground.

A mid-day roadside doggie pee-pee and lunch stop prompted us to look for a destination for the evening. As usual we were traveling without a real destination. We travel that way and enjoy it. Looking at our options, we found ourselves about 3 miles from a US Army Corp of Engineers (COE) campground just two miles off the highway we're traveling.  We stopped in for the evening.

COE campgrounds are almost always pleasant, though I must say I don't know why engineers can't manage to lay out level campsites -- but I digress.  What we found at Riana Campground on Lake Abiquiu was just about what I'd call  "breathtakingly" beautiful.
The campground was nearly empty but those campers we met here this first evening were eager to welcome us.  We chatted with several couples and one beautifully original little woman traveling alone with just her dog "Button" and taking pictures. Well before sunset, the temperature (and the rain) fell to a point that we were forced inside.  Our site had a very nice view of the lake and a beautiful mountain from where I'd take this picture.   I'll talk some more about the mountain later...


Next morning the sun was gloriously bright and the sky was blue with big puffy white clouds thrown around in it.  No signs of yesterday's gloom and rain!

The Abiquiu Dam is nearby and we always like to see dams.  We learned from the campground host that the six mile ride back into Abiquiu would be worthwhile as Bode's General Store served up good food and we might also want to see the house where famed artist Georgia O'Keeffe lived.  I'm not really into art, but anytime we're in an area of an artist, writer or other famous-type person, I try to take interest and learn a little something about their contribution.

So, while Wayne was getting dressed, I took a quick walk around the campground loop from where I could get an even better view from the highest point.

We loaded Lexie and Ozzie into the car and headed out for a day of sightseeing. First stop would be the Abiquiu Dam on the Chama River built between 1956 and 1962.


We saw that Abiquiu is an earthen dam that's not very exciting. The view of the Abiquiu Lake and the surrounding mountains, however, was super!

Sooooo.... about this mountain....  It's name is Cerro Pedernal and it is famous for being so frequently included in the paintings of famous artist, Georgia O'Keeffe. Locals tell us that O'Keeffe believed she had a deal with God; that if she included it in her paintings often enough, God would give the mountain to her.  She asked to have her ashes thrown into the wind from atop the mountain on a day when the breeze would take her remains across the lake and valley below.  Her wish was granted.
Below the dam we found a gravel road on which we could drive through the canyon between the mountains alongside the Chama River.

As usual, Wayne looked at everything through binoculars as we traveled about a mile up the winding road. I kept thinking about the signs warning of rapid rushing water when the siren sounded -- meaning the dam was releasing water.   Horrors.... we'd never be found!

Back up top again, we went into the town of Abiquiu to see the home of artist Georgia O'Keeffe. Born in Wisconsin, O'keefe visited New Mexico for the first time in 1929 and later lived in the Abiquiu area  until her retirement in 1984. I am not a huge fan of Georgia O'Keefe -- her paintings just do not "move" me but that's another story -- I'm enjoying learning about her.

Turned out the O'Keeffe home couldn't be seen from the road except through a tiny opening in the rear so I do not have a photograph to share.  Abiquiu turned out to be a horribly depressed shanty of a town, if what we saw was all there was to it.  Its poverty might be an inspiration to some but it was simply depressingly awful to me.  Here are some of the building there.


From a high point we got a glimpse of a beautiful white mountain that I'd heard someone say was an inspiration to O'Keeffe.  Perhaps this is it. 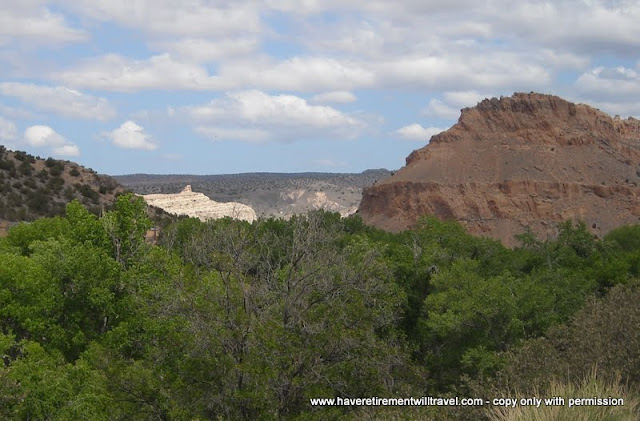 Back on Highway 84 again, we stopped in at Bode's General Store for lunch. The menu was interesting and the food did not dissapoint.

The entire afternoon awaits us and we'll certainly need to walk off some of this lunch so, after perusing the wares in Bode's General Store, we'll find another place to explore...
Email ThisBlogThis!Share to TwitterShare to FacebookShare to Pinterest