Huachuca City, Arizona is a tiny town nearer to Mexico than to Tuscon but in that general area.  The nearest landmarks are Nogales, AZ and MX, Tombstone, Bisbee and Fort Huachuca, where much of the US Army Intelligence is based.  Copper was mined nearby and there are museum and tours of the Bisbee Urban Outpost. The nearby Cochise and Chiricahua Apache Stronghold is a natural granite fortress used as a haven from the U.S. Cavalry. This and the Dragoon Mountain Range are easily viewed from our campsite. Near here, Fort Huachuca was built to fend off American Indian attacks. I don't even see any American Indians here now.  Pity. 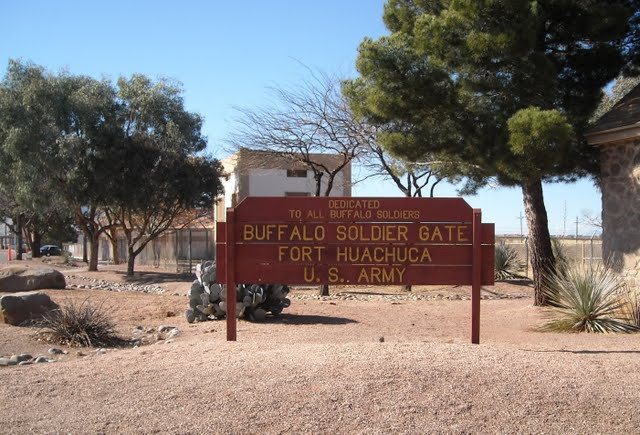 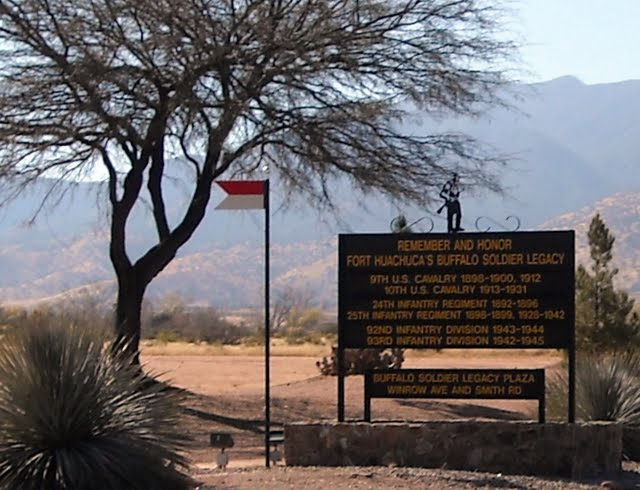 We only drove about 45 miles from Willcox to Tombstone Territories RV Park in Huachuca City.  This campground is better than any we've seen lately.  There are about 100 sites, each is level and clean, flat and has a concrete patio and picnic table. The terrain is typical for this area, no real trees as we know them, just scrub and desert bushes and no grass in sight anywhere.

The first afternoon here was cool but sunny.  Temperatures were in the 60's that day and went downhill steadily each of the next three days ending with blizzard warnings and high wind advisories. The wind has been at 50 mph at least. The winds subside the next day, but the sun is scarce and the temperatures are unbelieveably cold. We must unhook our waterline at night to keep it from freezing.  New Years Eve day brought intermittent blowing snow and ice. Freezing by nightfall. New Years morning, we're at a horribly cold 20 degrees with a wind chill factor that feels like 10. Uck.

Lexie's short walks have been sheer torture her and me both.  She can hardly stand up and the rain blows into her face. She could use a good face washing but it's so cold, I wouldn't dare get her wet.  She must go around with a dirty face though I do try to keep her brushed.

The next few days are expected to be no warmer than 40's and nighttime temperatures will be as low as 20's.  Bummer. We've got to find warmer weather as soon as this terrible wind subsides. Then these tumbleweeds are blowing outta here.
Email ThisBlogThis!Share to TwitterShare to FacebookShare to Pinterest