Eureka to Redding and Stuff Along The Way

The trip from Eureka to Redding was 150 miles; all of it along California 299 Highway that winds  across three mountainous Coastal and Cascade ranges twisting alongside the Trinity River reaching elevations in excess of 3500 feet. The Salmon and Trinity Mountains are to the north, the Trinity National Forest and Whiskeytown Shasta-Trinity National Recreation Area are to the south.  This is beautiful country, dense with redwood trees, deep ravines and frequent sightings of white water in the river rushing along far below.  I take in all the sights as Wayne wrestles our 60' rig around one hairpin curve after another.  Our departure from Eureka was around 10:30 a.m.-- later than we would have liked -- as we prefer to be settled in a new campsite before 4 p.m. but it just wouldn't happen today.  We were both glad to be getting away from the overcast cold Pacific coast and we felt warmer within the first hour of travel even though we drove through mist and clouds in higher elevations.

We got a glimpse of the snow covered mountains of the Cascade Mountain range sooner than we expected.  It's odd to be in such warm temperatures and see the snow caps in the distance. 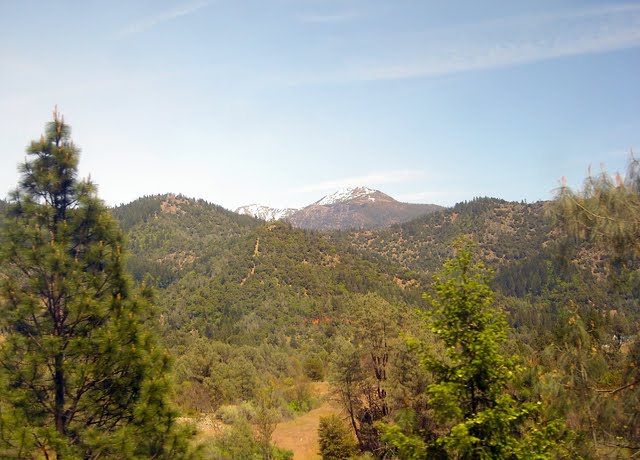 As usual, Lexie sleeps comfortably in my lap while we ride. Today, however, she slides around on the sharp curves and I had to hold her a little closer.

Weaverville was an especially nice looking little place and we would have stopped to look around if we hadn't been in the big rig.  Weaverville was named in 1850 by John Weaver, who won the privilege of naming the town in a game of chance. Two weeks later, John Weaver left the town that bears his name and was never seen or heard from again.

Trinity River runs through this area. It was named in 1848 by P.B. Reading who found gold here and subsequently named the river.  Many people still mine for gold in the Trinity River.

We ran across an interesting apparatus along the roadside and learned about the LaGrange Hydraulic Gold Mining Company's purchase of a mine on Oregon Mountain. This was the largest placer mine in the world and operated from 1862 to 1918. Water was brought from Stuart's Fork through 29 miles of ditch, tunnels and flume and delivered to the mine pit under a 650 foot head. A "monitor" like the one here did the job.  Over 100,000,000 yards of gravel were moved and 3,500,000 dollars in gold produced.
Result:  A mountain two miles high and the size of six football fields is literally washed away.