Eureka! I Found It!

Wayne has a curious interest in two Northern California cities: Eureka and Redding.  We've decided to check out both of them.  From Garberville we drove north on US 101 to Fortuna and then to Eureka.  The Eureka brochures suggest we'll have a good chance of seeing bald eagles, harbor seal colonies and other wildlife in addition to a treasure trove of  interesting architecture,  nice waterfront, Old Town and Woodley Island. That sounds good.

We pulled into Eureka in the late afternoon and settled into our over-hyped and over-priced campsite at one of only a handful of campgrounds. We had been surprised to see a slightly run-down town as we drove through on US 101 but we were not discouraged. 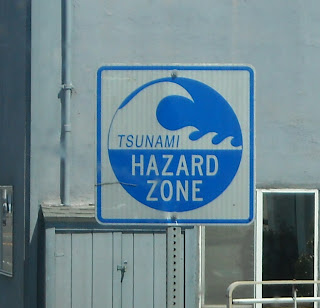 Next morning our initial bad impression only worsened. Very cool, damp weather with light rain is expected all day and it chilled us to the bone.  We explored the town.  Eureka is just a few feet above sea level and the whole area is a Tsunami Hazard Zone. Those darn tsunami hazard zones worry me these days...

Our ride across the bay to the Samoa Dunes Recreation Area proved disappointing as we drove south first and then north. Not much except marsh lands to the north and miles of sand dunes and sea oats being destroyed by ATV and off-road vehicles.  We did find some historical data about the WWII gun emplacements, the native Indians of the area and the history of the exceptionally hazardous channel into Humboldt Bay.  Dozens of ships have been destroyed trying to navigate the treacherous waters there.

The Old Town of Eureka does have some nice Victorian buildings but there just weren't enough of them.  There seems to be a disproportionately large number of homeless people in this otherwise "touristy" part of town.  As a matter of fact there were pan-handlers all over Eureka. I'm sympathetic to homeless people and those down on their luck but I must say I was a bit uneasy about the groups of young adults who appeared otherwise healthy enough to be working.


So alas... no seal, no bald eagle and "no great whoop" in Eureka.  We stayed two nights. The morning of departure we had our tow rigging checked as our left blinker and brake light on Blackie are inoperable when towing her.  A two hour delay and we're rolling again.