The State of Washington operates a passenger/vehicle ferry across Juan de Fuca Strait from Port Townsend, on the upper peninsula to Coupeville, on Whidbey Island. We took the mid-day run, loading the whole rig onto the belly of the ferry for the short 30 minute cruise, staying inside the coach with Lexie and having lunch.


Captain Vancouver of England explored this area and named Deception Pass specifically because he originally believed he pass was a small bay or inlet until one of his men, Joseph Whidbey, discovered the land was actually an independent island. Having been deceived by the hidden waterway, Captain Vancouver named the waterway "Deception Pass". It's a beautiful place. Puget Sound is east of the islands.

Our destination on North Whidbey Island was the Deception Pass area.  This is the hidden pass between Whidbey and Fidalgo Islands.  We stayed two nights at an Oak Harbor campground and enjoyed some, but not enough of the beautiful area scenery.

The tiny town of Anacortes on the north end of Fidalgo Island was especially beautiful. 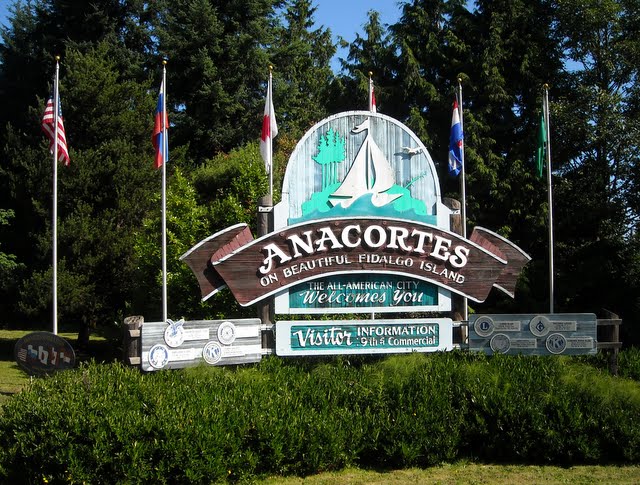 From here we'll travel east on Highway 20 to the mainland; then north to the Bellingham, Washington area.  We hope to get to British Columbia within a day or two.
Email ThisBlogThis!Share to TwitterShare to FacebookShare to Pinterest