Summer sunshine finally found us and has been our friend for over a week!  The North Olympic Peninsula is the part of Washington that's sandwiched between Puget Sound and the Pacific Ocean. The Strait of Juan de Fuca separates Washington from Vancouver Island, BC.  We're staying in a campground just west of Port Angeles along Highway 101.


We have a nice view of the mountains and snow can be seen on one side of the mountaintop across from us. Seems we could throw a rock onto it, but I'm sure that's not true.  The campground is located at the westernmost edge of Lake Sutherland which is separated from Crescent Lake by a strip of land. 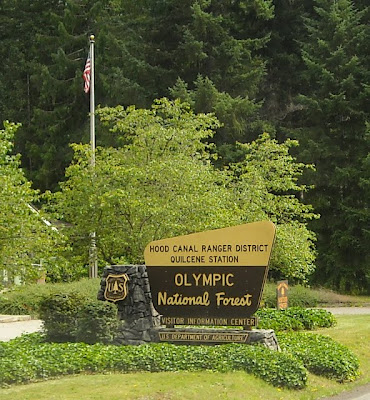 This is the area of the Olympic National Park with nearly one million acres designated as a wilderness protected area. Remember, there are over 390 National Parks and we're trying to see most of them! 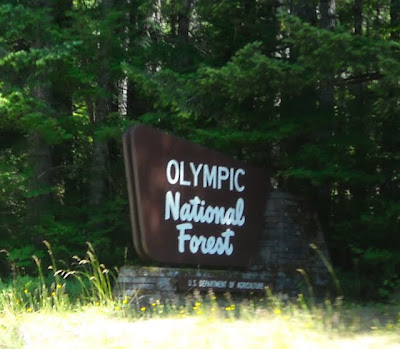 One of the first noticeable things about this area is that everything seems to be in high-definition. I suppose it's the clear air coming in off the Pacific but the scenery, the sky, the forests, the waterways and even distant mountains have a "crisp" look.

On our way into this area last week we saw a American Eagle soaring above a lake. There are also Elk warning signs along the roads, but we've not seen one.  Deer can be seen along the roadsides. This area has rain forests, hot springs, Indian reservations, bluffs, beaches, crystal clear lakes, massive trees and lush ground vegetation.

The next town over, Sequim (pronounced as Skwim) is sometimes referred to as the "blue hole" because it is situated in the rain shadow of the Olympic Peninsula and gets only about 17 inches of rain each year. This climate is perfect for growing lavender and Sequim has a huge lavender festival every July -- we missed it by a couple of weeks.  There are seventeen local farms on the lavender tour.
US 101 circles the Olympic National Park from Hood Canal on the east to the Pacific Ocean.  We took a day trip along the beautiful, deep, clear blue Crescent Lake yesterday.   Here are some pictures we took:


Crescent and Sutherland Lakes are Glacial Lakes. Their crystal clear water is a result of the lack of nitrogen which keeps algae from growing. It is thought that the two lakes were a single lake at one time, but a great landslide, a gazillion years ago, separated the two.


The small town of Forks isn't far from here, right along US 101 within 60 miles.  We're not fans of "Twilight" and if our daughter-in-law hadn't dressed as a character for Halloween a few years ago, we wouldn't even know of it's existence.  Nevertheless, we read that Forks is the imaginary setting for Twilight.  We didn't make it there today, I'm sorry to say. I would have taken pictures of some of the sights -- even though the movie wasn't filmed there. It's all make-believe.  After all, I think it's about vampires and werewolves!