Oregon's tallest peak is Mount Hood and it's on our list of places to see today as we take another day trip on what's called the "Mt Hood Scenic Loop" -- we'll drive counterclockwise around the loop from Corbett, crossing the Sandy River from Troutdale and going through a town with a most unusual name: Boring.  My imagination went wild with the possibilities using the name but evidently the residents here don't have my comic genius. This is the only funny sign I saw: 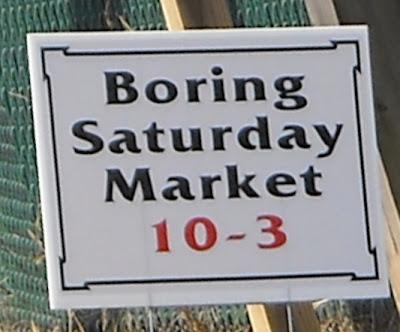 In the town of Sandy, we stopped in at the Mt. Hood National Forest Park Headquarters for a map of the area.  This is the building and that's us in the reflective glass. 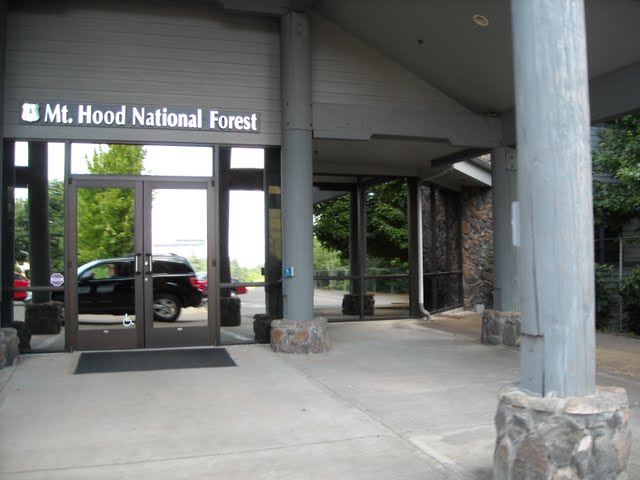 These people must have been desperate for town names as we passed through some real doozies on our way -- Zig Zag, Welches, Rhododendron and Government Camp stick in my mind. 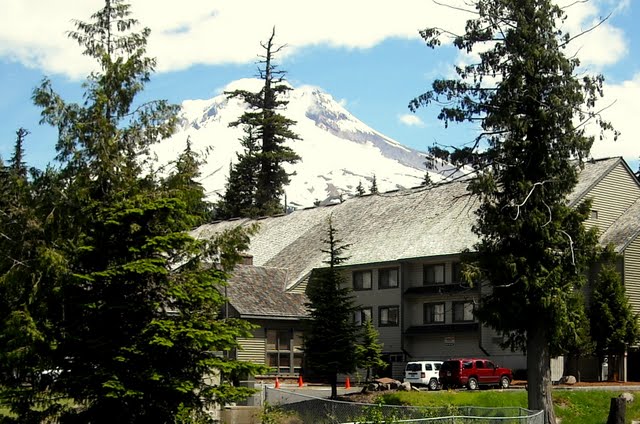 At Government Camp we took the Timberline Lodge Road up to Mount Hood. 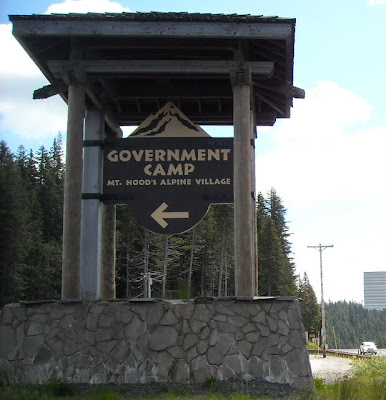 Timberline Lodge was built in the 1930's as part of the Works Progress Administration (WPA) and it is on the National Register of Historic Places. President Franklin D Roosevelt dedicated the lodge in September 1937. The lodge sits at 6,000 foot elevation on the southwestern slope of Mt Hood.

Timberline Lodge has been the setting in several films over the years including 1952 Bend of the River with James Stewart; 1960 All the Young Men with Alan Ladd and Sidney Poitier; Lost Horizon in 1973 with Peter Finch, was filmed in the parking lot.

In 1981, World War III, starring Rock Hudson, was being filmed on the property, when the director, Boris Segal, was killed after stepping into the rotor blades of a helicopter in the parking lot.

The most famous of the movies showing Timberline Lodge however, was The Shining, starring Jack Nicholson (iiitttt'sss Johnnnny).  Only an exterior shot of the lodge was used and it did not depict the property as it actually existed. No interior shots for them movie were filmed on the property.

It's warm here today but snow remains on most of the mountain. Snow sport activities are open and we saw several dozen skiers coming down the slopes.  Mount Hood's elevation is 11,245 feet, although elevation numbers have varied over the years, and the snow remains year-round. It is considered the Oregon volcano most likely to erupt with the odds at 3 to 7 percent over the next 30 years.  Not too likely, I'd say.  The US Geological Society considers it to be an "active" volcano with the latest eruption being somewhere in the vicinity of 200 years ago.

The name Mount Hood was given by Lt. William Broughton, of Capt. George Vancouver's expedition group in October 1792. Lewis and Clark were the first Americans to see Mount Hood in October 1805.

Mount Hood's peak can be seen for about 100 miles away and climbs are attempted by about 10,000 climbers each year. Since mountain climbing accidents have been recorded some 130 climbing fatalities have occured here -- the most recent being in December 2009.
Only registered guests are allowed beyond the parking lot and onto the Timberline Lodge property; we didn't get any good close looks as we were not registered guests!  Coming back down the Timberline Lodge Road to the south, we saw another beautiful white mountain peak.  Don't know what mountain it is though.... 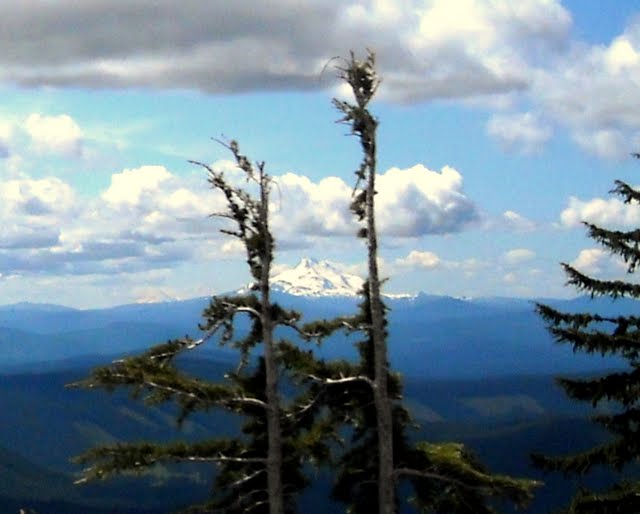 Our next stop was to see Trillium Lake and the much-photographed reflection of Mt Hood from it. The weather today is just perfect and we stayed awhile to watch some of the children as they were fishing...

Lexie seems to enjoy our day trips in the car and recently I put a pillow in the back seat for her. She seems to like it and when she isn't on my lap, she gets on it and her white hair blows as we ride with the car  windows down.
The second "third" of the Mount Hood Loop takes us north on US 35 from just east of Government Camp to Hood River through the Hood River Valley. In this area we'll see part of an area known as the "Fruit Loop" -- Hundreds of orchards, vineyards and fruit farms dot this landscape and roadside fruit stands are everywhere.
Somewhere in this area, we stopped in at Panorama Point for a high vantage point of the river, valley and surrounding mountains. 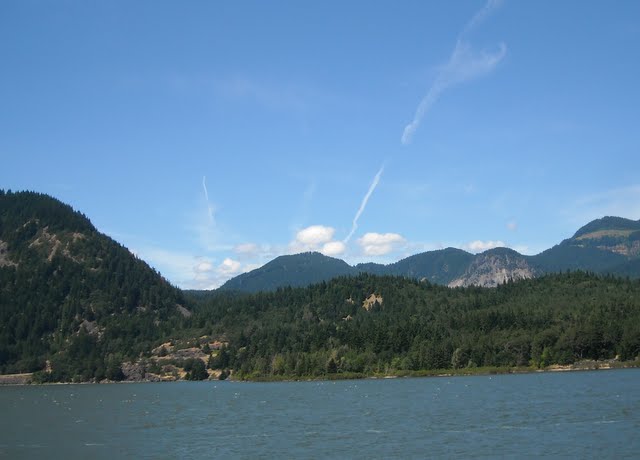 At Hood River we took I-84 east along the Columbia River Gorge again.  Since we'd seen most of this stretch already, we didn't stop again, but we did see some nice sights we had missed in our earlier drive.
Email ThisBlogThis!Share to TwitterShare to FacebookShare to Pinterest