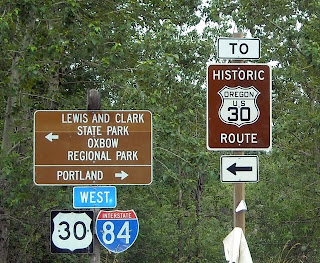 
The nearest town is Troutdale and it serves as the starting point for our Gorge day drive but on the way into town we'll travel along the Oregon Trail and the Sandy River. This river was first seen by white men in October 1792. They named it "Barings" River.  In 1805, Lewis and Clark renamed the river "Quicksand" but common use of the name "Sandy" soon caught on.

From Troutdale, we drove east on I-84 to the Bonneville Lock and Dam.  The nearby locks were processing a double grain barge being pushed along by a tug.  We were fortunate enough to see a huge osprey fly away from the water with a fish in his talons!  Too quick for a picture!   The Visitors Center has underwater viewing windows where you can watch salmon swim upstream. 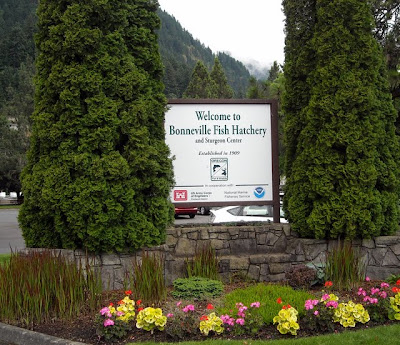 Nearby, at the Bonneville Fish Hatchery and Sturgeon Center, we did not see, but heard about Herman the Sturgeon, an 11 foot, 500 pound, 70 year old FISH!
The property around Bonneville Dam, Locks and Fish Hatcheries and a wondrous amount of beautiful plants.  I couldn't resist exercising my photographic skill on the blooms -- I'm not great at it. 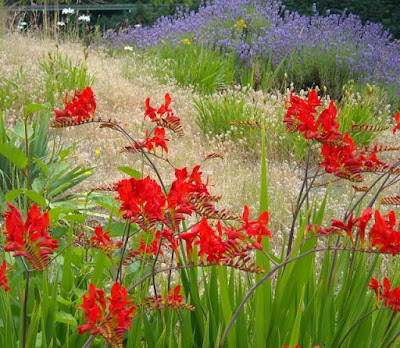 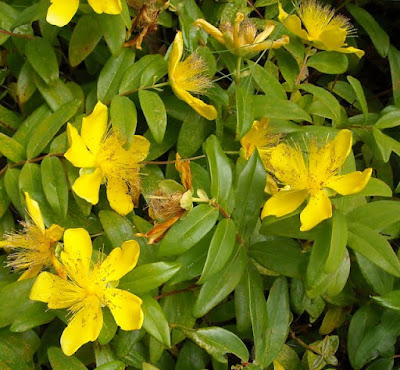 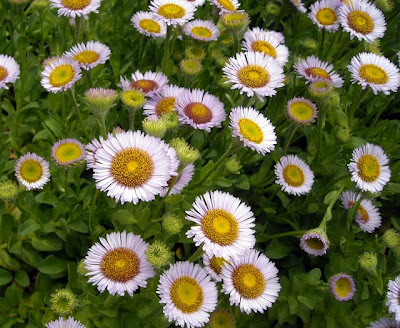 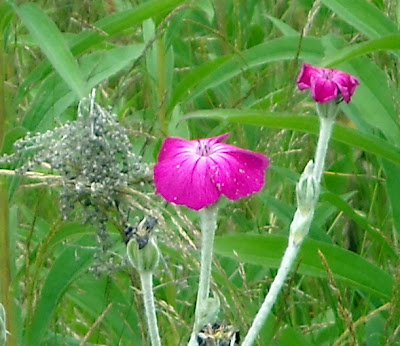 A nearby area posted an Oregon Trail Historic Marker noting the location of Beacon Rock across the Columbia River, in Washington. It was named Beacon Rock by Lewis and Clark. 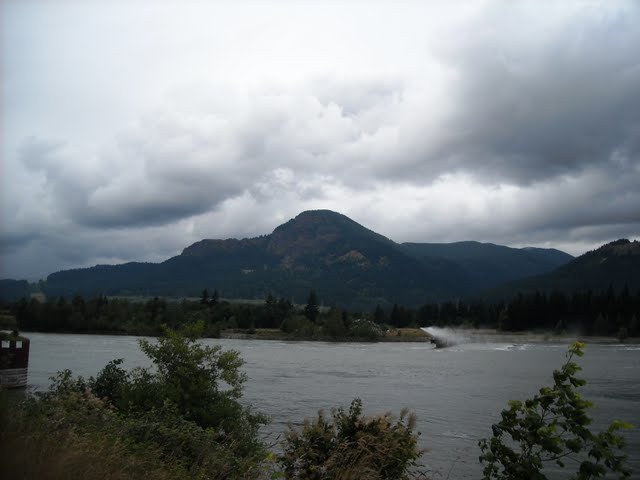 We moved along after lunch to get a glimpse of Cascade Locks, a scenic town in the heart of the Gorge.  This is the location of the Sternwheeler, Columbia Gorge, the only narrated day cruise on the Columbia River. We didn't get to see the vessel, as I suppose it was out on it's daily cruise. 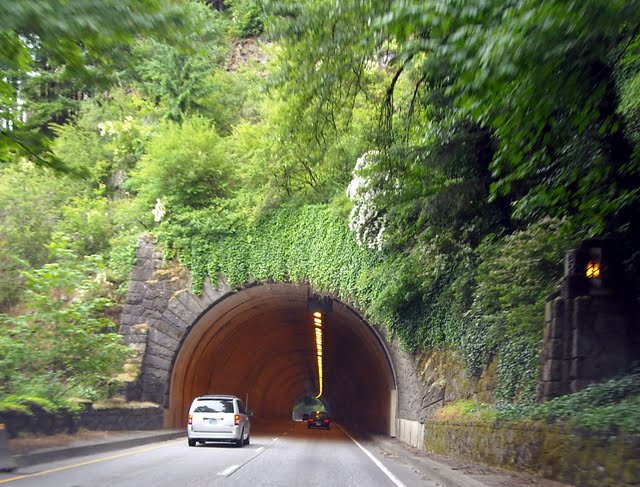 Another tunnel.  There are plenty of them in this part of the country.
There is a bridge here at Cascade Locks that caused some debate between Wayne and me. I say it's the "Bridge of the Gods" but Wayne says it's not -- that the "Bridge of the Gods" is a natural bridge as shown in the mural (not easily seen, but it's in the second photo).  But we never saw the actual natural bridge depicted in the mural or heard anything more about it.  Oh well.....

Later I read we were both right. The natural geological span bridge "was" but no longer "is" -- the man-made bridge is now known as Bridge of the Gods...  Anyway, this bridge connects Oregon and Washington across the Columbia River. 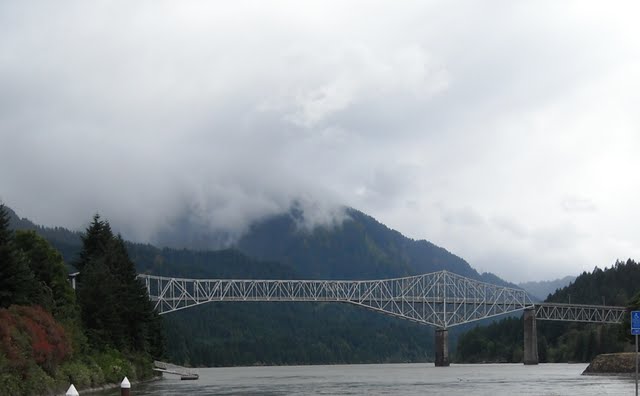 Off the interstate now, we returned westward on the Historic Columbia River Highway and snapped a photo of Multnomah Falls, the second highest year-round falls in the country. The dual-tiered falls plummets a total of 620 feet from it's origin on Larch Mountain.  We also got a quick view of Bridal Veil but the rain was coming pretty hard so we decided not to stop. It was impressive. Because of the rain, we moved along pretty quickly, but plan a return later in the week.
Moving along the Historic Columbia Highway toward Corbett, we were awe-struck by the beautiful green deep woods, heavy moss and the thick fern growth.   Suddenly we found ourselves coming onto some of the most spectacular views of the great Columbia River and rounded a curve to find the Vista House Interpretive Center at Crown Point.  This is the crown jewel of the Gorge; it was built 1916-1919 and is perched 733' above the Columbia River. It offers several tiers of viewpoints.  Here's proof: 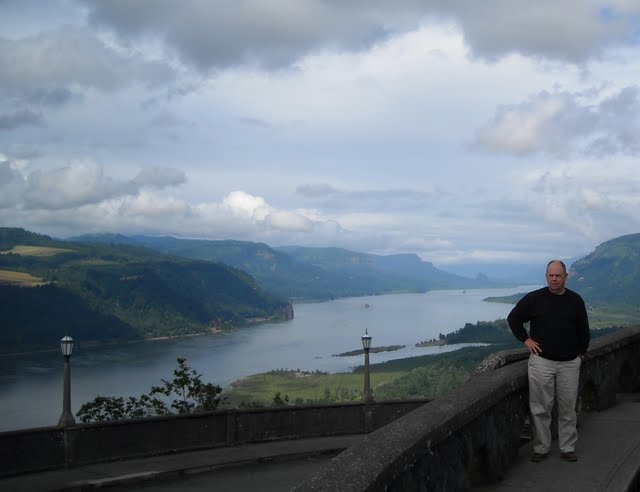 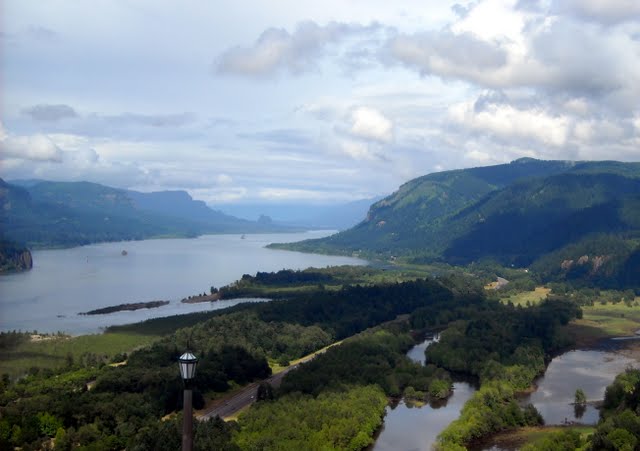