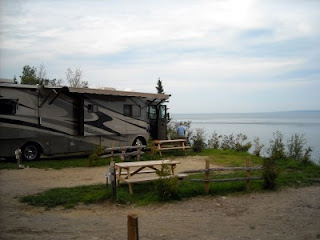 Continuing northeastward, trying to escape the heat and humidity, we traveled along the north shore of the St. Lawrence River on Thursday, July 15th. Mid-afternoon we arrived at our tentative destination, a municipal park campground along the river's edge where we found no spaces to be available. No one here speaks English, but with some pointing and drawing, we make ourselves understood and learn there's a campground that's currently being refurbished that might have space for us. We backtracked only a few blocks to the street in St. Simeon leading to Falaise Sur Mere (means cliffs overlooking the surf, I think) and found ourselves in a site with a million dollar view of the river. The front of the coach was a mere three feet from the edge. 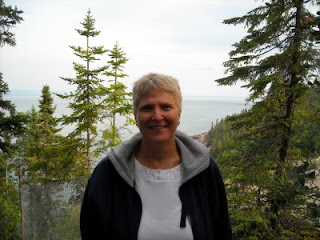 The air here was cool and the sun was warm. The proprietor, who spoke English, told us there had been sightings of the elusive Beluga whale in the river's channel. Sure enough, within minutes, we began seeing small white rolls in the water below but we were disappointed that they were just small insignificant whales. We learned later that they had been Beluga, who are small and white!

At nightfall, the fog rolled in and the air became downright cold. We added blankets to the bed and enjoyed the change. The site we were in was reserved for the coming night and we didn't care to take another, so we left at mid-day on Friday. We considered taking the rig across the river on the ferry from St. Simeon to Riviere du Loup, but changed our minds on finding the cost to be around $700. We opted instead to travel farther north to Saguenay.