We checked into the National Park campground for two nights, August 2 & 3 and took a day trip up the eastern side of Cape Breton. We'd been told about the Skyline Trail and that taking it certainly would insure wildlife sightings. We've seen only the bear on the New Brunswick roadside to this point. (We've also not had steamed lobster yet, but that's another story...) Lots of fresh sea air, beautiful mountains and sea views, but a five mile hike along a 1700 ft ridge did not produce the moose sighting I wanted. Moose signs are everywhere but NO MOOSE. We've been told they are most active at night. Anyway, along that long walk, we saw one mouse (yes, m-o-u-s-e who appeared to be trained to walk on the trail) but no moose, bear, eagle, coyote, bobcat or other wildlife. We also got a great sunburn. For 20 years I've avoided the sun and now I get burned in Canada. Just peachy. The day was great, nevertheless, even without the wildlife and after the second night at the National Park, we moved around to the western side of the cape where we stayed two more nights at Englishtown, Nova Scotia. 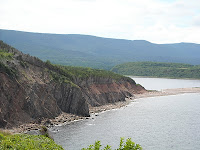