We stayed a week at Cape Lumiere and pulled out on Wednesday morning, July 28th. The front roadside slide cover didn't retract fully and caused a bit of delay in our departure. Wayne ended up on top of the coach and poked around the roller to get it back in enough for travel. We think the high winds and heavy rains caused the problem. It's fixed for now anyway.

It's not a long drive from Richibucto Village, New Brunswick to the Confederation Bridge crossing onto Prince Edward Island and we arrived by mid-afternoon. Wayne had never been to any of the Maritime Provinces and it's been many years since I visited P.E.I. with my family as a little girl, I think it was 1962. My paternal grandfather was born and lived here as a child so I was eager to see it again and P.E.I. did not disappoint. It is a beautiful agricultural and fishing island. Potatoes are the main crop. Growers place bags of potatoes along the roadside for purchase on the honor system. The landscape is beautiful. 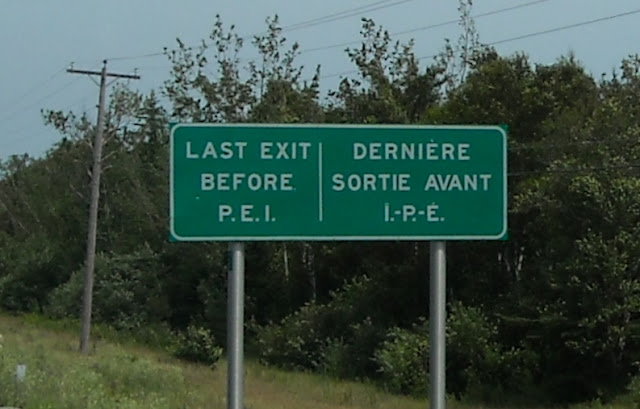 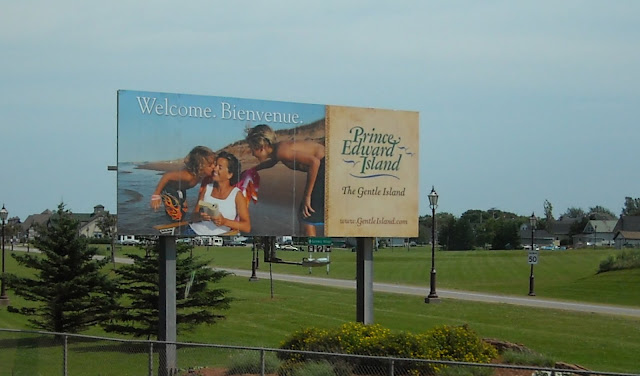 Our GPS (Miss Garmin) gave us a mis-que but we recovered and went to our planned destination and it was quite an experience. A small community known as Harrington was the setting for this park, advertised as a "Family Fun Park" campground. Following the directions, we pulled our 60' rig onto a small one lane road through a field to a "now defunct" restaurant that advertised Canadian / Persian food. We passed an old weather beaten house and finally came to a large, collapsing wooden barn. It's hard to turn 60' of motorhome and tow vehicle around so we decided to stop and check it out on foot. A woman called out from the back yard of the weather beaten house. "Keep going to the campground," she called out to us. So, we climbed back into the coach and slowly moved along onto the red dusty road to a tiny wooden structure marked "Office". We were greeted by an old man, dressed in very dirty dress pants, shirt and tie. His clothes were covered in sweat and red dust stains. He had a very heavy Iranian accent and he smelled really bad. He pointed to the rules and said "No" when I pulled out my credit card to pay. Cash only. I told him our name and he responded by shoving a registration card toward me. I said we'd stay for one night to which he replied "no" again. Two night minimum. We agreed and paid cash for two nights. At least the rate was good. 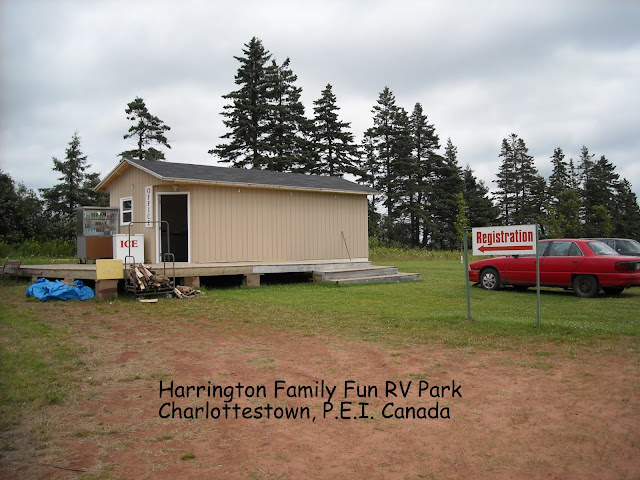 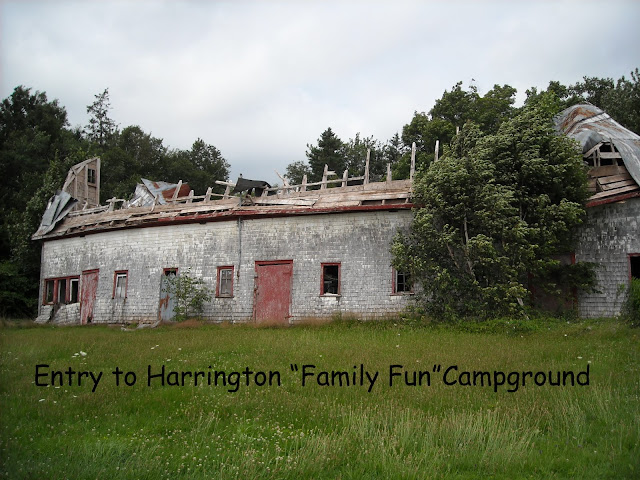 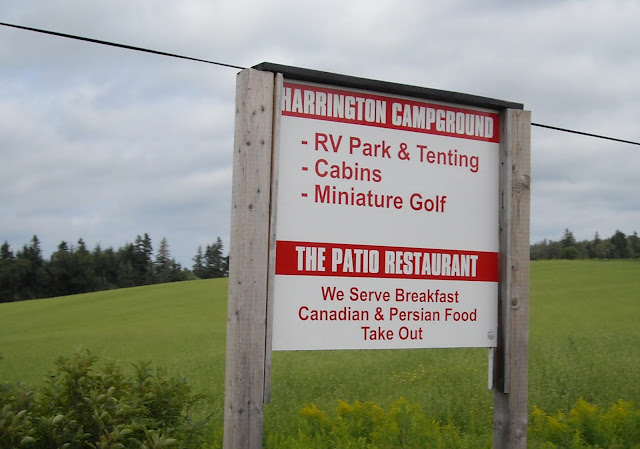 What the Harrington Family Fun Park and Campground lacked in personality and charm was made up for in site services. We had newly installed 50 amp electric, sewer and water service for $12.50 (Canadian) per night. The park had newly planted trees and grass and was sparcely populated. The mosquitos weren't so bad here, but there were lots of little swarming gnats in the early evening. We were pretty pleased with our selection though. We're cheap dates.

First we explored Charlottestown, the capitol city of Prince Edward Island. There is a touristy area along the dock and we stopped in for mussel at a wharf restaurant. From there we walked a few blocks to a local eatery for fish and chips. Here are some of the photos:


The second morning we stopped by the campground office to sign on for two more nights. We were told to "pay now" instead of later. After that we struck out to see the famous P.E.I. red cliffs and lighthouses. 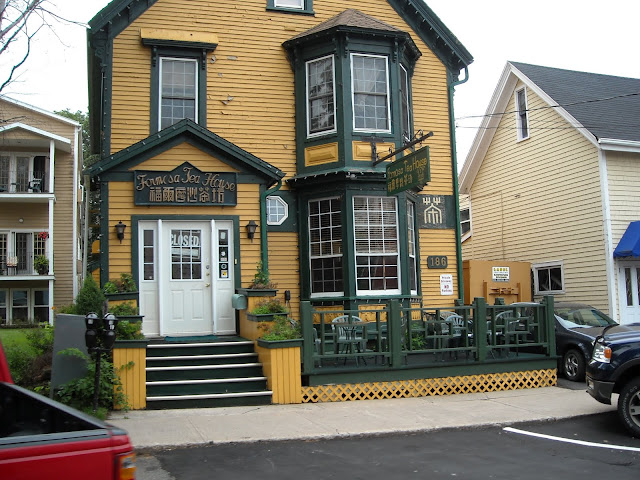 We took the southwestern route and saw more beautiful rolling farmland and potato fields on our way to the West Point Beach and Lighthouse. 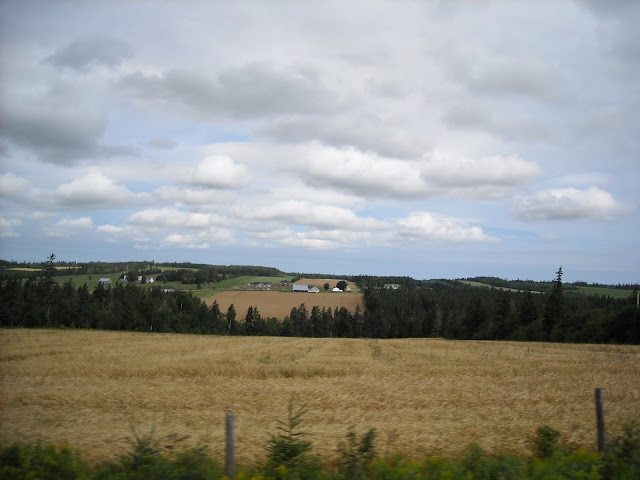 We came across the huge wind turbines (called wind mills) we had seen with binoculars from Cape Lumiere and we learned there had been an enormous wind energy study conducted in this area back in the 80's. 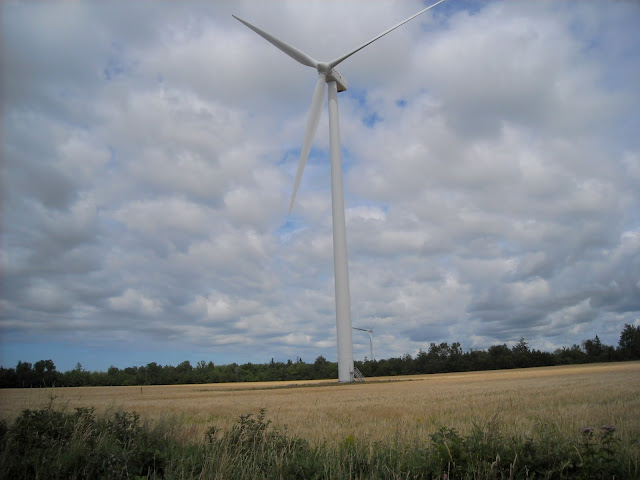 This is the only hotel lighthouse in all of Canada, I think I read. 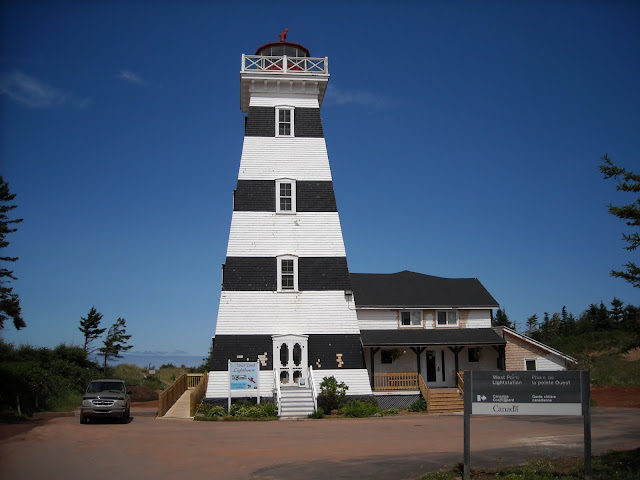 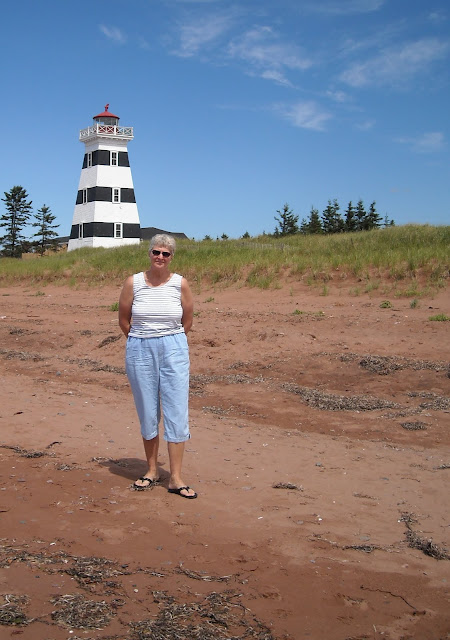 A Canadian Provincial Park was nearby and we walked through it. These parks have just 15 amps, but this one was nice with camp spots along the seashore.

We at lunch at a newly opened restaurant near the park. Skeptical at first and growing doubtful at sub-par service, we were delighted when we tasted the seafood chowder we'd ordered.
﻿

The last full day, Sunday, we took a ride to the southeast area of P.E.I. to Wood Islands. We wanted to check on the ferry to Nova Scotia. The Confederation Bridge crossing is without cost coming onto P.E.I., but is charged when you leave. The bridge toll along with the cost of fuel would be comparable to the $110 fee to take the rig across on the ferry. We watched the ferry unload and reload and leave port. 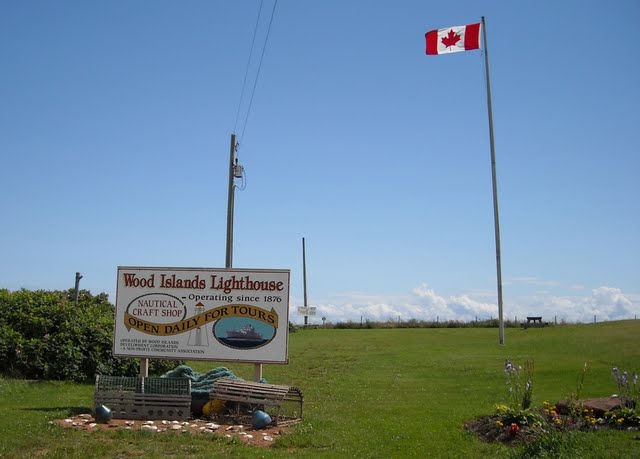 I'm going to try to load a link to the video I took as we boarded. http://picasaweb.google.com/lh/photo/lZaznyBroGeP9ZZtrKmaTqyFqS5yIYMVZbzk3GNTa9Q?feat=directlink


If you click onto the picture above, you'll see the movie I took as we drove the rig onto the ferry.
Here are some of the pictures I took too...