The day after our Lookout Mountain excursion, we explored more of Chattanooga. Here are the stops we made...

National cemeteries do something me. The evenly spaced white headstones give me a peaceful feeling. Chattanooga's National Cemetery was no exception. Actually, something about the slope of the land, spacing of the trees and naturally placed giant rock formations just stop me in my tracks.

It's history:  In 1863 Major General Geo. Thomas, known as "The Rock of Chickamauga" issued an order to create a national cemetery in commemoration of the Battles of Chattanooga a year earlier. He selected the site himself. It was a 75 acre plot on a slope of land facing Missionary Ridge and Lookout Mountain. General Grant's headquarters had been on this property during part of the Lookout Mountain "Battle Above The Clouds" skirmish.
Within three short years after its creation, more than 12,800 burials were made in the new cemetery. The dead included those fallen in battles of the surrounding areas including Chickamauga, Missionary Ridge and Lookout Mountain.

Chattanooga is the only national cemetery that has both World War I and World War II foreign POWs interred. There are 186 POWs from both wars.
When we left the cemetery we looked up the location of McCallie School. This high school was a football opponent of Wayne's high school, Columbia Military Academy in Columbia, Tennessee. He'd never been here it but heard the campus was worth seeing. Senator Howard Baker and Georgia businessman Ted Turner are alumni of McCallie.

Such a stunning high school campus. It's a Christian based boys preparatory boarding school founded in 1905 by brothers Dr. Park and Spencer McCallie with money loaned them from their father. 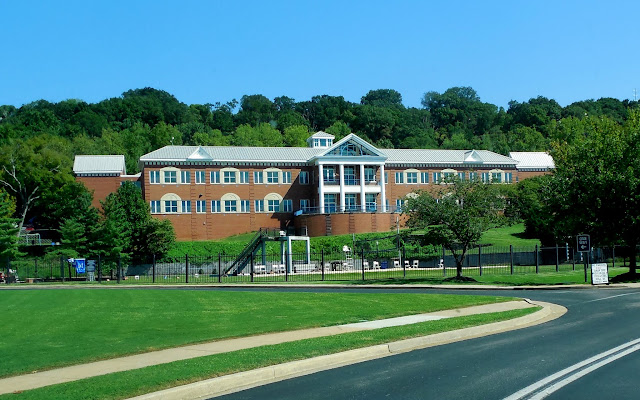 Next stop today is back in the downtown area to see the Chattanooga Choo Choo hotel where we had occasion to stay as guests many years ago.

Originally opening in 1871 at a cost of $100,000, the five-story Stanton House Hotel, built by John Stanton of Boston, proudly offered guests a dining room, barber shop, saloon, billiard hall and a bathroom on every floor. Fabulous flower gardens could be viewed from guest room balconies. It was opulent. 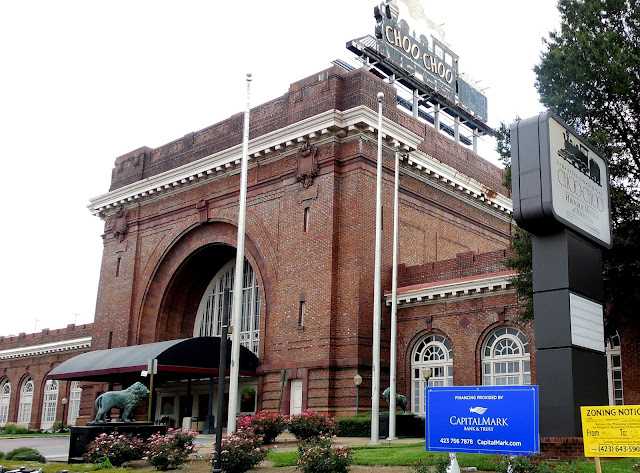 The Choo Choo Hotel is pretty run down these days -- at least from our point of view. The property is sprawling and I hope will be returned to the condition it was in when we stayed there.

We also took a drive along Missionary Ridge. This is another Civil War battle site where, in November 1863, the forces of Union General Grant defeated the Confederates led by General Bragg. Missionary Ridge overlooks Chattanooga, Moccasin Bend of the Tennessee River and Lookout Mountain. Crest Road runs along Missionary Ridge and is all residential now. It is narrow and winding, dotted with markers but there are no places to pull over to read the markers. There are no walkways or even enough space to stand to read the markers. Seems a shame.

This Civil War Battlefield is south of Ft Oglethorpe, Georgia and has miles of fields of monuments. We mostly just drove through enjoying the pleasant temperatures and serenity. We did make one stop where we took Lexie and Ozzie for a walk around an area known as Brotherton Field. 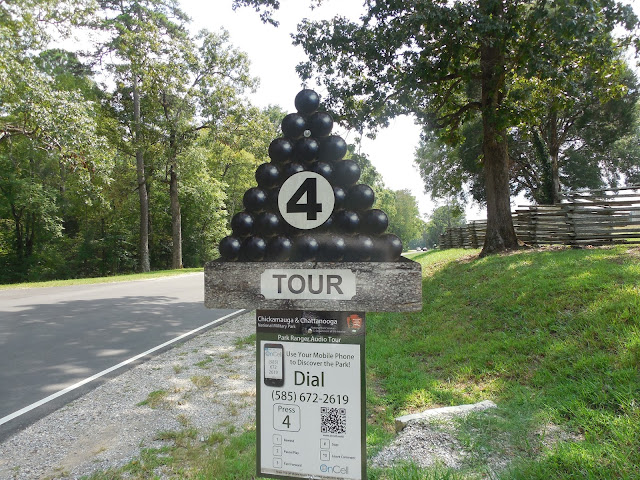 Another afternoon Lexie and Ozzie explored Coolidge and Renaissance Parks across the river from Downtown Chattanooga.  As a bonus, we found a Publix Supermarket there.
Email ThisBlogThis!Share to TwitterShare to FacebookShare to Pinterest