From Honeycomb Campground, Grant, Alabama      It was a short drive from New Market to our destination campground at Guntersville Lake along the Tennessee River between the towns of Grant and Guntersville, Alabama. The route to get there was quite a challenge though. We started out on a nice enough roadway that changed to a narrow one without lines. Those lines. We've grown to recognize one thing for certain... if a road doesn't have painted lines, it will lead to trouble. And that it did. A major road construction detour (through a rural neighborhood) followed by five single lane bridges, one with a weight restriction less than half our coach weight.

Honeycomb Campground on Guntersville Lake is a TVA property. Many of the campsites are right along the lake shore... ours was one of them. The spacious sites are gravel and could use a bit of leveling. None of the short term sites have sewer connections. I really like this campground and indeed, the whole area.  I was told by one of the campground employees that until about 2009, the campground had a pretty awful reputation and was filled with permanent residents living as though the campground was a trailer park. At the end of a lengthy contract, TVA contracted with a new management company who has turned the park around.

This whole area is an outdoor enthusiast's dream with water everywhere. The campground has rental pontoons, fishing boats, canoes, kayaks and possible wave runners. There is a nice beach for campground guests and outside guests are kept to a minimum with fees for entry and additional cars.

But enough about the campground. We are here for a reunion of classmates of the 1965 graduating class of Columbia Military Academy. Several of Wayne's closest friends will be here and he always looks forward to these gatherings. More so as he ages. On Friday he met with some of the guys who had arrived early but the main gathering was Saturday afternoon.


The reunion was hosted at the lake home of Bob and Kim Bell and the setting was relaxing and comfortable. We continue to be amazed at the low temperatures that are so unusual for this time of year in this area. 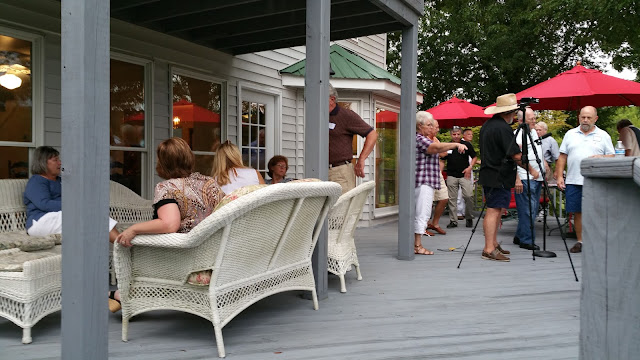 Ernie brought audio video equipment and recorded short interviews with everyone. We look forward to seeing the final result.  Moments after the recordings were completed, the skies opend and torrents of rain fell for until after dark.