It had been a really long time since I'd been to Rock City on Lookout Mountain. It's one of America's great private gardens and family attractions and it's known to all by those red barns with black roofs advertising simply "See Rock City"....

After a few hours at The Incline and Point Park on Lookout Mountain, we drove over to see Rock City. Again, there were very few people and the weather remained perfect. Parking was a breeze. I checked on tickets: Adult admission tickets to Rock City are about $20 each. Annual Passes are sold for about the price of two single-day tickets and allow ticket holders to visit Rock City Gardens, the cafe and annual events like Shamrock City, Fairytale Nights, EarthDayz, the Southern Blooms Festival, Summer Music Weekends, Rocktoberfest and the Enchanted Garden of Lights for a full year, though some restrictions apply. We loaded the pups into their stroller and headed to the ticket gate.  There are no discounts for old people. Darn. 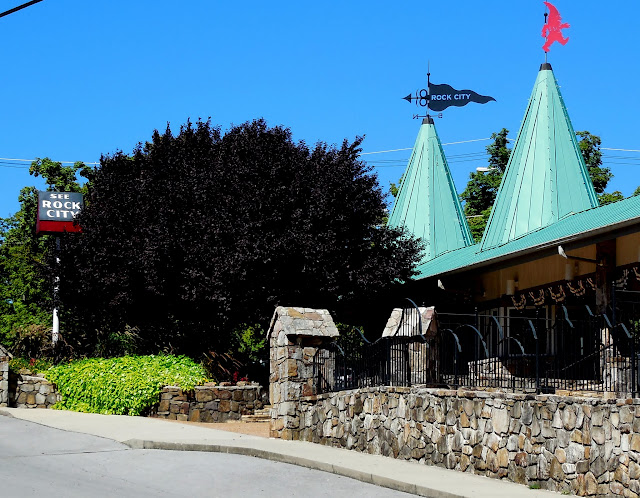 In 1823 two missionaries came to this area to share their religious beliefs with the local Native Americans. When one of the men reached this part of Lookout Mountain, he wrote in his diary about the natural placement of the rocks looking as though they had been laid there purposefully to serve as roads and streets. That's how Rock City was born. It's been in operation since 1932.... more about that below...

Dogs are welcome at Rock City as long as they are not aggressive, on leash, under control and picked up after. Lexie and Ozzie rode in the stroller some of the time and they walked other times, depending on the terrain. 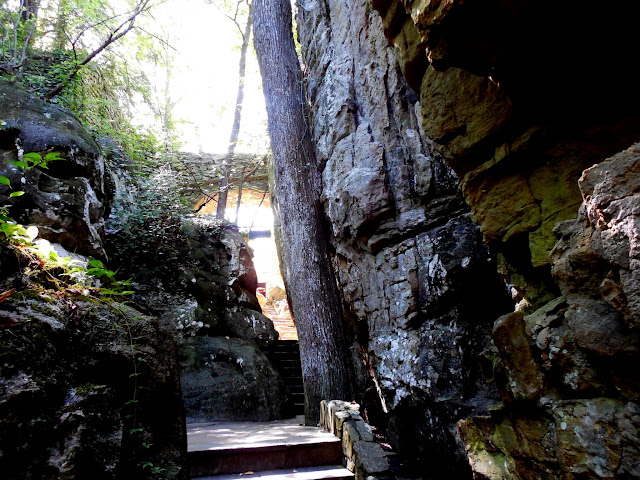 A young employee gave us a send-off from Garden Gateway by telling us that it was okay to leave the dog stroller behind. She told us there were some tight squeezes along the way where the stroller wouldn't fit but if we wanted to take it along anyway, she felt sure we could manage. The stroller folds and Wayne said he would carry it through the tight places if I would lead Lexie and Ozzie on their leashes. 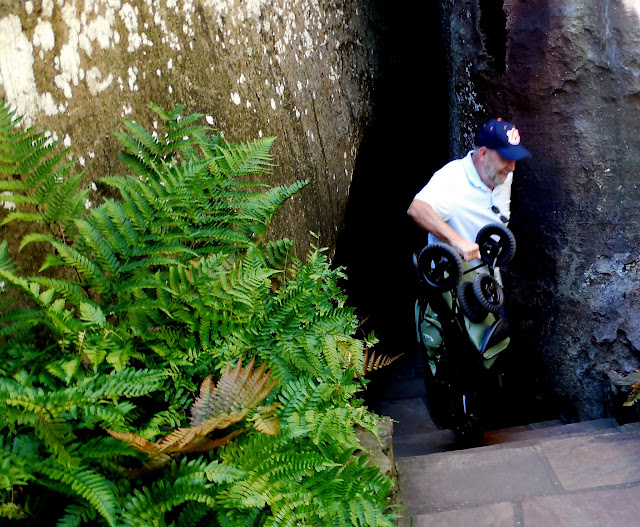 Well, the girl at the Gateway was right and wrong. There were plenty of tight squeezes but there were still more areas of steps to go up or down. Wayne ended up carrying the folded stroller over a much greater distance than the dogs rode in it.

What the gal at the Gateway didn't tell us was that there is a clear, ADA compliant walkway that goes directly through the park to Lovers Leap, our destination. All she would have had to do was point us to the left instead of pointing us straight ahead.

So we trudged along carrying the folded stroller along for quite a distance. It never occurred to us to look at our pocket guide where the ADA walkway was clearly marked. We could have returned to to the Gateway and taken the flat walkway much easier than going ahead. We were going to be exhausted if we ever reached Lovers Leap. We stopped at one directional sign to catch our breath and again ran into Toby, the young man we had met earlier at Point Park. After a few minutes of map review, Toby went one way and we went another. 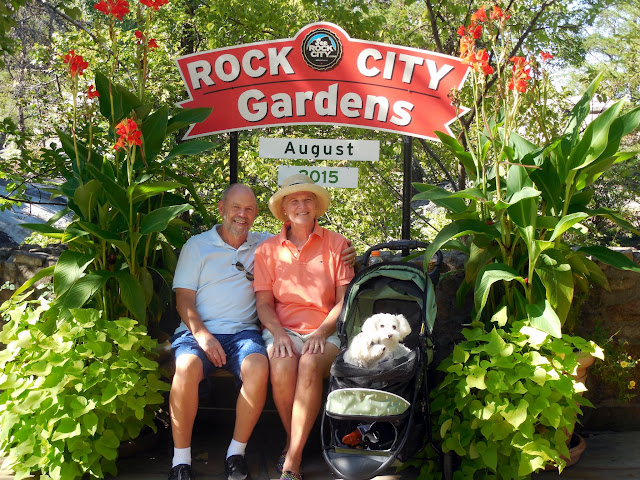 Within minutes, we were at Rock City Gardens. It was a last stop before reaching our destinations at Lovers Leap. "See Seven States" and Carter Cliffs.  Eureka.

The famous "See Rock City" red barn advertisements were an inspiration born in the 1930's and made popular in the 1950's when more than 800 painted barn ads stretched from Michigan to Texas to Florida.

In the late 1920's, Garnet Carter, along with his wife Frieda began to develop a large walk-through garden on this private estate. In 1930 they developed the garden here. During the Depression, the Carters opened their garden to the public and later they would start one of the most unique promotional campaigns ever envisioned when they began advertising their attraction on barns along highways across the country.

Today, Rock City is preserved as one of America's great private gardens.

It was late afternoon by the time we took the ADA walkway back to the Rock City entrance. Ozzie and Lexie were enjoying being on leash but when Lexie gets too tired to walk, we put her back into the stroller while Ozzie continues on foot. This afternoon, Lexie got too near the edge of the stroller and toppled out onto the sidewalk, causing her lip to bleed.  I grabbed her up and went to the nearest bench while Wayne got a wet cloth for her lip. Not surprisingly, she seemed to recover quickly though we kept a close watch on her. For the next few days we were careful with her.


And that ended our tourist activities on Lookout Mountain for today.
Email ThisBlogThis!Share to TwitterShare to FacebookShare to Pinterest