Our last afternoon at Raccoon Mountain happened to be Lexie and Ozzie's bath day. We followed up those baths with a ride in the truck for three reasons... 1. They like riding 2. They were pretty unhappy about the baths, and 3. Nature's hair dryer works best.

Leaving the campground, we took a left and headed upward onto Raccoon Mountain. The truck temperature gauge showed 92 sweltering degrees. With windows open the dogs' hair dried fast. We made a right turn, following the signs to Raccoon Mountain's TVA Pumped Storage Plant, not knowing what we'd find. As we ascended and the tree shade fell across the roadway, the temperature gauge started to drop. 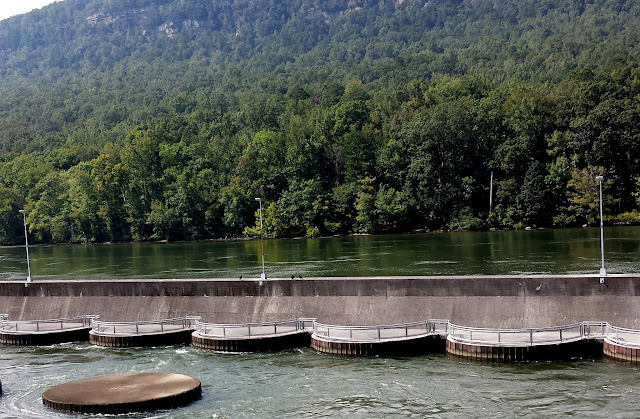 
The reservoir covers 528 acres. There's a 230' high, 8,500' long dam that turned out to be the largest rockfill dam the TVA ever built. The whole place is like being in a James Bond movie -- everything is huge.

This storage plant was closed from 2012 to 2014 for some $90 million in repairs as a precaution because of cracks in the rotors inside the generators' magnetic field. Similar issues caused a catastrophic failure in 2009 at a pumped storage plant in Austria.

Fixing the rotors at Raccoon Mountain cost taxpayers $55 million. While the plant was down, TVA installed a 500,000-pound power transformer bringing the total repair bill to $90 million.

The Visitors Center is still closed but we enjoyed a nice ride around the perimeter of the resevoir and some nice overlooks of the river and city.


Until September 11, 2001, visitors could take an elevator 106 stories down into the mountain to see the plant's workings but that's another freedom taken away by terrorists.

We will leave this area tomorrow. We're coming upon Labor Day Weekend and the campground was already booked when we arrived some ten days ago.  From here we want to drive into the mountains of North Carolina... if we can find a place that's not already full.
Email ThisBlogThis!Share to TwitterShare to FacebookShare to Pinterest