What Are Men To Lookout Mountain?

The post title is my modification to Jane Austen's famous "Pride and Prejustice" quote,
“What are men to rocks and mountains?”

From Raccoon Mountain Campground, Chattanooga, Tennessee    On Monday, August 24th, with the last of our late summer committments behind us, we left the serenity of Honeycomb Campground at Guntersville Lake in north Alabama.  There's nothing on our calendar until we rendevouz in Abbeville, Louisiana with friends. That gathering will mark the beginning of a ten month journey scheduled to take us to Alaska next summer.  More about that as the plan develops.

Unseasonably pleasant weather continues to follow us and we remain thankful for it. As true Southerners (notice the capitalization) we know how sweltering, hot and sticky summer can be in this part of the country. If we were going to choose the perfect year to spend a summer in the southeast, this is truly it. All the way back to Crossville in May, when we occasionally wore sweatshirts at night -- to the day I encountered a woman walking her dog who remarked about wearing a sweater on July 4th, we've had more pleasant days than hot ones. Sure, we've had some hot days...  but not great strings of of them.  The weather's been wonderful and it continues here.

For the next couple of weeks we'll be at Raccoon Mountain RV Park in Chattanooga where we plan to revisit some enjoyable places of childhood. Here's how it begins....

As a child, I remember riding "The Incline" with my family. It's the steepest passenger railway in the world. The trolley style cars ascend and decend a 73% grade of Lookout Mountain. Our first stop today would be at the upper station where we found very thin crowds, plenty of parking, a nice breeze and superb views.

A luxury hotel was built atop Lookout Mountain in the late 1800's. A simple narrow gauge railroad served hotel guests in the early years but later, the railroad used today was built. It was a faster and more exciting way to whisk guest up and down. It has always been known simply as "The Incline"...

The first incline cars were operated by steam engines powered by coal. In the early 1900's the engines were replaced by two one hundred horse power motors. Beyond that modification, the incline railway has seen very little change.

An observation tower atop the Incline's upper station offers views of the historically significant Tennessee River, Civil War battlefields and city of Chattanooga below. 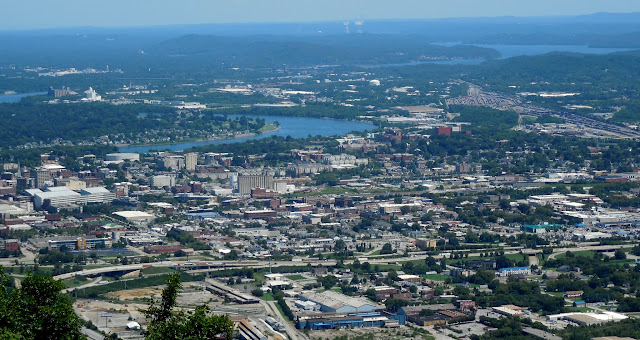 Neither Wayne nor I had an interest in riding the incline, just to see it again and to remember being here as children. We did have pizza lunch from the little cafe inside the station. Then, just a short walk down the street we found our next stop...

Chattanooga saw lots of Civil War action and details of the major battles are plentiful and interesting. As commemoration to a scrimish atop Lookout Mountain known as the "Battle Above the Clouds" Point Park was created in 1905 to compliment the Chickamauga-Chattanooga National Military Park. 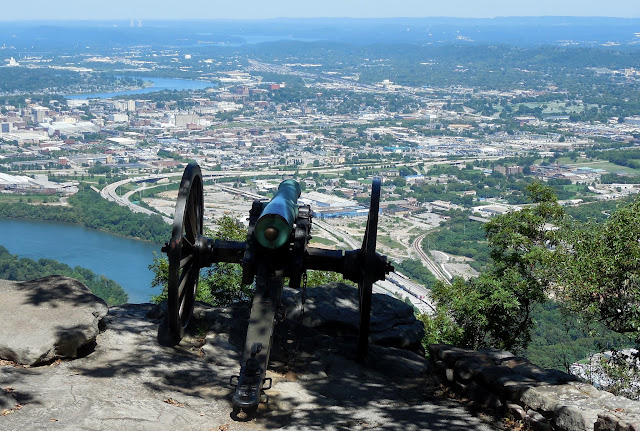 There's a famous photo of Civil War soldiers sitting on a large boulder here at Point Park. Anytime I've ever seen that picture, I think of how scared I'd be if I had to go out onto that boulder. I guess after what they'd seen, war veterans wouldn't be afraid. 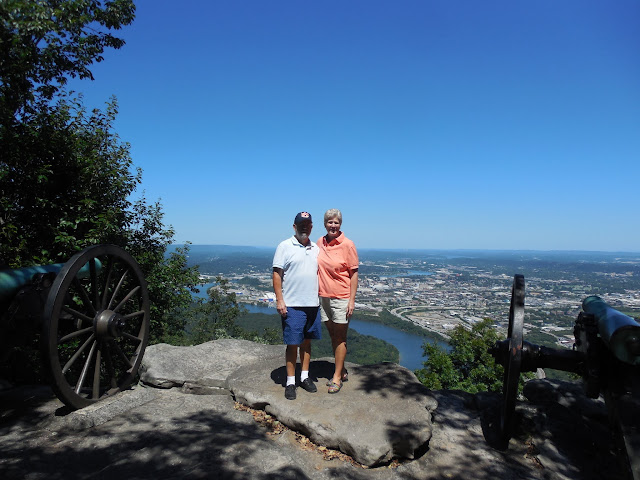 We met a nice young couple while touring the Point Park grounds and enjoyed talking with them. Toby has traveled undeveloped areas of northern Quebec and was excited at our idea of motorhome travel to Alaska. Meeting people, along with seeing the country, is the reason we enjoy travel life.