Bryce Canyon National Park was named for Ebenezer Bryce, a cattleman who settled in this part of Utah in 1875.  This majestic place sits atop the Paunsaugunt Plateau and is framed by pine and aspen trees. The lush greenery ends abruptly at the rim of Bryce Canyon though, and there, before your eyes, is an astonishing dramatic 8,000 foot drop into a spectacular, beautiful, enormous, colorful canyon of red projectiles point upward. Those are the hoodoos of Bryce Canyon.
Having been in the dry for several weeks, we had become weary of dust and very nearly didn't go to Bryce Canyon this trip. We had begun yearning for a place to shake out the dirt, vacuum the coach and wash the car.

But our campground in Glendale was so perfectly situated right there between Zion and Bryce it would not be good judgement to pass it up on this trip. So in the end, we did go to Bryce Canyon and it surely was one of our "good decisions".... with perfect weather, including a luscious blue sky. We spent the whole day and will never regret it.

Bryce Canyon is cut from layers of limestone, eroded to form the rugged terrain. It took many years of ice and rainwater to create these spindly, pointed rock spires, thin walls and unusual stand-alone hoodoo formations. 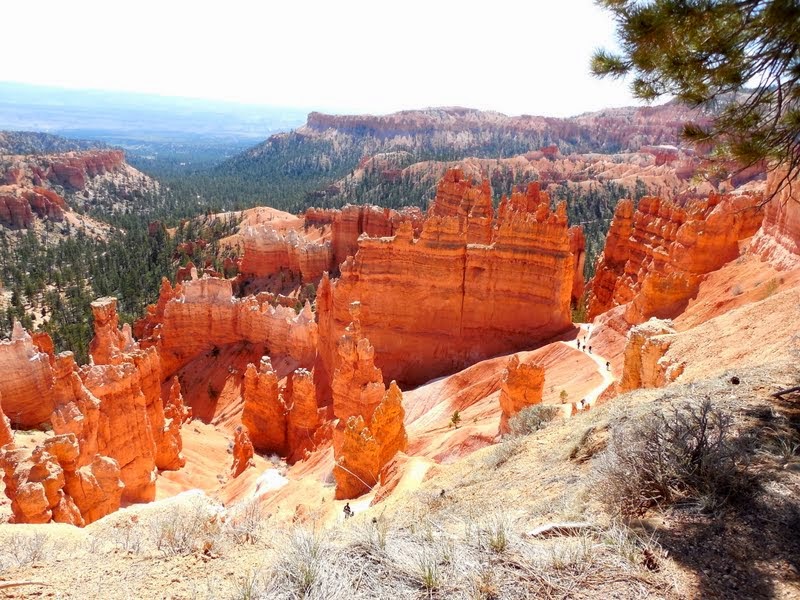 Adding to the the interesting shapes is a display of rich natural pink and white limestone that's further stained by minerals that have created an array from light pink and yellow to deep reds and oranges. The sun's light, especially at sunrise and sunset, causes the colors to come to life and almost glow.

Over 65 miles of hiking trails take visitors close to the hoodoos of Bryce Canyon and overnight back country hikes are not uncommon for those daring enough to try.  My brochure information states that 180 days each year, the temperature swings widely between freezing nights and warm afternoons. Hard to imagine being here on such a beautifully warm day. 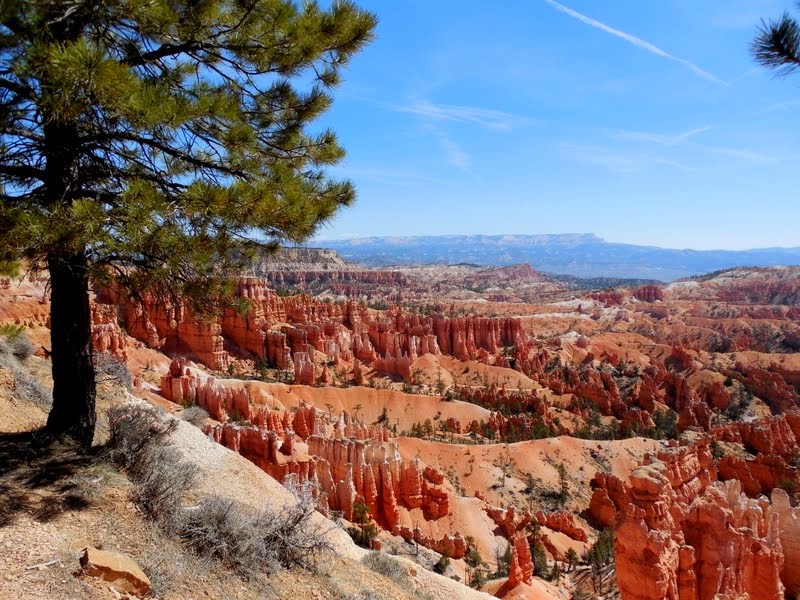 So much of what we've seen in the natural wonders out here requires looking upward -- into the high cliffs. Here at Bryce Canyon, the view is downward, into what is called the Amphitheater. 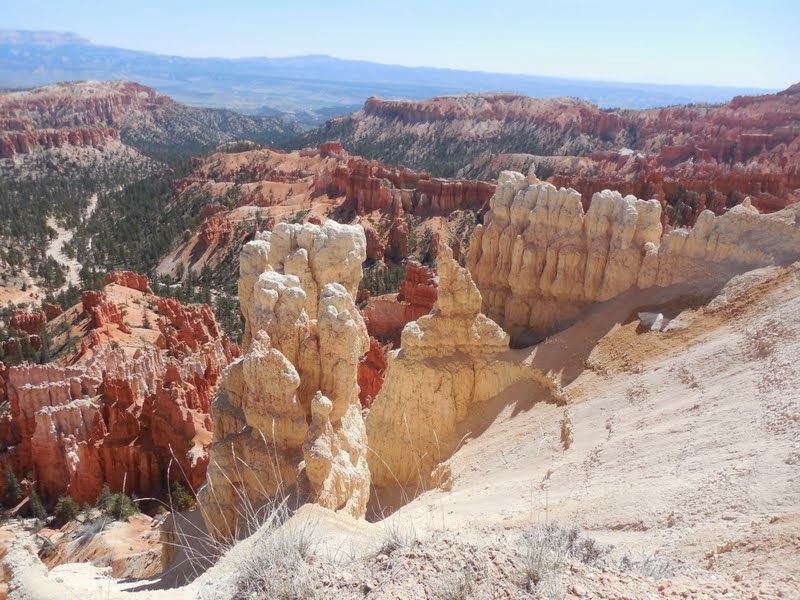 There are at least six overlook locations into Bryce Amphitheater. We stopped at five of them and reached 8,296 feet in elevation at Bryce Point Overlook. 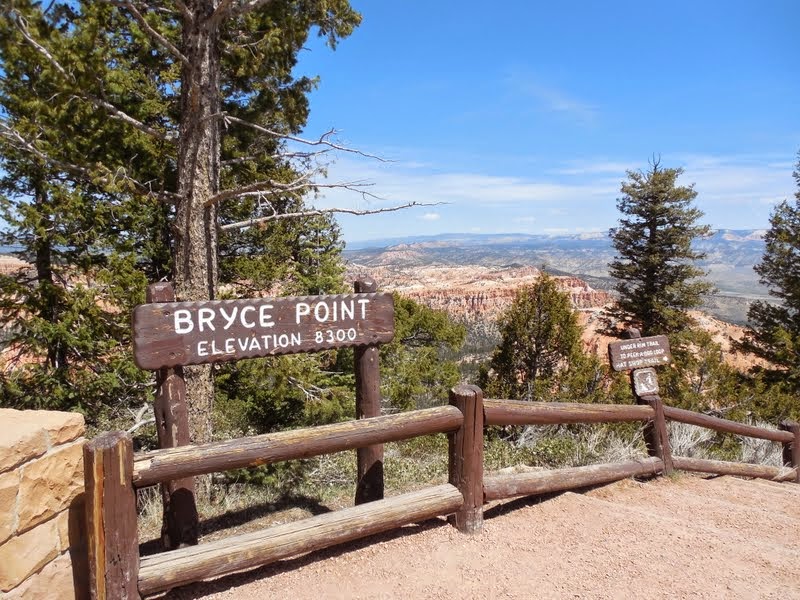 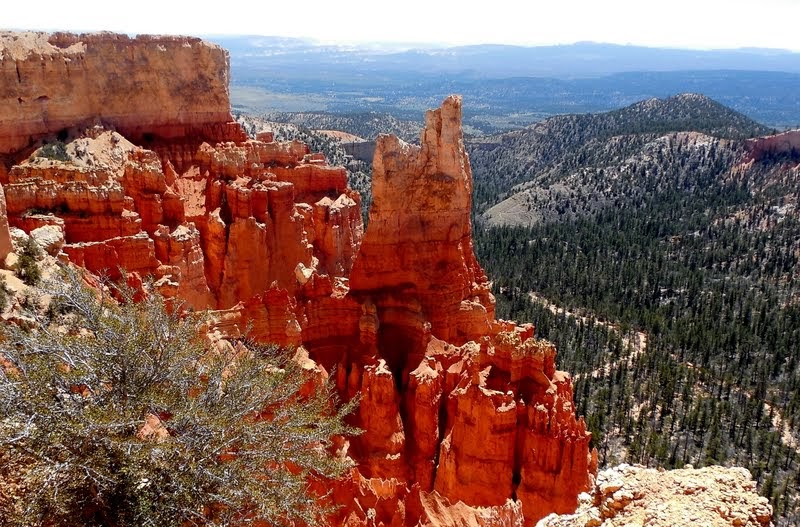 Leaving the high elevations of Bryce Canyon late in the afternoon, we returned down Scenic Byway 12, Utah's first All American Highway (designated in 2002) and stopped for still more stunning views. Hard as it is to imagine, Scenic Highway 12 was not even paved until 1985.

Reversing the view, we're now looking upward (not down as in the canyon) at the hoodoos.  This section of the roadway is much less crowded as most people are hurrying directly into Bryce Canyon, not noticing this gorgeous terrain. These views would be considered extraordinary if they were anywhere except here.  There are plenty of pull-outs for photo taking and one can easily walk right into the red rock for close-ups.  I loved being here.


But eventually, even Scenic Byway 12 would take us out of Bryce and Red Canyons and we'd return to our Glendale campground to wind up our last night in this beautiful area.
Email ThisBlogThis!Share to TwitterShare to FacebookShare to Pinterest